[e-lek´tro-līt]
a chemical substance that, when dissolved in water or melted, dissociates into electrically charged particles (ions) and thus is capable of conducting an electric current. The principal positively charged ions in the body fluids (cations) are sodium (Na+), potassium (K+), calcium (Ca2+), and magnesium (Mg2+). The most important negatively charged ions (anions) are chloride (Cl−), bicarbonate (HCO3−), and phosphate (PO43−). These electrolytes are involved in metabolic activities and are essential to the normal function of all cells. Concentration gradients of sodium and potassium across the cell membrane produce the membrane potential and provide the means by which electrochemical impulses are transmitted in nerve and muscle fibers.ƒ

Stability of the electrolyte balance depends on adequate intake of water and the electrolytes, and on homeostatic mechanisms within the body that regulate the absorption, distribution, and excretion of water and its dissolved particles. Many conditions can interfere with these processes and result in an imbalance. For example, renal disease, in which the kidney nephron is unable to function normally, causes a retention of water, sodium, chloride, bicarbonate, and calcium as the glomerular filtration rate falls. Even when the kidney structures are intact, electrolyte imbalances can result from an inadequate supply of blood to the nephrons or from imbalances of regulatory hormones such as aldosterone and antidiuretic hormone.

The effects of an electrolyte imbalance are not isolated to a particular organ or system. In general, however, imbalances in calcium concentrations affect the bones, kidney, and gastrointestinal tract. Calcium also influences the permeability of cell membranes and thereby regulates neuromuscular activity. Sodium affects the osmolality of blood and therefore influences blood volume and pressure and the retention or loss of interstitial fluid. Potassium affects muscular activities, notably those of the heart, intestines, and respiratory tract, and also affects neural stimulation of the skeletal muscles.

Assessment and nursing interventions related to electrolyte imbalance are shown in the accompanying table. 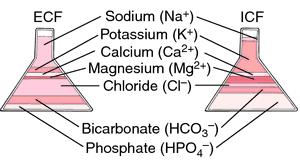 (ē-lek'trō-līt),
1. Any compound that, in solution or in molten form, conducts electricity and is decomposed (electrolyzed) by it.
2. An ionizable substance in solution.
[electro- + G. lytos, soluble]
Farlex Partner Medical Dictionary © Farlex 2012

(ĭ-lĕk′trə-līt′)
n.
1. A chemical compound that ionizes when dissolved or molten to produce an electrically conductive medium.
2. Physiology Any of various ions, such as sodium, potassium, or chloride, required by cells to regulate the electric charge and flow of water molecules across the cell membrane.
The American Heritage® Medical Dictionary Copyright © 2007, 2004 by Houghton Mifflin Company. Published by Houghton Mifflin Company. All rights reserved.

(ĕ-lek'trō-līt)
Any compound that, in solution, conducts electricity and is decomposed (electrolyzed) by it; an ionizable substance in solution.
Medical Dictionary for the Health Professions and Nursing © Farlex 2012

An ion, or weakly charged element, that conducts reactions and signals in the body. Examples of electrolytes are sodium and potassium ions.
Mentioned in: Enemas, Gastroenteritis, Total Parenteral Nutrition
Gale Encyclopedia of Medicine. Copyright 2008 The Gale Group, Inc. All rights reserved.

(ĕ-lek'trō-līt)
Any compound that, in solution, conducts electricity and is decomposed (electrolyzed) by it.
Medical Dictionary for the Dental Professions © Farlex 2012

Feedback
Flashcards & Bookmarks ?
Please log in or register to use Flashcards and Bookmarks. You can also log in with
Flashcards ?
My bookmarks ?
+ Add current page to bookmarks
Mentioned in ?
References in periodicals archive ?
However, the incidence and risk factors of refeeding syndrome-like electrolyte disturbance in premature infants remain unclear.
Risk Factors for the Development of Refeeding Syndrome-Like Hypophosphatemia in Very Low Birth Weight Infants
The most common electrolyte disturbance in our study was hypokalaemia (55%) followed by hyponatraemia (32.5%).
Frequency of hyponatraemia and hypokalaemia in malnourished children with acute diarrhoea
The Theophylline was immediately stopped and the patient closely monitored at the Medical High Dependency Unit for further fits, arrhythmias or electrolyte disturbances. Other causes of seizures had been investigated and excluded.
Theophylline toxicity--a forgotten entity
" Electrolyte disturbances, nausea, vomiting and heart irregularities can also occur from excessive consumption.
IS IT REALLY WORTH THE KICK?
"Older adults with dementia and other neuro-degenerative diseases are vulnerable to metabolic and electrolyte disturbances, such as low sodium, calcium and magnesium," Dr.
Epilepsy can strike at any age: stroke survivors are at higher risk; be aware of the symptoms, which can mimic other health conditions
Previously reported adverse side effects of NaP preparations include transient electrolyte disturbances, nausea, vomiting, abdominal distension, dizziness, syncope and renal failure.
Sudden hypotensive syncope and significant iatrogenic maxillofacial trauma: following administration of oral sodium phosphate purgative solution
Renal manifestations described in falciparum malaria have mainly been in the form of electrolyte disturbances, acute tubular necrosis, interstitial nephritis, acute glomerulonephritis and acute renal failure.
Plasmodium vivax with acute glomerulonephritis in an 8-year old
Jenny's case resulted in severe, intractable vomiting, profound dehydration to the point of shock, kidney failure as a result of the shock and severe metabolic and electrolyte disturbances. She is a sweet kid, and she will survive, but it will take weeks of IV nutrition and eventual tube feedings to correct her malnutrition and relieve the obstruction.
Teens escaping life
The presence of ECG findings including presence of STSEs of <1mm in the inferior derivations, STSEs in the derivations other than the inferior derivations, left ventricular hypertrophy (LVH), left bundle branch block (LBBB) and presence of conditions causing ECG changes (electrolyte disturbances, myocarditis, pericarditis etc.) were accepted as exclusion criteria.
The severity of ST segment elevation in acute inferior myocardial infarction: does it predict the presence of a proximal culprit lesion along the right coronary artery course?
This results in significant fluid shifts with 1 to 4 litres fluid loss, and potential hyperphosphataemia, hypocalcaemia, and other electrolyte disturbances (3).
Fluid deficits and hypotension during colonoscopy
Too-rapid refeeding is a major problem in patients with anorexia, because their bodies can become overwhelmed with the sudden intake of nutrients, leading to severe fluid retention, electrolyte disturbances, arrhythmias, seizures, coma, and death.
Anorexia patients need realistic nutrition goals
This risk may be increased if Strattera is used concomitantly with other drugs that produce QT prolongation, drugs that can cause electrolyte disturbances, and those that inhibit cytochrome P450 2D6.
British agency cites atomoxetine risks