Ptosis is the term used for a drooping upper eyelid. Ptosis, also called blepharoptosis, can affect one or both eyes.

The eyelids serve to protect and lubricate the outer eye. The upper eyelid is lifted by a muscle called the levator muscle. Inside the back part of the lid is a tarsal plate which adds rigidity to the lid. The levator muscle is attached to the tarsal plate by a flat tendon called the levator aponeurosis. When the muscle cannot lift the eyelid or lifts it only partially, the person is said to have a ptosis.
There are two types of ptosis, acquired and congenital. Acquired ptosis is more common. Congenital ptosis is present at birth. Both congenital and acquired ptosis can be, but are not necessarily, hereditary.

Ptosis may occur because the levator muscle's attachment to the lid is weakening with age. Acquired ptosis can also be caused by a number of different things, such as disease that impairs the nerves, diabetes, injury, tumors, inflammation, or aneurysms. Congenital ptosis may be caused by a problem with nerve innervation or a weak muscle. Drooping eyelids may also be the result of diseases such as myotonic dystrophy or myasthenia gravis.
The primary symptom of ptosis is a drooping eyelid. Adults will notice a loss of visual field because the upper portion of the eye is covered. Children who are born with a ptosis usually tilt their head back in an effort to see under the obstruction. Some people raise their eyebrows in order to lift the lid slightly and therefore may appear to be frowning.

Diagnosis of ptosis is usually made by observing the drooping eyelid. Finding the cause of the condition will require testing for any of the illnesses or injuries known to have this effect. Some possible tests include x rays and blood tests.

Ptosis is usually treated surgically. Surgery can generally be done on an outpatient basis under local anesthetic. For minor drooping, a small amount of the eyelid tissue can be removed. For more pronounced ptosis the approach is to surgically shorten the levator muscle or connect the lid to the muscles of the eyebrow. Or, the aponeurosis can be reattached to the tarsal plate if it has separated. Correcting the ptosis is usually done only after determining the cause of the condition. For example, myasthenia gravis must be ruled out before performing any surgery. As with any surgery, there are risks, and they should be discussed with the surgeon.
Children with ptosis need not have surgery immediately, however their vision must be checked periodically to prevent lazy eye (amblyopia).
"Ptosis crutches" are also available. These can be attached to the frame of eyeglasses to hold up the eyelid. These devices are uncomfortable and usually not well tolerated.

After diagnosing the cause of a drooping eyelid, then correcting the condition, most people have no further problems related to the ptosis. The correction, however, may still not make the eyes symmetrical. Patients should have reasonable expectations and discuss the outcome with their doctor prior to surgery.

Congenital — A condition existing at birth.
Hereditary — A condition passed from parent to child. In other words, a genetic condition.
Gale Encyclopedia of Medicine. Copyright 2008 The Gale Group, Inc. All rights reserved. 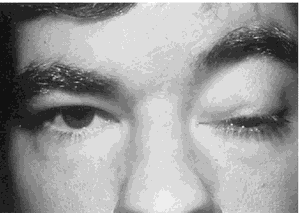 Drooping of an upper eyelid.

, pl. ptoses (tō'sis, -sēz)
1. A sinking down or prolapse of an organ.
2. Synonym(s): blepharoptosis.
[G. ptōsis, a falling]
Medical Dictionary for the Health Professions and Nursing © Farlex 2012 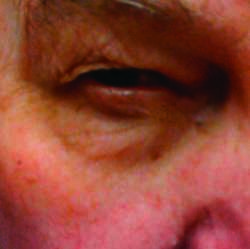 PTOSIS: involutional ptosis, associated with the loss of elasticity of the eyelid
Dropping or drooping of an organ or part, as the upper eyelid from paralysis, or the visceral organs from weakness of the abdominal muscles. See: illustrationptotic (tŏt′ĭk), adjective; ptosed (tōst), adjective
Medical Dictionary, © 2009 Farlex and Partners

Drooping of the upper eyelid. Ptosis may be a congenital weakness of the lid elevating muscle or may result from later injury or disease, such as MYASTHENIA GRAVIS, STROKE or a brain tumour. Ptosis can be corrected by surgery once the cause has been dealt with.
Collins Dictionary of Medicine © Robert M. Youngson 2004, 2005

Drooping of the upper eyelid causing a narrowing of the palpebral aperture. It is often divided into two main types: congenital and acquired. The congenital type present at birth is usually the result of interference with the superior division of the oculomotor nerve, or associated with the blepharophimosis syndrome. The acquired type may result from any affection of the nerve supply of the upper eyelid musculature, from a disease of the muscles themselves (e.g. myasthenia gravis), or from mechanical interference in elevating the eyelid due to the weight of a tumour, trauma or chronic tissue hypoxia (e.g. diabetes). The correction is usually surgical. Sometimes a ptosis crutch, which is attached to the spectacles and elevates the eyelid, may be useful. There are also special contact lenses designed to support the upper eyelid (Fig. P22). Syn. blepharoptosis. See hereditary spinal ataxia; epicanthus inversus; jaw-winking phenomenon; tuck procedure; pseudoptosis; Cogan's lid twitch sign; orthopaedic spectacles; Horner's syndrome.
acquired aponeurotic ptosis Ptosis caused by a partial disinsertion, dehiscence or weakness of the aponeurosis of the levator palpebrae superioris muscle. It usually occurs in old age and is bilateral, but disinsertion can result from trauma to one eye (e.g. following eye surgery). Occasionally an abnormal attachment to the superior border of the tarsal plate is present as well. This is the most common form of acquired ptosis. The typical treatment is by resection of the levator palpebrae muscle.
ptosis adiposa See dermatochalasis.
apparent ptosis See pseudoptosis.

, pl. ptoses (tō'sis, -sēz)
1. A sinking down or prolapse of an organ.
2. Synonym(s): blepharoptosis.
[G. ptōsis, a falling]
Medical Dictionary for the Dental Professions © Farlex 2012

Feedback
Flashcards & Bookmarks ?
Please log in or register to use Flashcards and Bookmarks. You can also log in with
Flashcards ?
My bookmarks ?
+ Add current page to bookmarks
Mentioned in ?
References in periodicals archive ?
Droopy eyelids, puffy eyebags, sagging jowls, loss of volume on the cheeks.
FILLING YOU IN ON FILLERS
Other skin symptoms linked with booze include redness between the eyes, droopy eyelids and a dehydrated complexion, which makes fine lines more pronounced.
Face it - you are what you eat; Are you happy with your skin? If the answer is no, it could all be down to some of your favourite food and drinks, as Viola Levy discovers
other skin symptoms linked with booze include redness betweent." Heyes, droopy eyelids and a dehydrated complexion.
Star student radiographer joins hospital
This can cause the skin to look grey and dry." Other skin symptoms linked with booze include redness between the eyes, droopy eyelids and a dehydrated complexion, which makes fine lines more pronounced.
Could changes to your diet help to save your skin? Not happy with your complexion it could be down to your diet, says VIOLA LEVY
Myasthenia gravis (MG), an autoimmune disease in which the nerve impulse that initiates movement fails to reach the muscle cells, causing weakness, including droopy eyelids, facial weakness, impaired eye coordination, weakness of the limbs, neck, shoulders, hips and trunk muscles.
When it's something else
Jones and colleagues collected 234 skin samples from four people ages 55 to 73 who had plastic surgery to correct droopy eyelids. DNA sequencing showed that about 20 percent of the skin cells had mutations in the NOTCH1 gene, the team reports in the May 22 Science.
Cancer mutations lurk in healthy skin: these genetic changes not always a sign of an imminent tumor
Specifically she developed bilateral lower limb numbness gait difficulties upper limb stiffness droopy eyelids slurred speech and dysphagia.On examination the patient was alert with a Glasgow Coma Scale of 15/15.
Paecilomyces lilacinus fungaemia in an AIDS patient: the importance of mycological diagnosis
Droopy eyelids, dark circles and puffy eyes tell the world you're weary, while a never-ending to-do list, trouble dropping off to sleep or burning the candle at both ends can make wrinkles appear deeper and your complexion dull.
Look lively! HEALTH
Initial symptoms often include constipation, lethargy, poor feeding, weak cry, droopy eyelids, poor head control and progressive weakness.
Infant botulism: advice on avoiding feeding honey to babies and other possible risk factors
He reported that Toth had droopy eyelids, watery, bloodshot eyes, and his breath smelled strongly of alcohol.
Reese Witherspoon 'deeply embarrassed' about behaviour
When droopy eyelids, crow's feet or fine lines make an appearance, there's no need to give up your pencils and shadows and shut your eyes to the world of make-up.
Cheat your way to peepers to be proud of, whatever your age
They are also going for blepheroplasty or eyelid surgery for droopy eyelids that removes excess skin, muscle and fat from undereyes.
IT'S ALL ABOUT THE WOW FACTOR