(K) [po-tas´e-um]
a chemical element, atomic number 19, atomic weight 39.102. (See Appendix 6.) In combination with other minerals in the body, potassium forms alkaline salts that are important in body processes and play an essential role in maintenance of the acid-base and water balance in the body. All body cells, especially muscle tissue, require a high content of potassium. A proper balance between sodium, calcium, and potassium in the blood plasma is necessary for proper cardiac function.

Since most foods contain a good supply of potassium, potassium deficiency (hypokalemia) is unlikely to be caused by an unbalanced diet. Possible causes include cushing's syndrome (due to an adrenal gland disorder) and fanconi's syndrome (the result of a congenital kidney defect). The cause could also be an excessive dose of cortisone, prolonged vomiting or diarrhea, or thiazide diuretics, which are administered for treatment of hypertension. Signs of potassium deficiency can include weakness and lethargy, rapid pulse, nausea, diarrhea, and tingling sensations.

If the body absorbs enough potassium but the element is not distributed properly, various disorders may develop. Thus an abnormally low content of potassium in the blood may result in an intermittent temporary paralysis of the muscles, known as familial periodic paralysis.

Potassium deficiency can be treated by administration of potassium supplements. There is a large variety of these preparations. Some are liquids, some are powders to be dissolved in liquids, and some are slow-release tablets that dissolve in the intestine. All can cause gastrointestinal irritation. For many persons on diuretic therapy for hypertension, potassium deficiency can be avoided by increasing their consumption of potassium-containing foods, such as bananas, dates, prunes, and raisins, and potassium supplements are not needed. Potassium supplements are never given to patients receiving potassium-sparing diuretics such as amiloride, spironolactone, or triamterene. If the difficulty lies in the body's use of potassium, treatment is concerned with the primary cause of the deficiency. 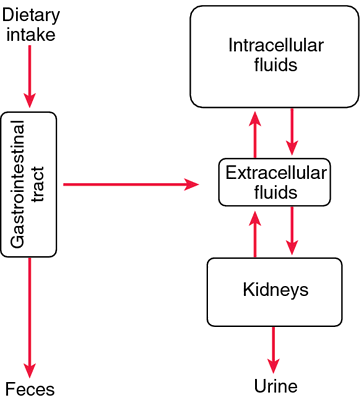 Homeopathy
A homeopathic remedy that has been used for mental and physical exhaustion due to stress, tension or overwork, nervous breakdowns and general fatigue.
Segen's Medical Dictionary. © 2012 Farlex, Inc. All rights reserved.