(den-tish'ŭn),
The natural teeth, as considered collectively, in the dental arch; may be deciduous, permanent, or mixed.
[L. dentitio, teething]

(dĕn-tĭsh′ən)
n.
1. The type, number, and arrangement of a set of teeth.
2. The process of growing new teeth; teething.

(den-tish'ŭn)
The natural teeth, as considered collectively, in the dental arch; may be deciduous, permanent, or mixed.
[L. dentitio, teething] 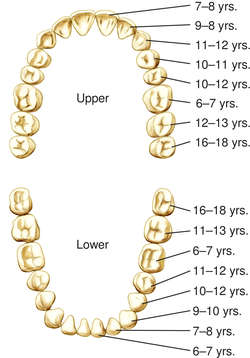 DENTITION
The type, number, and arrangement of teeth in the dental arch. See: illustration; teeth for illus.

Two sets of teeth (i.e., primary and permanent, as in many mammals and humans).

A set of teeth of various shapes that may serve different functions (e.g., incisors, canines, and molars).

A set of both primary and permanent teeth, as in children between 6 and 13 years of age.

A single set of teeth.

The 32 permanent teeth, which begin to erupt at about 6 years of age in people. These are completed by the 16th year with the exception of third molars, which appear between the 18th and 25th years. The incisors are followed by the bicuspids (premolars) and the canines; then the second molars are followed by the third molars. In some individuals the third molars, although present beneath the gingiva, do not erupt. The appearance of the first molars is highly variable, but in some instances they may be the first permanent teeth to appear.
Synonym: dens permanens See: teeth

Several successive sets of teeth developing during a lifetime.

Pertaining to the teeth. The primary dentition consists of 20 teeth, the secondary, or permanent, dentition, usually 32.

the arrangement, type and number of teeth in vertebrates.