(di-fyū'zhŭn),
1. The random movement of molecules or ions or small particles in solution or suspension under the influence of brownian (thermal) motion toward a uniform distribution throughout the available volume; the rate is relatively rapid among liquids and gases, but takes place very slowly among solids.
2. Light scattering.
Farlex Partner Medical Dictionary © Farlex 2012

(di-fyū'zhŭn)
1. The random movement of molecules or ions or small particles in solution or suspension toward a uniform distribution throughout the available volume.
2. Synonym(s): dialysis (1) .
Medical Dictionary for the Health Professions and Nursing © Farlex 2012 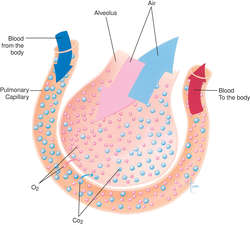 The movement of water into and out of cells, e.g., cells of the central nervous system after a stroke. Decreases in water diffusion are found when brain cells have been deprived of blood and oxygen.
Medical Dictionary, © 2009 Farlex and Partners

the movement of molecules of a particular substance from regions of high concentration to regions of low concentration of that substance, i.e. down a CONCENTRATION GRADIENT. The rate of diffusion in gases is much greater than in liquids, due to differences in their molecular structure. For example, carbon dioxide will diffuse 10,000 times more rapidly in air than in water. diffusion pressure deficit (DPD) see WATER POTENTIAL.
Collins Dictionary of Biology, 3rd ed. © W. G. Hale, V. A. Saunders, J. P. Margham 2005

1. Scattering of light passing through a heterogeneous medium, or being reflected irregularly by a surface, such as a sandblasted opal glass surface. Diffusion by a perfectly diffusing surface occurs in accordance with Lambert's cosine law. In this case, the luminance will be the same, regardless of the viewing direction. 2. The passive movement of ions or molecules through a medium or across a semi-permeable membrane (e.g. the ciliary epithelium) in response to a concentration gradient until equilibrium is reached. It is one of the three mechanisms that create aqueous humour. See diffuse light; diffuse reflection; ultrafiltration.
Millodot: Dictionary of Optometry and Visual Science, 7th edition. © 2009 Butterworth-Heinemann

(di-fyū'zhŭn)
1. The random movement of molecules or ions or small particles in solution or suspension toward a uniform distribution throughout the available volume.
2. Synonym(s): dialysis (1) .
Medical Dictionary for the Dental Professions © Farlex 2012

Feedback
Flashcards & Bookmarks ?
Please log in or register to use Flashcards and Bookmarks. You can also log in with
Flashcards ?
My bookmarks ?
+ Add current page to bookmarks
Mentioned in ?
References in periodicals archive ?
Mesoporous separation layers are commonly in the transient - regime among Knudsen diffusion and molecular diffusion, with large effects on the selectivity (separation factor).
For an equimolar feed, the permeation rate of Knudsen diffusion is inversely proportional to the square root of the molecular weight of the different compounds in the following equation [17]:
Modelling for Gas Transport in Enhanced Polymeric Blend Membrane
The diagnostic value of diffusion weighted imaging in patients with meningioma.
The contribution of diffusion weighted MR imaging to distinguishing typical from atypical meningiomas.
Diagnostic accuracy of diffusion weighted MRI in differentiating benign and malignant meningiomas
one of the filters used for this purpose is called a nonlinear diffusion filter proposed by Perona and Malik in 1990 [4].
Wavelet-Based Adaptive Anisotropic Diffusion Filter
The core argument of these studies is that the adoption of PFP was a private to public policy diffusion that occurred without sufficient assessment of whether it worked well in the private sector (Ingraham, 1993).
UNDERSTANDING THE ADOPTION OF PAY-FOR-PERFORMANCE IN STATE GOVERNMENTS: A DIFFUSION THEORY APPROACH
The b-value set used during diffusion weighted imaging has an impact on the fitting performance of the mono-exponential model and on the diagnostic performance of ADC consequently (16).
Dual-Phase ADC Modelling of Breast Masses in Diffusion-Weighted Imaging: Comparison with Histopathologic Findings
The surface of the Ti-5.04Al/Ti-1.52Mo diffusion couple was then carefully prepared by polishing with several diamond paste of decreasing size followed by a final polishing with a colloidal silica suspension of 0.02 [micro]m.
Experimental Evidence of Precipitation of All 12 Variants in a Single [beta] Grain in Titanium Alloys
Investigation of this diffusion phenomenon seems to be restricted regarding the number of experimental methods.
A New Approach to Determine Gas Diffusion Coefficients in Porous Solids by EIS: Application for N[H.sub.3] and C[O.sub.2] Adsorption on Zirconia and Zeolite Type 5A
where C(x,t) is chloride concentration at depth x and immersion time t, [C.sub.s] is chloride concentration at the surface, x is depth, t is immersion time, and D is chloride diffusion coefficient.
Modeling Chloride Diffusion Coefficient of Steel Fiber Reinforced Concrete under Bending Load
Furthermore, they are very time consuming in resolving the complexity of the diffusion pattern within each HARDI voxel.
White Matter Fiber Tractography Using Nonuniform Rational B-Splines Curve Fitting
Three membrane pore sizes, 0.10, 0.45, and 5.00 [micro]m, were tested on this platform; 80 [micro]L of 1.2% potassium ferricyanide in deionized water was used as the diffusion solution.
A Transdermal Measurement Platform Based on Microfluidics