[di-as´tah-sis]
1. dislocation or separation of two normally attached bones between which there is no true joint. See illustration. 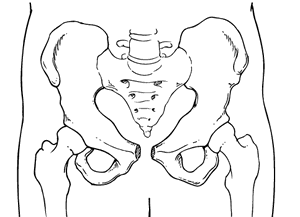 Diastasis of the pubic symphysis. From Dorland's, 2000.
2. an abnormally large separation between associated bones, as between the ribs.
3. the rest period of the cardiac cycle, occurring just before systole. Called also diastasis cordis.
diastasis rec´ti abdo´minis separation of the rectus muscles of the abdominal wall, sometimes occurring during pregnancy.
Miller-Keane Encyclopedia and Dictionary of Medicine, Nursing, and Allied Health, Seventh Edition. © 2003 by Saunders, an imprint of Elsevier, Inc. All rights reserved.