[der″mah-to-fi-bro´mah]
a fibrous tumorlike nodule of the skin, usually on the extremities and especially the legs. Its etiology is not known, but it is most likely a neoplastic disorder. Although it is benign, itching and pain can be a source of severe discomfort.

(der'mă'tō-fī-brō'mă),
A slowly growing benign skin nodule consisting of poorly demarcated cellular fibrous tissue enclosing collapsed capillaries, with scattered hemosiderin-pigmented and lipid macrophages. The following terms are considered by some to be synonymous with, and by others to be varieties of, dermatofibroma: sclerosing hemangioma (2), fibrous histiocytoma, nodular subepidermal fibrosis.
Synonym(s): fibrous histiocytoma, sclerosing hemangioma (2)

A benign tumour composed of primitive mesenchymal cells (macrophages or histiocytes) seen in the skin and soft tissues of the legs of young to middle-aged patients, more commonly women, usually in relation to skeletal muscle.

(dĕr'mă-tō-fī-brō'mă)
A slowly growing benign skin nodule consisting of poorly demarcated cellular fibrous tissue enclosing collapsed capillaries, with scattered hemosiderin-pigmented and lipid macrophages. The following terms are considered by some to be synonymous with, and by others to be varieties of, dermatofibroma: sclerosing hemangioma, fibrous histiocytoma, nodular subepidermal fibrosis. 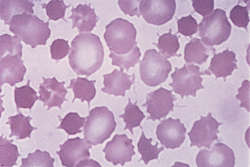 Feedback
Flashcards & Bookmarks ?
Please log in or register to use Flashcards and Bookmarks. You can also log in with
Flashcards ?
My bookmarks ?
+ Add current page to bookmarks
TheFreeDictionary presents:
Write what you mean clearly and correctly.
Mentioned in ?
References in periodicals archive ?
Firstly defined to be "progressive and recurring dermatofibroma" by Darier and Ferrand in 1924, DFSP begins usually as a plaque that slowly grows over several years.
Recurrent Dermatofibrosarcoma Protuberans of the Parotid: A case report and review of literature
Expression of desmin and smooth muscle myosin heavy chain in dermatofibromas. Arch Pathol Lab Med 2002; 126: 1179-83.
Leiomyoma of Oral Cavity: Case Report and Literature Review/Oral Kavitede Leiomyom: Vaka Sunumu ve Literatur Taramasi
Lillemoe, "CD34 and factor XIIIa in the differential diagnosis of dermatofibroma and dermatofibrosarcoma protuberans," American Journal of Dermatopathology, vol.
Factor XIII Subunit A in the Skin: Applications in Diagnosis and Treatment
The granulomas resembled a tumor, composed by spindle-shaped histiocytes, in nodular arrangements in a whorled, storiform pattern that look like a dermatofibroma. AFB are very abundant and the bacilli had elongated morphology.
Histoid leprosy with Type 1 reaction
(12) Recurrent dermatofibroma, hypertrophic scars, keloid, skin manifestations of myofibroblastoma, metaplastic carcinoma, and fibromatosis are the most potential clinical differential diagnoses for DFSP tumors.
Dermatofibrosarcoma protuberans: a rare malignancy of the breast
The other tumors rarely seen were dermatofibroma, atypical fibroxanthoma and Kaposi's sarcoma and actinic Keratosis.
Pattern of skin malignancies in patients presenting to dermatology department Hayatabad Medical Complex Peshawar
Benign diagnoses to consider include pigmented seborrheic keratoses, lentigo, pyogenic granuloma, Kaposi sarcoma, cherry angioma, subungnal traumatic hematoma, dermatofibroma, and nevi (including blue nevi).
An incidental finding: pruritic patches on the patient's trunk and extremities prompted his visit, but it was the "birthmark" on his back that was far more worrisome
(8) In tumors of the skin, CD10 is expressed in dermatofibroma, dermatofibrosarcoma protuberans, and melanoma.
Value of CD10 expression in differentiating cutaneous basal from squamous cell carcinomas and basal cell carcinoma from trichoepithelioma
Dermatofibroma is a common benign mesenchymal tumor composed of fibroblastic and histiocytic cells.
Dermatofibroma on upper extremity in childhood period
Rex skeleton at the American Museum of Natural History in New York to inquire about a dermatofibroma on his leg.
'What's This' Rounds
Cases that resemble dermatofibroma clinically have also been reported.
Pseudomyogenic Hemangioendothelioma
Excisional biopsy and histopathological examination were planned with a diagnosis of dermatofibroma. The patient was informed about the surgical procedure, and his verbal consent was obtained for publishing his case.
Clear Cell Acanthoma in an Unexpected Location