[de-his´ens]
1. a splitting open.
2. wound dehiscence.
dehiscence of uterus rupture of the uterus following cesarean section, especially separation of the uterine scar prior to or during a subsequent labor.
wound dehiscence separation of the layers of a surgical wound; it may be partial or only superficial, or complete with separation of all layers and total disruption. Complete dehiscence of an abdominal wound usually leads to evisceration.
Patient Care. Patients most at risk for wound dehiscence are those who are obese, malnourished, or dehydrated or have abdominal distention, a malignancy, or multiple trauma to the abdomen. Infected wounds are also prone to dehiscence. Those patients who smoke or have a chronic cough are also at risk. Careful monitoring of patients with a predisposition to delayed healing is essential for prevention or mitigation of wound separation, especially between the fifth and twelfth postoperative days, when dehiscence most often occurs. In about half the cases of dehiscence there is a noticeable increase in serosanguineous drainage on the wound dressing before separation of the outer layers becomes apparent. Patients also may report the feeling that something has “given way” in the wound.

If evisceration has not occurred, the wound may be splinted with reinforced dressings, sterile towels, or a binder. This could prevent further separation and allow time to notify the surgeon. The patient should be instructed to lie quietly and, if it is an abdominal wound, to try to avoid increasing intra-abdominal pressure by coughing or straining in any way.

Should splinting an abdominal wound fail to prevent further separation and a spilling of the viscera through the opening, emergency surgery is imperative. Until the patient goes to surgery, the protruding intestines should be covered to prevent drying. Some authorities recommend that only dry sterile towels be used while others prefer covering the entire wound with a sterile towel moistened with povidone-iodine (Betadine). Warming the solution to body temperature can help avoid shock to the intestines, but is not necessary if there is not time to do this. 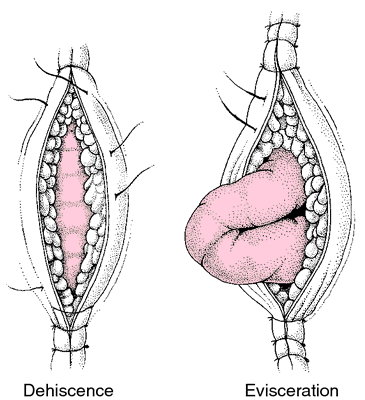 The sutures are unable to keep the wound closed and the edges are no longer approximated. Dehiscence can lead to wound evisceration. From Ignatavicius and Workman, 2002.
Miller-Keane Encyclopedia and Dictionary of Medicine, Nursing, and Allied Health, Seventh Edition. © 2003 by Saunders, an imprint of Elsevier, Inc. All rights reserved.

(dĭ-hĭs′əns)
n.
1. Botany The spontaneous opening at maturity of a plant structure, such as a fruit, anther, or sporangium, to release its contents.
2. Medicine A rupture or splitting open, as of a surgical wound, or of an organ or structure to discharge its contents.
de·his′cent adj.
The American Heritage® Medical Dictionary Copyright © 2007, 2004 by Houghton Mifflin Company. Published by Houghton Mifflin Company. All rights reserved.

Surgery The pulling apart of apposed or sutured margins
McGraw-Hill Concise Dictionary of Modern Medicine. © 2002 by The McGraw-Hill Companies, Inc.

(dē-his'ĕns)
A bursting open, splitting, or gaping along natural or sutured lines.
[L. dehisco, to split apart or open]
Medical Dictionary for the Health Professions and Nursing © Farlex 2012

Splitting open or separating. Often used of an operation wound which has failed to heal normally and which breaks down under internal pressure.
Collins Dictionary of Medicine © Robert M. Youngson 2004, 2005

(dē-his'ĕns)
A bursting open, splitting, or gaping along natural or sutured lines.
[L. dehisco, to split apart or open]
Medical Dictionary for the Dental Professions © Farlex 2012