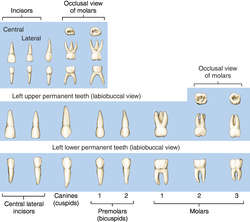 Any of the 20 teeth that make up the primary dentition, which are shed and replaced by the permanent teeth.
Synonym: baby tooth; milk tooth; primary tooth See: illustration
See also: tooth
Medical Dictionary, © 2009 Farlex and Partners