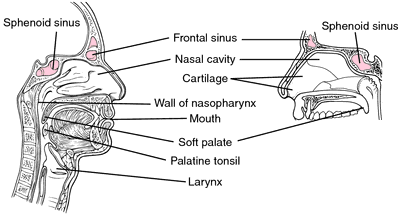 (nōz),
Specialized organ at the entrance of the respiratory system that conducts, warms, humidifies, and cleans the inspired air and houses the olfactory neuroeithelium; includes both the external nose and the nasal cavities.
Synonym(s): nasus (2)
[A.S. nosu]
Farlex Partner Medical Dictionary © Farlex 2012

(nōz)
n.
The part of the human face or the forward part of the head of other vertebrates that contains the nostrils and organs of smell and forms the beginning of the respiratory tract.
The American Heritage® Medical Dictionary Copyright © 2007, 2004 by Houghton Mifflin Company. Published by Houghton Mifflin Company. All rights reserved.
Anatomy The double-barrelled structure at the center of the face, which is a conduit of air
Drug slang A regionally popular street term for cocaine
Vox populi A popular term for a distinct talent for detecting something
Segen's Medical Dictionary. © 2012 Farlex, Inc. All rights reserved.

(nōz)
That portion of the respiratory pathway above the hard palate; includes both the external nose and the nasal cavity.
Synonym(s): nasus (2) .
[A.S. nosu]
Medical Dictionary for the Health Professions and Nursing © Farlex 2012

A term used both for the externally visible part and for the internal nasal air passages. The nose is the normal entry route for inspired air, which is warmed, moistened and cleaned. Chemical particles in the air stimulate the nerve endings of the olfactory nerves in the roof of the nasal cavity, giving rise to the sensation of smell.
Collins Dictionary of Medicine © Robert M. Youngson 2004, 2005

the projecting part of the head of higher vertebrates that usually carries the nostrils and is associated with the sense of smell.
Collins Dictionary of Biology, 3rd ed. © W. G. Hale, V. A. Saunders, J. P. Margham 2005

Q. Regarding Seasonal Nasal allergy. My father is suffering from seasonal nasal allergies. He took a 24-hour loratadine pill, 5 hours ago. His nose is still running just like it was. Can I take a benedryl, or is it dangerous to mix loratadine and benedryl? What else can I do to stop my nose?

A. except well known drug interactions- most Dr. check it out with a computer program they have. you need to ask a Dr. or a pharmacist about it. but i can tell you that if you wait 4 times the T1/2 - that is enough to consider the drug out of the system.

A. Seasonal changes tend to cause a lot of allergic reactions, and that is a known fact with no known mechanism. It is thought that perhaps the more atopic (bound to have allergies) people are, and with an atopic family histroy, they will develope more allergies during seasonal changes. One theory is that the environmental allergens, such as flower seeds or particles, tend to be in a higher shift and so they are more "in the air". Others believe it has to do with viral infections.

Q. When you get sick (runny nose, cold, cough) do you still workout?

A. Hmm, depending on how sick I am, I will usually just workout anyway. I feel it mentally helps me.
More discussions about nose
This content is provided by iMedix and is subject to iMedix Terms. The Questions and Answers are not endorsed or recommended and are made available by patients, not doctors.