[skin]
the outer covering of the body. The skin is the largest organ of the body, and it performs a number of vital functions. It serves as a protective barrier against microorganisms. It helps shield the delicate, sensitive tissues underneath from mechanical and other injuries. It acts as an insulator against heat and cold, and helps eliminate body wastes in the form of perspiration. It guards against excessive exposure to the ultraviolet rays of the sun by producing a protective pigmentation, and it helps produce the body's supply of vitamin D. Its sense receptors enable the body to feel pain, cold, heat, touch, and pressure. The skin consists of two main parts: an outer layer, the epidermis, and an inner layer, the corium (or dermis).

Epidermis. The epidermis is thinner than the corium, and is made up of several layers of different kinds of cells. The number of cells varies in different parts of the body; the greatest number is in the palms of the hands and soles of the feet, where the skin is thickest.

The sweat glands are situated deep in the corium. They collect fluid containing water, salt, and waste products from the blood and carry it away in canals that end in pores on the skin surface, where it is deposited as sweat. Perspiration helps regulate body temperature as well, because cooling of the skin occurs when sweat evaporates. The sebaceous glands are also in the corium. They secrete the oil that keeps the skin surface lubricated.

Beneath the corium is a layer of subcutaneous tissue. This tissue helps insulate the body against heat and cold, and cushions it against shock.

The hair and nails are outgrowths of the skin. The roots of the hair lie in follicles, or pockets of epidermal cells situated in the corium. Hair grows from the roots, but the hair cells die while still in the follicles, and the closely packed remains that are pushed upward form the hair shaft that is seen on the surface of the skin.

The nails grow in much the same way as the hair. The nail bed, like the hair root, is situated in the corium. The pink color of the nails is due to their translucent quality which allows the blood capillaries of the corium to show through. 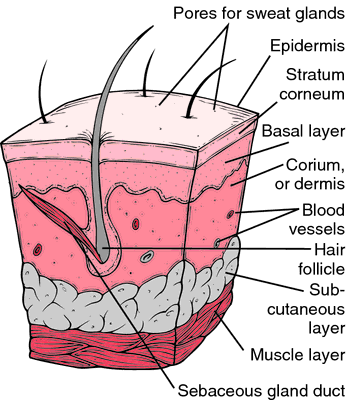 Normal skin. From Frazier et al., 2000.
skin test application of a substance to the skin, or intradermal injection of a substance, to permit observation of the body's reaction to it. Such a test detects a person's sensitivity to such allergens as dust and pollen, or to preparations of microorganisms believed to be the cause of a disorder.

There are several types of skin tests, including the patch test, the scratch test, and the intradermal test.
Patch Test. This is the simplest type of skin test. A small piece of gauze or filter paper is impregnated with a minute quantity of the substance to be tested and is applied to the skin, usually on the forearm. After a certain length of time the patch is removed and the reaction observed. If there is no reaction, the test result is said to be negative; if the skin is reddened or swollen, the result is positive.

The patch test is used most often in testing for skin allergies, especially contact dermatitis.
Scratch Test. In this test, one or more small scratches or superficial cuts are made in the skin, and a minute amount of the substance to be tested is inserted in the scratches and allowed to remain there for a short time. If no reaction has occurred after 30 minutes, the substance is removed and the test is considered negative. If there is redness or swelling at the scratch sites, the test is considered positive.

The scratch test is often used in testing for allergies. A complete screening for allergic sensitivity may require numerous skin tests. Only an extremely minute quantity of the substance can be used in each test since severe allergic reactions can occur.

The scratch test is also used in the diagnosis of tuberculosis. In Pirquet's reaction, for example, tuberculin is used, and the local inflammatory reaction that results is more marked in tuberculous persons than in normal ones.
Intradermal Tests. In these tests, the substance under study is injected between the layers of skin. Intradermal tests are used for diagnosis of infectious diseases and determination of susceptibility to a disease or sensitivity to an allergen.

In the intradermal test for tuberculosis, the Mantoux test, a purified protein derivative (PPD), prepared from tubercle bacilli, is injected. In a positive result, the area becomes reddened or inflamed within 72 hours. This indicates past or present infection with or exposure to the tubercle bacillus. An infection that has been present for at least 2 to 8 weeks will usually be revealed by the test.

The Schick test is used to determine susceptibility to diphtheria. A very small dose of diphtheria antitoxin is injected into the forearm. In a positive reaction the area becomes red and remains so for about a week. If no reaction occurs, the person is immune to the disease.

The trichophytin test is sometimes used in diagnosing suspected cases of superficial fungus infection of the skin, such as ringworm. In the presence of infection by the fungus Trichophyton, an injection of trichophytin, which is prepared from cultures of the fungus, will produce a reaction similar to the tuberculin reaction. Skin tests, of course, are always made in an area separate from the infected area.

In addition to their frequent use in testing for allergies, intradermal tests are employed in the diagnosis of parasitic infections, such as schistosomiasis, other fungus diseases besides trichophytosis, and mumps.
Miller-Keane Encyclopedia and Dictionary of Medicine, Nursing, and Allied Health, Seventh Edition. © 2003 by Saunders, an imprint of Elsevier, Inc. All rights reserved.

a method for determining induced sensitivity (allergy) by applying an antigen (allergen) to, or inoculating it into, the skin; induced sensitivity (allergy) to the specific antigen is indicated by an inflammatory reaction of one of two general kinds: 1) immediate, appears in minutes and is dependent on circulating immunoglobulins (antibodies); 2) delayed, appears in 12-48 hours and is not dependent on these soluble substances but on cellular response and infiltration.
Synonym(s): cutaneous test, intradermal test, skin reaction
Farlex Partner Medical Dictionary © Farlex 2012

A test of an allergic response to a substance by placing it on (patch test) or just barely under (prick test) the skin.
Segen's Medical Dictionary. © 2012 Farlex, Inc. All rights reserved.

Immunology A test of immune response to a substance by placing it on or under the skin. See PPD, Prick test.
McGraw-Hill Concise Dictionary of Modern Medicine. © 2002 by The McGraw-Hill Companies, Inc.

(skin test)
A method for determining induced sensitivity (allergy) by applying an antigen (allergen) to, or inoculating it into, the skin; induced sensitivity (allergy) to the specific antigen is indicated by an inflammatory reaction of one of two general kinds: 1) immediate, appears in minutes to an hour or so and in general is dependent on circulating immunoglobulins (antibodies); 2) delayed, appears in 12-48 hours and is not dependent on these soluble substances but on cellular response and infiltration.
Synonym(s): intradermal test.
Medical Dictionary for the Health Professions and Nursing © Farlex 2012