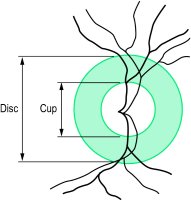 Fig. R1 Diagram of the physiological cup with a cup-disc ratio of 0
Millodot: Dictionary of Optometry and Visual Science, 7th edition. © 2009 Butterworth-Heinemann

Feedback
Flashcards & Bookmarks ?
Please log in or register to use Flashcards and Bookmarks. You can also log in with
Flashcards ?
My bookmarks ?
+ Add current page to bookmarks
Mentioned in ?
References in periodicals archive ?
The cup-disc ratio of the cases was 66.0 [+ or -] 16.98 which is supported by earlier study [10].
Visual Evoked Potentials in Primary Open Angle Glaucoma
(13) Describe an abnormal optic disc in terms of its cup-disc ratio, and report visual loss to the ophthalmologist as a defect in a respective field quadrant as detected on confrontational visual field testing or as an afferent pupillary defect in a given eye.
Open-angle glaucoma: tips for earlier detection and treatment selection
Armaly, "Cup-disc ratio in early open-angle glaucoma," Documenta Ophthalmologica Advances in Ophthalmology, vol.
Analysis of Peripapillary Retinal Vessel Diameter in Unilateral Normal-Tension Glaucoma
Direct ophthalmoscopy is warranted to determine if the patient has an elevated cup-disc ratio (>0.6).
Using the likelihood ratio