[kruch´ez]
artificial supports, made of wood or metal, used by those who need aid in walking because of injury, disease, or birth defect.
Types. Crutches are made in different sizes suitable for persons of various heights. Most are made of wood or tubular aluminum. The standard type is the tall crutch that fits under the armpit with double uprights and a small horizontal hand bar between them. The lower part may be adjustable to allow for extensions. There always should be a rubber tip at the base, preferably a suction tip, to prevent slipping.

Gaining in popularity is the Lofstrand crutch, which consists of a single tube of aluminum surmounted by a metal cuff that fits around the forearm. The user supports his weight on a handbar. He can release his hold on the handbar, as in grasping a handrail to climb stairs, without dropping the crutch. A variation of the Lofstrand crutch is the Canadian elbow extensor crutch, which goes farther up the arm.

In walking with crutches, the means of locomotion is transferred from the legs to the arms. The muscles of the arms, shoulders, back, and chest work together to manipulate the crutches. The kind of crutches used depends largely on the nature of the disability. In some cases, the legs may be partially able to function and bear some of the body's weight, so that there is less dependence on the crutches. In other cases, leg braces may be needed to supplement the crutches.
Gaits. The user is taught one of several standard methods or gaits, depending on the underlying condition. Eventually he or she should be able to master at least two gaits: a fast one for making speed in the open, and a slow one for crowded places, where the primary need is to maintain balance. A variety of gaits also helps to relieve fatigue because one set of muscles can rest while another works.

In describing a gait each foot and crutch is called a point, so that a two-point gait, for example, means that two points of the total of four are in contact with the ground during the performance of one step. A three-point gait may be used when one leg is stronger than the other, meaning that two crutches and the weaker leg hit the ground simultaneously while the next step is made by the stronger leg alone. There is also the so-called tripod gait, swinging gait, and variations of them. 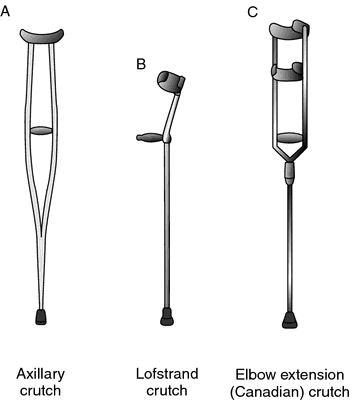 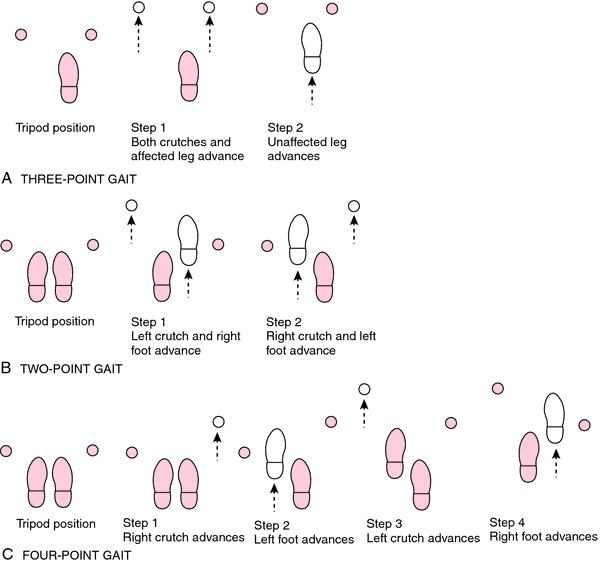 Crutch-walking gaits. Note that all gaits begin from the tripod position.
( and see also gait analysis.)
Miller-Keane Encyclopedia and Dictionary of Medicine, Nursing, and Allied Health, Seventh Edition. © 2003 by Saunders, an imprint of Elsevier, Inc. All rights reserved.

Feedback
Flashcards & Bookmarks ?
Please log in or register to use Flashcards and Bookmarks. You can also log in with
Flashcards ?
My bookmarks ?
+ Add current page to bookmarks
Mentioned in ?
References in periodicals archive ?
Following the training, 17 wheelchairs and 3 crutches were donated to beneficiaries who participated.
The Church of Jesus Christ of Latter-Day Saints to donate 600 wheelchairs
"When he pleaded to be allowed to stay for the night, the guard stripped him of his sleeping bag, gathered up his brace, crutches and belongings and threw them in the residential bins and promptly locked the bin store, so the homeless man could not retrieve the items."
Probe into claim homeless man's sleeping bag was locked in a bin
Months of achievements came flooding into my mind: advancements in language, social skills, reading, writing, and yes, even hints here and there that we were far from the end of his journey with the cursed crutches. Like the innkeeper in Nazareth, I had decided what this inconvenient thing in the corner was, dressed it up to fit my assumptions, and went on with life.
What a Middle-Eastern tree taught me about my disabled son
"Within a year of injuring her hip she was on crutches and then she would use a wheelchair and a mobility scooter.
Teen's back on her feet thanks to Adam
He claimed: "The chap with the crutches and another bloke, who had been substituted, kicked off on one of our players.
Welsh rugby match abandoned amid fighting on and off the pitch; The game was called off after 55 minutes
Victoria ditched the crutches as she landed at JFK to see eldest son Brooklyn for his 19th birthday today.
Posh's injury heels fast
During a second Lourdes visit, fumbling to find cash for a postcard, he put the crutches down without thinking, handed over the money...AND UNAIDED WALKED BACKTO HIS WHEELCHAIR.
Award for miracle man; TROPHY TIME
It is also usable with both canes and crutches (even pediatric crutches).
ERGOCAP ULTRALITE UNIVERSAL CANE AND CRUTCH TIP
WITH reference to Tom Belger's article (ECHO, 15 January) regarding medical equipment on loan to patients i.e crutches, wheelchairs, etc not being returned, and also Paddy Shennan's column on Wednesday which said how selfish people are because all these things including missed appointments cost our treasured NHS dearly.
Waste of equipment
What's a serious injury and a pair of crutches when your team scores an FA Cup equaliser at Anfield?
Everton fan on crutches celebrates Gylfi Sigurdsson goal at Anfield; Evertonian doesn't let injury stop him celebrating an equaliser at Anfield
The literature suggests that crutches are currently manufactured and fitted on a case-by-case basis (Moss, 1982; Lapid, 2000; Kumar, 2010).
A Modular and Adjustable Ptosis Crutch as a Non-Surgical, Low Cost Solution for Elevating the Upper Eyelid in Myasthenia Gravis