[kōt]
1. a membrane or other structure covering or lining a part or organ; in anatomic nomenclature called tunica.
2. the layer or layers of protective protein surrounding the nucleic acid in a virus. See also capsid.
buffy coat the thin yellowish layer of leukocytes overlying the packed erythrocytes in centrifuged blood.

the upper, lighter portion of the blood clot (coagulated plasma and white blood cells), occurring when coagulation is delayed so that the red blood cells have had time to settle; the portion of centrifuged, anticoagulated blood that contains leukocytes and platelets.
Synonym(s): crusta inflammatoria, crusta phlogistica, leukocyte cream

The flavescent (yellow-white) band of cells and debris present between the upper layer of plasma and the lower layer of RBCs when whole blood is spun at 5000 RPM, which corresponds to WBCs.

Lab medicine The flavescent yellow-white band of cells and debris present between the upper layer of plasma and the lower layer of RBCs, when whole blood is spun at 5000 RPM, which corresponds to WBCs

(bŭf'ē kōt)
The light-colored layer of blood that is seen when anticoagulated blood is centrifuged or allowed to stand. It appears as a layer between the plasma and eythrocytes and is composed of leukocytes and platelets. 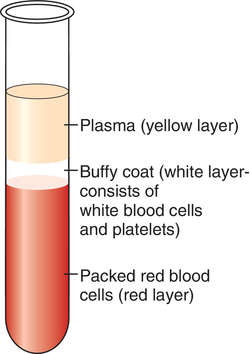 BUFFY COAT
A light stratum of blood seen when the blood is centrifuged or allowed to stand in a test tube. The red blood cells settle to the bottom and, between the plasma and the red blood cells, a light-colored layer contains mostly white blood cells. Platelets are at the top of this coat; the next layers, in order, are lymphocytes and monocytes; granulocytes; and reticulocytes. In normal blood, the buffy coat is barely visible; in leukemia and leukemoid reactions, it is much larger. See: illustration

The creamy layer of white blood cells that forms between the PLASMA and the column of packed red cells when anticoagulated blood is centrifuged. Practical use is made of this layering in the production of buffy coat-poor red cell transfusion fluids in cases in which it is considered that the risk of post-operative infection from the immunosuppressive effect of white cells in transfused blood is excessive.

The thin layer of concentrated white blood cells that forms when a tube of blood is spun in a centrifuge.
Mentioned in: Leukemia Stains