the lateral one of a pair of small oval masses related to visual function that protrude slightly from the posteroinferior aspect of the thalamus; commonly considered as part of the metathalamus.
Synonym(s): corpus geniculatum laterale [TA], corpus geniculatum externum
Farlex Partner Medical Dictionary © Farlex 2012

(lat'ĕr-ăl jĕ-nik'yū-lăt bod'ē)
The more lateral of a pair of small oval masses that protrude slightly from the posteroinferior aspects of the thalamus; its main (dorsal) subdivision serves as a processing station in the major pathway from the retina to the cerebral cortex, receiving fibers from the optic tract and giving rise to the geniculocalcarine radiation to the visual cortex in the occipital lobe.
Synonym(s): corpus geniculatum laterale [TA] .
Medical Dictionary for the Health Professions and Nursing © Farlex 2012

Ovoid protuberances lateral to the pulvinar of the thalamus in the diencephalon of the forebrain and into which the fibres of the optic tract synapse on their way to the visual cortex. However, because of the semidecussation of the optic nerve fibres in the optic chiasma, the lateral geniculate body in the right thalamus receives the fibres originating on the temporal retina of the right eye and the nasal fibres of the left. Each body appears, in cross-section, to consist of alternating white and grey areas. The white areas are formed by the medullated nerve fibres of the optic tract, while the grey areas consist largely of the nerve cells in which the fibres of the optic tract terminate (synapses) and from which arises the fibres of the optic radiations. There are six grey areas or layers of cells, with layer 1 being the most ventral and layer 6 the most dorsal (or posterior). Layers 1, 4 and 6 receive the crossed or nasal fibres from the contralateral retina, while layers 2, 3 and 5 receive the uncrossed or temporal fibres of the ipsilateral retina. The neural components of the LGB without the blood vessels and covering layer form the lateral geniculate nucleus (LGN).There are two main types of cells in the LGN: in layers 1 and 2 (those most ventral) the cells are substantially larger than in the other four layers and are called magno cells and the layers, magnocellular layers. The main input to these cells are the retinal rods and the magno ganglion cells. In the other four layers (those most dorsal) the cells are smaller and are called parvo cells and the layers, parvocellular layers. The main input to these cells are the retinal cones and the parvo ganglion cells. The cells of the parvocellular layers seem to be mainly responsible for transmitting information about visual acuity, form vision, colour perception and low contrast targets. The cells in the magnocellular layers seem to be mainly responsible for transmitting information about motion and flicker perception, stereopsis and high contrast targets. The magnocellular and parvocellular cells project to different cells in the primary visual cortex (V1), where they retain the same segregation as in the lateral geniculate bodies. The receptive fields of the cells in the LGN are circular with either an 'on' or 'off' centre with the opposite behaviour in the surround, but they are more sensitive to contrast than the retinal ganglion cells (Fig. G1). See brachium; M cell; P cell; visual fibres; visual pathway. 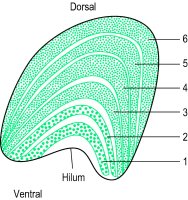