[roo-bel´ah]
a mild systemic disease caused by a virus and characterized by a fever and a transient rash. It is not as contagious as chickenpox or measles, but there are frequent epidemics among schoolchildren, usually during the spring and early summer. The virus is spread by direct contact and by droplet infection. Rubella begins with a slight cold, fever, and sore throat. The lymph nodes behind the ears and at the back of the neck may swell, causing soreness or pain when the head is moved. The rash appears first on the face and scalp, and spreads to the body and arms the same day; it is similar to the rash of measles, although the spots usually do not run together. It fades after 2 or 3 days, although in a few cases the disease may last as long as a week. Called also German measles and three-day measles

If a pregnant woman contracts rubella, especially during the first trimester, the virus can damage the developing offspring. The location and extent of the resulting congenital anomaly are determined in large part by the developmental stage of the embryo at the time of the attack. Congenital heart defects, cataracts, mental retardation, and deafness are some of the more common defects resulting from maternal rubella.
Treatment and Prevention. Except for complications that may result if the disease is contracted during pregnancy, other complications are rare. No special treatment, medicine, or diet is necessary unless the patient has a high fever. One attack usually gives lifetime immunity to the disease, although a second attack does occasionally occur. The Centers for Disease Control and Prevention recommends two doses of rubella vaccine for all children, given as combination measles-mumps-rubella vaccine, with doses at least four weeks apart. The first dose should be given when the child is 12 months old. Vaccine is also recommended for susceptible nonpregnant adolescents and adults who do not have rubella immunity. 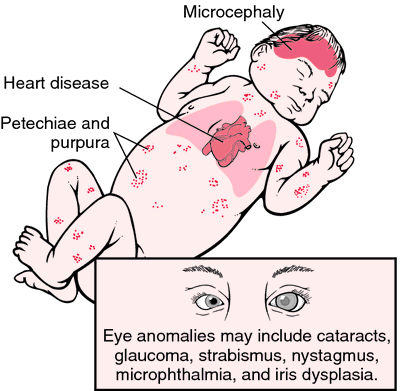 Congenital rubella syndrome is marked by a triad that includes microcephaly, microphthalmia, and congenital heart disease. From Damjanov, 2000.
congenital rubella syndrome (rubella syndrome) transplacental infection of the fetus with rubella usually in the first trimester of pregnancy, as a consequence of maternal infection (which may or may not be clinically apparent), resulting in various developmental abnormalities in the newborn infant. They include cardiac and ocular lesions, deafness, microcephaly, mental retardation, and generalized growth retardation, which may be associated with acute self-limited conditions such as thrombocytopenic purpura, anemia, hepatitis, encephalitis, and radiolucencies of long bones. Infected infants may shed the virus to all contacts for extended periods of time.
Miller-Keane Encyclopedia and Dictionary of Medicine, Nursing, and Allied Health, Seventh Edition. © 2003 by Saunders, an imprint of Elsevier, Inc. All rights reserved.

fetal infection with rubella virus during the first trimester of pregnancy resulting in a series of congenital abnormalities including heart disease, deafness, and blindness.
Farlex Partner Medical Dictionary © Farlex 2012