[kol″o-bo´mah] (pl. colobomas, colobo´mata) (L.)
1. a defect of tissue.
2. particularly, a defect of some ocular tissue, usually due to failure of part of the fetal fissure to close; it may affect the choroid, ciliary body, eyelid (palpebral coloboma, colobo´ma palpebra´le), iris (colobo´ma i´ridis), lens (colobo´ma len´tis), optic nerve, or retina (colobo´ma re´tinae). A scotoma is usually present, corresponding to the area of the coloboma. 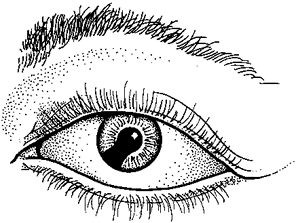 Coloboma of the iris. From Dorland's, 2000.
Miller-Keane Encyclopedia and Dictionary of Medicine, Nursing, and Allied Health, Seventh Edition. © 2003 by Saunders, an imprint of Elsevier, Inc. All rights reserved.

(kol-ō-bō'mă),
Any defect, congenital, pathologic, or artificial, especially of the eye due to incomplete closure of the retinal fissure.
[G. kolobōma, lit., the part taken away in mutilation, fr. koloboō, to dock, mutilate]
Farlex Partner Medical Dictionary © Farlex 2012

(kol'ō-bō'mă)
Any defect, congenital, pathologic, or artificial, especially of the eye due to incomplete closure of the optic fissure.
[G. kolobōma, lit., the part taken away in mutilation, fr. koloboō, to dock, mutilate]
Medical Dictionary for the Health Professions and Nursing © Farlex 2012

A congenital gap in a part, especially in the IRIS or CHOROID of the eye or in an eyelid.
Collins Dictionary of Medicine © Robert M. Youngson 2004, 2005

Q. My grandson 5mths has been dignosed with Coloboma HAs anyone had any experiences with this. He will be seen at Toronto Hospital for Sick Kids

A. Don't have it or a child with it, so I can't add from my own experience. However, here are several places in which you can find more information about this:

http://en.wikipedia.org/wiki/Coloboma
http://www.nlm.nih.gov/medlineplus/ency/article/003318.htm
More discussions about coloboma
This content is provided by iMedix and is subject to iMedix Terms. The Questions and Answers are not endorsed or recommended and are made available by patients, not doctors.

Feedback
Flashcards & Bookmarks ?
Please log in or register to use Flashcards and Bookmarks. You can also log in with
Flashcards ?
My bookmarks ?
+ Add current page to bookmarks
Mentioned in ?
References in periodicals archive ?
The major criteria of CHARGE syndrome include coloboma, choanal atresia, and/or characteristic ear anomalies (Chen, 2017).
Nursing Care of Infants and Children With Congenital Heart Disease and Associated Genetic Conditions
Adorable Lilien Molnar was born blind and was diagnosed with two severe eye conditions known as microphalamia and coloboma at just five days old
Baby 'born with eyes of CAT' is UK's youngest to be diagnosed with condition; Lilien Molnar, from Hemel Hempstead, in Hertfordshire, was diagnosed with microphalamia and coloboma when she was less than a week old
Ocular coloboma can cause a distinctive keyhole-shaped pupil as it commonly results in a missing segment in the iris, the coloured part of the eye.
Gene causing childhood sight loss identified
Zika/associated birth defects include selected congenital brain anomalies (intracranial calcifications; cerebral atrophy; abnormal cortical formation; corpus callosum abnormalities; cerebellar abnormalities; porencephaly; hydranencephaly; ventriculomegaly/hydrocephaly); selected congenital eye anomalies (microphthalmia or anophthalmia; coloboma; cataract; intraocular calcifications; chorioretinal anomalies involving the macula, excluding retinopathy of prematurity; and optic nerve atrophy, pallor, and other optic nerve abnormalities); and/or microcephaly at birth (birth head circumference <3rd percentile for infant sex and gestational age based on INTERGROWTH/21st online percentile calculator [http://intergrowth21.ndog.ox.ac.uk/]).
Vital Signs: Zika-Associated Birth Defects and Neurodevelopmental Abnormalities Possibly Associated with Congenital Zika Virus Infection--U.S. Territories and Freely Associated States, 2018
Magnetic resonance imaging (MRI) of the inner ear with three-dimensional (3D) reconstruction revealed a defect in the LSCC, which was characterized by complete coloboma and interruption of the LSCC in proximity to the posterior SCC.
Isolated Unilateral Horizontal Semicircular Canal Malformation
This condition is classified as simple, when presented as an isolated finding, or complex, when accompanied by other malformations such as colobomas, anterior segment dysgenesis, lens abnormalities, and posterior segment anomalies [1].
Nanophthalmos: A Review of the Clinical Spectrum and Genetics
Major criteria Minor criteria More than two basal cell Congenital skeletal anomaly: carcinomas, or BCCs; one BCC at bifid, fused, splayed or missing younger than 30 years of age; or rib or bifid, wedged or fused more than 10 basal cell nevi vertebra Any odontogenic keratocyst Occipital-frontal circumference, (proven on histology) or more than 97 percentile, with polyostotic bone cyst frontal bossing Three or more palmar or plantar Cardiac or ovarian fibroma pits Ectopic calcification: lamellar Medulloblastoma or early-at younger than 20 years Lymphomesenteric cysts of age-falx calcification Positive family history of nevoid Congenital malformation such as basal-cell carcinoma syndrome cleft lip or palate, polydactylism, or eye anomaly (cataract, coloboma, microphthalmos)
Multiple, Multiloculated, and Recurrent Keratocysts of the Mandible and Maxilla in Association with Gorlin-Goltz (Nevoid Basal-Cell Carcinoma) Syndrome: A Pediatric Case Report and Follow-up over 5 Years
At age 5, she was assessed by an ophthalmologist and diagnosed with bilateral chorioretinal coloboma, left iris coloboma, left cataract, left sensory exotropia, and left microphthalmos.
Ocular Manifestations of a Novel Proximal 19p13.3 Microdeletion
A birth record showed the following signs or conditions: birth weight 2,350 g (<3rd centile), length 45 cm (<3rd centile), iris coloboma at the left eye, and retrognathia.
Characterization of a Small Supernumerary Marker Chromosome Derived from Xq28 and 14q11.2 Detected Prenatally
Apart from this, people with the syndrome often have eyes that "slant downward, sparse eyelashes, and a notch in the lower eyelids called an eyelid coloboma."&nbsp;In many cases, an additional abnormality or abnormalities could also cause the person to lose their vision.
Boy Suffering From Rare Syndrome Wants His Two Ears For Christmas
If such features are present, particularly deafness, anomalous ears, coloboma and/or hypoplasia or aplasia of the semicircular canals, CHD7 should be tested (44).
Update on the Genetics of Idiopathic Hypogonadotropic Hypogonadism
Lobuloplasty was applied in eight patients (61.5%) for partial lobule cleft, in four patients (30.7%) for elongated lobule, and in one patient (7.8%) for coloboma lobuli (congenital lobule cleft).
Auricular Lobuloplasty