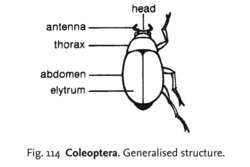 an order of insects, including beetles and weevils. The forewing is thick, leathery and veinless, and is called an elytrum. When closed, elytra meet along the midline and protect the membranous hindwings, which fold forward. Some of the approximately 280 000 species of Coleoptera are wingless, however. There is a complete METAMORPHOSIS.
Collins Dictionary of Biology, 3rd ed. © W. G. Hale, V. A. Saunders, J. P. Margham 2005