[res″pĭ-ra´shun]
1. the exchange of oxygen and carbon dioxide between the atmosphere and the body cells, including inhalation and exhalation, diffusion of oxygen from the pulmonary alveoli to the blood and of carbon dioxide from the blood to the alveoli, followed by the transport of oxygen to and carbon dioxide from the body cells. See also ventilation (def. 2) and see Plates.
2. the metabolic processes by which living cells break down carbohydrates, amino acids, and fats to produce energy in the form of adenosine triphosphate (ATP); called also cell respiration.
The Respiratory Sequence. The sequence of the respiration process begins as air enters the corridors of the nose or mouth, where it is warmed and moistened. The air then passes through the pharynx, larynx, and trachea and into the bronchi.

The bronchi branch in the lungs into smaller and smaller bronchioles, ending in clusters of tiny air sacs called alveoli; there are 750 million alveoli in the lungs. The blood flows through the lungs in the pulmonary circulation. Through the thin membrane of the network of capillaries around the alveoli, the air and the blood exchange oxygen and carbon dioxide. The carbon dioxide molecules migrate from the erythrocytes in the capillaries through the porous membrane into the air in the alveoli, while the oxygen molecules cross from the air into the red blood cells.

The erythrocytes proceed through the circulatory system, carrying the oxygen in loose combination with hemoglobin and giving it up to the body cells that need it. In cellular respiration the blood cells release oxygen and pick up carbon dioxide. The lungs dispose of the carbon dioxide, left there by the red blood cells, in the process of breathing. With each breath, about one-sixth of the air in the lungs is exchanged for new air.
Breathing. The lungs inflate and deflate 16 to 20 times per minute in adults, 12 to 20 per minute in teenagers, 20 to 30 per minute in children 2 to 12 years old, and 30 to 50 per minute in newborns. Their elastic tissue allows them to expand and contract like a bellows worked by the diaphragm and the intercostal muscles. The diaphragm contracts, flattening itself downward, and thus enlarges the thoracic cavity. At the same time the ribs are pulled up and outward by the action of the narrow but powerful intercostal muscles that expand and contract the rib cage. As the chest expands, the air flows in. Exhalation occurs when the respiratory muscles relax and the chest returns automatically to its minimum size, expelling the air (see also lung).
Automatic Breathing Controls. The automatic control of breathing stems from poorly defined areas known as the respiratory centers, located in the medulla oblongata and pons. From there, impulses are sent down the spinal cord to the nerves that control the diaphragm, and to the intercostal muscles. Chemical and reflex signals control these nerve centers. (See hering-breuer reflexes.)

The carbon dioxide tension (Pco2), of arterial blood normally is 35 to 45 mm Hg. When the Pco2 increases, the respiratory centers are stimulated and breathing becomes more rapid; conversely, decrease of the Pco2 slows the rate of respiration. The Pco2 acts both directly on the respiratory centers and on the carotid and aortic bodies, chemoreceptors that are responsive to changes in blood Pco2, Po2, and pH (see also blood gas analysis).
Protective Respiratory Mechanisms. The lungs are constantly exposed to the surrounding atmosphere. Twenty times a minute, more or less, they take in a gaseous mixture, along with whatever foreign particles happen to be suspended in it and at whatever temperature it may be. To compensate, the lungs have some remarkable protective devices.

On its way through the nasal passage, the cold air from outside is preheated by a large supply of blood, which gives off warmth through the thin mucous membrane that lines the respiratory tract. This same mucous lining is always moist, and dry air picks up moisture as it passes.

Dust, soot, and bacteria are filtered out by a barrier of cilia, tiny hairlike processes that line the passageways of the respiratory tract. The cilia trap not only foreign particles but also mucus produced by the respiratory passages themselves. Since the movement of the cilia is always toward the outside, they move the interfering matter upward, away from the delicate lung tissues, so that it can be expectorated or swallowed. Particles that are too large for the cilia to dispose of usually stimulate a sneeze or a cough, which forcibly expels them. Sneezing and coughing are reflex acts in response to stimulation of nerve endings in the respiratory passages. The stimulus for a cough comes from the air passages in the throat; for a sneeze, from those in the nose.
abdominal respiration inspiration accomplished mainly by the diaphragm.
aerobic respiration oxidative transformation of certain substrates into high-energy chemical compounds; see also adenosine triphosphate.
artificial respiration see artificial respiration.
Biot's respiration breathing characterized by irregular periods of apnea alternating with periods in which four or five breaths of identical depth are taken; seen in patients with increased intracranial pressure associated with spinal meningitis and other central nervous system disorders.
cell respiration respiration (def. 2).
Cheyne-Stokes respiration see cheyne-stokes respiration.
cogwheel respiration breathing with jerky inhalation.
diaphragmatic respiration that performed mainly by the diaphragm.
electrophrenic respiration induction of respiration by electric stimulation of the phrenic nerve; see phrenic pacemaker. Called also diaphragmatic or phrenic pacing.
external respiration the exchange of gases between the lungs and the blood.
internal respiration the exchange of gases between the body cells and the blood.
Kussmaul's respiration a distressing, paroxysmal dyspnea affecting both inspiration and expiration, characterized by increased respiratory rate (above 20 per minute), increased depth of respiration, panting, and labored respiration; seen in diabetic acidosis and coma and renal failure. Called also air hunger.
paradoxical respiration see paradoxical respiration.
tissue respiration internal respiration.
respiration (omaha) in the omaha system, a client problem in the physiologic domain, defined as the exchange of oxygen and carbon dioxide in the body.
Miller-Keane Encyclopedia and Dictionary of Medicine, Nursing, and Allied Health, Seventh Edition. © 2003 by Saunders, an imprint of Elsevier, Inc. All rights reserved.

(kog'wēl res'pir-ā'shŭn)
The inspiratory sound being broken into two or three by silent intervals.
Medical Dictionary for the Health Professions and Nursing © Farlex 2012 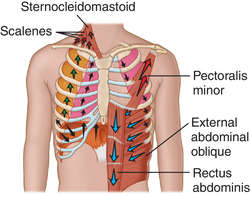