(kok'lē-ăr)
Relating to the cochlea.
Medical Dictionary for the Health Professions and Nursing © Farlex 2012 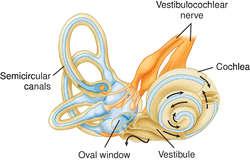 STRUCTURES OF THE COCHLEA

(kŏk′lē-ă) [Gr. kokhlos, land snail]
A winding cone-shaped tube forming a portion of the bony labyrinth of the inner ear. It contains the organ of Corti, the receptor for hearing.

The cochlea is coiled, resembling a snail shell, winding two and three quarters turns about a central bony axis, the modiolus. Projecting outward from the modiolus, a thin bony plate, the spiral lamina, partially divides the cochlear canal into an upper passageway, the scala vestibuli, and a lower one, the scala tympani. Between the two scalae is the cochlear duct, the auditory portion of the membranous labyrinth. The spiral organ (of Corti) lies on its floor. The base of the cochlea adjoins the vestibule. At the cupola or tip, the two scalae are joined at the helicotrema.