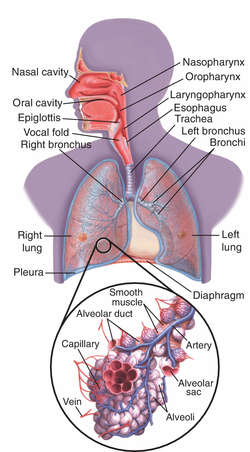 LUNGS
Either of two cone-shaped spongy organs of respiration contained within the pleural cavity of the thorax. See: illustration; alveolus for illus.

The lungs are connected with the pharynx through the trachea and larynx. The base of each lung rests on the diaphragm, and each lung apex rises from 2.5 to 5 cm above the sternal end of the first rib, the collarbone, supported by its attachment to the hilum or root structures. The lungs include the lobes, lobules, bronchi, bronchioles, alveoli or air sacs, and pleural covering.

The left lung has an indentation, called the cardiac depression, for the normal placement of the heart. Behind this is the hilum, through which the blood vessels, lymphatics, and bronchi enter and leave the lung.

Air travels from the nasal passages to the pharynx, larynx, and trachea. Two primary bronchi, one on each side, extend from the trachea. The primary bronchi divide into secondary bronchi, one for each of five lobes. These further divide into a great number of smaller bronchioles. The pattern of distribution of these into the segments of each lobe is important in pulmonary and thoracic surgery. There are about 10 bronchopulmonary segments in the right lung and eight in the left, the actual number varying. There are 50 to 80 terminal bronchioles in each lobe. Each of these divides into two respiratory bronchioles, which in turn divide to form two to 11 alveolar ducts. The alveolar sacs and alveoli arise from these ducts. The spaces between the alveolar sacs and alveoli are called atria.

In the alveolus, blood and inspired air are separated only by the cell of the alveolus and that of the pulmonary capillary. This respiratory membrane is thin (0.07 to 2.0 µm) and permits oxygen to diffuse into the blood and carbon dioxide to diffuse from the blood to the air.

The primary purpose of the lung is to bring air and blood into intimate contact so that oxygen can be added to the blood and carbon dioxide removed from it. This is achieved by two pumping systems, one moving a gas and the other a liquid. The blood and air are brought together so closely that only approx. 1 µm (10-6 m) of tissue separates them. The volume of the pulmonary capillary circulation is 150 ml, but this is spread out over a surface area of approx. 750 sq ft (69.68 sq m). This capillary surface area surrounds 300 million air sacs called alveoli. The blood that is low in oxygen but high in carbon dioxide is in contact with the air that is high in oxygen and low in carbon dioxide for less than 1 second. See: respiratory defense mechanism

Inspection: The examiner determines the respiratory rate by unobtrusively watching the patient's chest rise and fall and counting the number of breaths per minute. In adults a normal respiratory rate at rest is about 12 breaths per minute. While counting the respiratory rate, the examiner can observe other breathing characteristics. Dyspneic patients breathe rapidly, often laboring to draw breath even when at rest. Retractions of the intercostal and supraclavicular spaces are visible during inspiration. Sleep apnea is characterized by episodes of stalled breathing followed by periods of respiratory compensation. Regular slow breathing is normal.

Palpation: In health, the chest and lung transmit a vibration, called fremitus, during speech. Fremitus abnormalities may be felt in chronic obstructive lung diseases or obesity, in which the vibration is diminished, and in pneumonia, in which it is increased over the infected lobe.

Percussion: Tapping on the chest wall over healthy lung results in a hollow resonant sound. The hollow character of the resonance sometimes is exaggerated in emphysematous lungs or in pneumothorax, and muffled by pleural effusions or pulmonary consolidation.

Normal breath sounds: In the healthy person, breath sounds are low-pitched and have a frequency of 200 to 400 cycles per second (cps); frequency rarely exceeds 500 cps. These sounds are called vesicular breath sounds when heard over the lungs. They are produced by air passing in and out of the airways.

Amphoric and cavernous breathing:These two nearly identical sounds are loud, with a prolonged, hollow expiration. The pitch of amphoric breathing is slightly higher than that of the cavernous type, and may be imitated by blowing over the mouth of an empty jar. It is heard in bronchiectatic cavities or pneumothorax when the opening to the lung is patulous; in the consolidation area near a large bronchus; and sometimes over a lung compressed by a moderate effusion.

Harsh inspiratory sounds are typical of stridor, a medical emergency. Expirations that are prolonged and musical are characteristic of wheezing.

Friction: This sound is produced by the rubbing together of roughened pleural surfaces. It may be heard in both inspiration and expiration. Friction often resembles crackle, but is more superficial and localized than the latter and is not modified by cough or deep inspiration.

Metallic tinkling: A silvery bell-like sound heard at intervals over a hydropneumothorax or large cavity. Speaking, coughing, and deep breathing usually induce this sound. It must not be confused with a similar sound produced by liquids in the stomach.

An allergic inflammation of the lung due to exposure to bird excreta. In some patients the onset is slow rather than acute. Symptoms include chills, fever, cough, and shortness of breath and usually subside when exposure to the antigen ceases.
Synonym: pigeon breeder's disease See: psittacosis

Lay term for a form of pneumoconiosis in which carbon and silica deposits accumulate in the lungs due to coal dust inhalation Synonym: anthracosilicosis; coal worker's pneumoconiosis

The shredding-type effect that takes place in the alveolar surfaces of the lung caused by the shock of an explosion or blast, which can cause alveolar contusion.

An allergic respiratory condition caused by the mold Aspergillus.

A colloquial term for a lung with increased markings in its interstitial tissues, usually identified in smokers.

Interstitial lung disease that results from the inhalation of airborne nylon fibers at work. Nylon fibers are used in making products for upholstery, automobiles, carpet, and apparel.

A type of silicosis found in granite miners after exposure to and inhalation of dusts.

An abnormal appearance of the lungs seen on chest x-ray exam, in which small cystic spaces alternate with coarsely increased interstitial markings. This pattern is typical of pulmonary injury caused by inhalation of dusts, minerals, toxic gases, or fibers; rheumatological diseases; and interstitial pneumonitis.

A hypersensitivity pneumonitis typically found in agricultural workers exposed to Aspergillus clavatus spores in barley and other grains.

Lung that cannot expand and contract during respiration because it is restricted by the visceral pleura.