Factor I is a high-molecular-weight plasma protein that is converted to fibrin through the action of thrombin; deficiency conditions are called afibrinogenemia and hypofibrinogenemia. Called also fibrinogen. Factor II is a glycoprotein present in the plasma that is converted into thrombin in the common pathway of coagulation; deficiency is called hypoprothrombinemia. Called also prothrombin. Factor III is involved in the extrinsic pathway of coagulation, activating factor X; called also tissue thromboplastin or factor.

Factor IV is calcium, required in many stages of blood clotting. Factor V is a heat- and storage-labile material, present in plasma and not in serum and is involved in the intrinsic and extrinsic pathways of coagulation, causing the cleavage of prothrombin to the active thrombin. Deficiency causes parahemophilia. Called also accelerator globulin or factor and proaccelerin. Factor VI is no longer considered in the scheme of hemostasis, and hence is assigned neither a name nor a function.

Factor VII is a heat- and storage-stable material, present in serum and in plasma and participating in the extrinsic pathway of coagulation, acting with factor III to activate factor X. Deficiency, either hereditary or acquired (vitamin k deficiency), leads to hemorrhagic tendency. Called also proconvertin and serum prothrombin conversion accelerator (SPCA). Factor VIII is a relatively storage-labile material that participates in the intrinsic pathway of coagulation, acting as a cofactor in the activation of factor X. Deficiency, an X-linked recessive trait, results in hemophilia a (classical hemophilia). Called also antihemophilic factor (AHF) and antihemophilic globulin (AHG). Factor IX is a relatively storage-stable substance involved in the intrinsic pathway of coagulation, acting to activate factor X. Deficiency of this factor results in a hemorrhagic syndrome called hemophilia b (or Christmas disease), which is similar to classical hemophilia A. It is treated with purified preparations of the factor, derived from human plasma or recombinant, or with factor IX complex. Called also plasma thromboplastin component (PTC) and antihemophilic factor B.

Factor X is a heat-labile material with some storage stability, which is involved in both intrinsic and extrinsic pathways of coagulation, uniting them to begin the common pathway. Once activated, it complexes with calcium, phospholipid, and activated factor V to form prothrombinase, which cleaves and activates prothrombin to thrombin. Called also Stuart or Stuart-Prower factor. Factor XI is a stable factor involved in the intrinsic pathway of coagulation, activating factor IX. Deficiency results in hemophilia c. Called also plasma thromboplastin antecedent (PTA) and antihemophilic factor C. Factor XII is a stable factor activated by contact with glass or other foreign substances, which initiates coagulation through the intrinsic pathway by activating factor XI; called also Hageman factor. Factor XIII is a factor that polymerizes fibrin monomers, enabling fibrin to form a firm blood clot. Deficiency causes a clinical hemorrhagic diathesis. Called also fibrin-stabilizing factor.
Miller-Keane Encyclopedia and Dictionary of Medicine, Nursing, and Allied Health, Seventh Edition. © 2003 by Saunders, an imprint of Elsevier, Inc. All rights reserved. 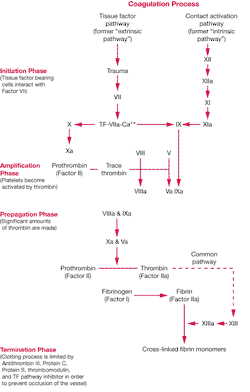 To detect factor deficiencies and related coagulopathies such as found in disseminated intravascular coagulation (DIC).

Whole blood collected in a completely filled blue-top (3.2% sodium citrate) tube. If the patient’s hematocrit exceeds 55%, the volume of citrate in the collection tube must be adjusted.

Hemostasis involves three components: blood vessel walls, platelets, and plasma coagulation proteins. Primary hemostasis has three major stages involving platelet adhesion, platelet activation, and platelet aggregation. Platelet adhesion is initiated by exposure of the endothelium as a result of damage to blood vessels. Exposed tissue factor–bearing cells trigger the simultaneous binding of von Willebrand factor to exposed collagen and circulating platelets. Activated platelets release a number of procoagulant factors, including thromboxane, a very potent platelet activator, from storage granules. These factors enter the circulation and activate other platelets, and the cycle continues. The activated platelets aggregate at the site of vessel injury, and at this stage of hemostasis, the glycoprotein IIb/IIIa receptors on the activated platelets bind fibrinogen, causing the platelets to stick together and form a plug. There is a balance in health between the prothrombotic or clot formation process and the antithrombotic or clot disintegration process. Simultaneously, the coagulation process or secondary hemostasis occurs. In secondary hemostasis, the coagulation proteins respond to blood vessel injury in an overlapping chain of events. The contact activation (formerly known as the intrinsic pathway) and tissue factor (formerly known as the extrinsic pathway) pathways of secondary hemostasis are a series of reactions involving the substrate protein fibrinogen, the coagulation factors (also known as enzyme precursors or zymogens), nonenzymatic cofactors (Ca2+), and phospholipids. The factors were assigned Roman numerals in the order of their discovery, not their place in the coagulation sequence. Factor VI was originally thought to be a separate clotting factor. It was subsequently proved to be the same as a modified form of factor Va, and therefore, the number is no longer used.

The coagulation factors are formed in the liver. They can be divided into three groups based on their common properties:

For many years it was believed that the intrinsic and extrinsic pathways operated equally, in parallel. A more modern concept of the coagulation process has replaced the traditional model (formerly called the coagulation cascade) and is presented on the next page. The cellular-based model includes four overlapping phases in the formation of thrombin: initiation, amplification, propagation, and termination. It is now known that the tissue factor pathway is the primary pathway for the initiation of blood coagulation. Tissue factor (TF)–bearing cells (e.g., endothelial cells, smooth muscle cells, monocytes) can be induced to express TF and are the primary initiators of the coagulation cascade either by contact activation or trauma. The contact activation pathway is more related to inflammation, and although it plays an important role in the body’s reaction to damaged endothelial surfaces, a deficiency in factor XII does not result in development of a bleeding disorder, which demonstrates the minor role of the intrinsic pathway in the process of blood coagulation. Substances such as endotoxins, tumor necrosis factor alpha, and lipoproteins can also stimulate expression of TF. TF, in combination with factor VII and calcium, forms a complex that then activates factors IX and X in the initiation phase. Activated factor X in the presence of factor II (prothrombin) leads to the formation of thrombin. TFPI quickly inactivates this stage of the pathway so that limited or trace amounts of thrombin are produced, which results in the activation of factors VIII and V. Activated factor IX, assisted by activated factors V and VIII, initiate amplification and propagation of thrombin in the cascade. Thrombin activates factor XIII and begins converting fibrinogen into fibrin monomers, which spontaneously polymerize and then become cross-linked into a stable clot by activated factor XIII.

Qualitative and quantitative factor deficiencies can affect the function of the coagulation pathways. Factor V and factor II (prothrombin) mutations are examples of qualitative deficiencies and are the most common inherited predisposing factors for blood clots. Approximately 5% to 7% of Caucasians, 2% of Hispanics, 1% of African Americans and Native American, and 0.5% of Asians have the factor V Leiden mutation, and 2% to 3% of Caucasians and 0.3% of African Americans have a prothrombin mutation. Hemophilia A is an inherited deficiency of factor VIII and occurs at a prevalence of about 1 in 5,000 to 10,000 male births. Hemophilia B is an inherited deficiency of factor IX and occurs at a prevalence of about 1 in about 20,000 to 34,000 male births. Genetic testing is available for inherited mutations associated with inherited coagulopathies. The tests are performed on samples of whole blood. Counseling and informed written consent are generally required for genetic testing.

Feedback
Flashcards & Bookmarks ?
Please log in or register to use Flashcards and Bookmarks. You can also log in with
Flashcards ?
My bookmarks ?
+ Add current page to bookmarks
Mentioned in ?
References in periodicals archive ?
In this manuscript, we report that an LPS challenge upregulated the expression of both inflammatory and coagulation factors in microglia and in the hippocampus.
Thrombin Inhibition Reduces the Expression of Brain Inflammation Markers upon Systemic LPS Treatment
Factor V is a structurally unique coagulation factor (24) composed of a heavy chain and a light chain, joined by a connecting region (Figure 2).
Factor V Inhibitors: A Diagnostic and Therapeutic Challenge
Current opinions suggest that the pathogenesis is multifactorial and mechanisms like activation of the protein C pathway, endothelial injury, coagulation factor deficiency, hyperfibrinolysis, and platelet dysfunction participate in the development of TIC [6-8].
Overexpression of miR-24 Is Involved in the Formation of Hypocoagulation State after Severe Trauma by Inhibiting the Synthesis of Coagulation Factor X
Table: 2 Frequency of various coagulation factor deficiencies (n = 273)
FREQUENCY OF BLEEDING DISORDERS DIAGNOSED AT ARMED FORCES INSTITUTE OF PATHOLOGY RAWALPINDI
The dysfunction of coagulation factor VII Padua results from substitution of arginine-304 by glutamine.
Dysfunctional factor VII variant (FVII tondabayashi) with R79Q: determination of mutated site with monoclonal anti-human factor VII antibody (B101/B1)
Octaplas utilises an optimised production process that holds essential coagulation factors and other proteins, decreases the risk of transmitting non-enveloped and enveloped viruses, minimises single-donor variability, and removes cells and cellular debris.
Octapharma USA introduces Octaplas
The frozen specimens were thawed at 37[degrees]C only once and activity levels of coagulation factors II, V, VII, IX, and X were measured on a photo-optical analyzer (ACL [Automated Coagulation Laboratory] Advance, Instrumentation Laboratory Company, Inc, Lexington, Massachusetts), using PT-Fibrinogen HS (high sensitivity) reagent for factors II, V, VII, and X and APTT-SP reagent for factor IX (Instrumentation Laboratory).
International normalized ratio versus plasma levels of coagulation factors in patients on vitamin K antagonist therapy
Vitamin K is well known for its role in the synthesis of a number of blood coagulation factors. During recent years vitamin Kdependent proteins were discovered to be of vital importance for bone and vascular health.
Beyond deficiency: potential benefits of increased intakes of vitamin K for bone and vascular health
Coagulation factors are proteins that guide the thinning and clotting of blood.
Coagulation factor XI boosts clot risk
Patients with life-threatening bleeding urgently require the replacement of these coagulation factors. In this case, prothrombin complex concentrate serves as a concentrated source of the required coagulation factors.
Some of the players in the Prothrombin complex concentrate market are CSL Behring, China Biologic Pr
In terms of product type, the plasma protein therapeutics market comprises coagulation factors, immunoglobulins, C1-esterase inhibitors, albumins, and others (alpha-1 proteinase inhibitors and hyperimmune globulin).
Transdermal Drug Delivery Market Size, Status and Forecast 2020