[klot´ing]
the formation of a jellylike substance over the ends or within the walls of a blood vessel, with resultant stoppage of the blood flow; called also coagulation.

Clotting is one of the natural defense mechanisms of the body when injury occurs. A clot will usually form within 5 minutes after a blood vessel wall has been damaged. The exact process of clotting is not known; however, it is believed that the mechanism is initiated by the platelets, which adhere and aggregate as they come in contact with the injured surface. As they aggregate they release serotonin and other substances from their dense granules. Serotonin causes constriction of the blood vessels and reduction of blood flow. Thromboplastin unites with calcium ions and other substances that promote the formation of fibrin. When examined under a microscope, a clot consists of a mesh of fine threads of fibrin in which are embedded erythrocytes and leukocytes and small amounts of fluid (serum).

Twelve factors essential to normal blood clotting have been described; see coagulation factors. At least four platelet factors also exist that have a part in clotting.

It is possible for a clot to form within a blood vessel if the inner wall of the vessel has been roughened by injury or disease. Clots may form in conditions such as arteriosclerosis, varicose veins, and thrombophlebitis. An internal clot that remains at the place where it forms is called a thrombus; the general condition is called thrombosis. If the clot (or pieces of it) breaks loose and flows through the blood vessels, it is called an embolus, and the condition is called embolism.

Clotting of the blood can be hastened by contact with injured tissue, by warming, by adding such coagulants as calcium, or by combination with thromboplastin and thrombin. The process can be retarded by cooling, by dilution, by adding oxalates and citrates, or by administration of substances such as heparin and dicumarol, called anticoagulants. 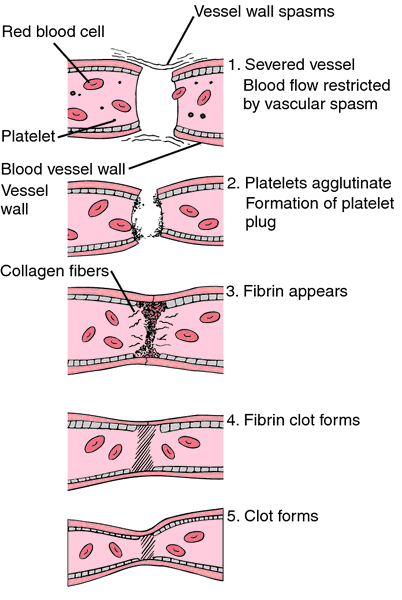 The clotting process.
Miller-Keane Encyclopedia and Dictionary of Medicine, Nursing, and Allied Health, Seventh Edition. © 2003 by Saunders, an imprint of Elsevier, Inc. All rights reserved.

(kloting)
Process of coagulation; the transformation of blood from a liquid into a semisolid mass.
Medical Dictionary for the Health Professions and Nursing © Farlex 2012

Q. What causes blood clots? My father had a heart attack which was caused by a blood clot. Am I at risk for developing blood clots too? How do I prevent it from happening?

A. I found a website that checks your risks for inheriting your family's illness, including blood clots. They have a test you can do which is called "Free Risk Assessment for Thrombophilia":
http://www.dnadirect.com/patients/tests/blood_clotting/more_about/GH_Thr_Risk.jsp

A. Always walk as much as you can on the plane. Also, rotate your ankels in circles. Sometimes try to use your ankels and make the alphabet with them. Have fun..

A. totally agree with hottie, most likely that will be in normal range of variation. unless you feel some unusual pain, then you need to find medical advice. but it is also suggested for you to go to your ob-gyn doctor for a regular checkup anyway.
stay healthy always..
More discussions about clotting
This content is provided by iMedix and is subject to iMedix Terms. The Questions and Answers are not endorsed or recommended and are made available by patients, not doctors.