[tish´u]
a group or layer of similarly specialized cells that together perform certain special functions.
adenoid tissue lymphoid tissue.
adipose tissue connective tissue made of fat cells in a meshwork of areolar tissue.
areolar tissue connective tissue made up largely of interlacing fibers.
bony tissue osseous tissue.
brown adipose tissue (brown fat tissue) brown fat.
bursa-equivalent tissue (bursal equivalent tissue) a hypothesized lymphoid tissue in nonavian vertebrates including human beings, equivalent to the bursa of Fabricius in birds: the site of B lymphocyte maturation. It now appears that B lymphocyte maturation occurs primarily in the bone marrow.
cancellous tissue the spongy tissue of bone.
cartilaginous tissue the substance of cartilage.
chordal tissue the tissue of the notochord.
chromaffin tissue a tissue composed largely of chromaffin cells, well supplied with nerves and vessels; it occurs in the adrenal medulla and also forms the paraganglia of the body.
cicatricial tissue the dense fibrous tissue forming a cicatrix, derived directly from granulation tissue; called also scar tissue.
connective tissue the tissue that binds together and is the support of the various structures of the body; see also connective tissue.
elastic tissue connective tissue made up of yellow elastic fibers, frequently massed into sheets.
endothelial tissue peculiar connective tissue lining serous and lymph spaces.
epithelial tissue a general name for tissues not derived from the mesoderm.
erectile tissue spongy tissue that expands and becomes hard when filled with blood.
fatty tissue connective tissue made of fat cells in a meshwork of areolar tissue.
fibrous tissue the common connective tissue of the body, composed of yellow or white parallel elastic and collagen fibers.
gelatinous tissue mucous tissue.
granulation tissue material formed in repair of wounds of soft tissue, consisting of connective tissue cells and ingrowing young vessels; it ultimately forms cicatrix.
gut-associated lymphoid tissue (GALT) lymphoid tissue associated with the gut, including the tonsils, Peyer's patches, lamina propria of the gastrointestinal tract, and appendix.
indifferent tissue undifferentiated embryonic tissue.
interstitial tissue connective tissue between the cellular elements of a structure.
lymphadenoid tissue tissue resembling that of lymph nodes, spleen, bone marrow, tonsils, and lymph vessels.
lymphoid tissue a latticework of reticular tissue whose interspaces contain lymphocytes.
mesenchymal tissue embryonic connective tissue composed of stellate cells and a ground substance of coagulable fluid.
mucous tissue a jellylike connective tissue, such as occurs in the umbilical cord. Called also gelatinous tissue.
muscular tissue the substance of muscle.
myeloid tissue red bone marrow.
nerve tissue (nervous tissue) the specialized tissue forming the elements of the nervous system.
osseous tissue the specialized tissue forming the bones.
reticular tissue (reticulated tissue) connective tissue composed predominantly of reticulum cells and reticular fibers.
scar tissue cicatricial tissue.
sclerous t's the cartilaginous, fibrous, and osseous tissues.
skeletal tissue the bony, ligamentous, fibrous, and cartilaginous tissue forming the skeleton and its attachments.
splenic tissue red pulp.
subcutaneous tissue the layer of loose connective tissue directly under the skin.
tissue typing identification of tissue types for purposes of predicting acceptance or rejection of grafts and transplants. The process and purposes of tissue typing are essentially the same as for blood typing. The major difference lies in the kinds of antigens being evaluated. The acceptance of allografts depends on the hla antigens (HLA); if the donor and recipient are not HLA identical, the allograft is rejected, sometimes within minutes. The HLA genes are located in the major histocompatibility complex, a region on the short arm of chromosome 6, and are involved in cell-cell interaction, immune response, organ transplantation, development of cancer, and susceptibility to disease. There are five genetic loci, designated HLA-A, HLA-B, HLA-C, HLA-D, and HLA-DR. At each locus, there can be any of several different alleles.

Each person inherits one chromosome 6 from the mother and one from the father; that is, each parent transmits to the child one allele for each kind of antigen (A, B, C, D, and DR). If the parents are different at both alleles of a locus, the statistical chance of one sibling being identical to another is one in four (25 per cent), the chance of being identical at one allele only (half-identical) is 50 per cent, and the chance of a total mismatch is 25 per cent.
Techniques for Tissue Typing. Histocompatibility testing involves several basic methods of assay for HLA differences. The most widely used method uses the polymerase chain reaction to compare the DNA of the person, organ, or graft being tested with known pieces of the genes encoding MHC antigens. The variability of these regions of the genes determines the tissue type of the subject.

Serologic methods are used to detect serologically defined antigens on the surfaces of cells. In general, HLA-A, -B, and -C determinants are primarily measured by serologic techniques. A second method, involving lymphocyte reactivity in a mixed lymphocyte culture, for determining HLA-D or lymphocyte-defined antigens, is now only rarely used.

Essentially, the serologic method is performed by incubating target lymphocytes (isolated from fresh peripheral blood) with antisera that recognize all known HLA antigens. The cells are spread in a tray with microscopic wells containing various kinds of antisera and are incubated for 30 minutes, followed by an additional 60-minute complement incubation. If the lymphocytes have on their surfaces antigens recognized by the antibodies in the antiserum, the lymphocytes are lysed. A dye is added to show changes in the permeability of the cell membrane and cellular death. The proportion of cells destroyed by lysis indicates the degree of histologic incompatibility. If, for example, the lymphocytes from a person being tested for HLA-A3 are destroyed in a well containing antisera for HLA-A3, the test is positive for this antigen group.
white adipose tissue (yellow adipose tissue) the adipose tissue composing the bulk of the body fat.
Miller-Keane Encyclopedia and Dictionary of Medicine, Nursing, and Allied Health, Seventh Edition. © 2003 by Saunders, an imprint of Elsevier, Inc. All rights reserved.

a cellular tissue, vascular and well supplied with nerves, made up chiefly of chromaffin cells; it is found in the medulla of the suprarenal glands and, in smaller collections, in the paraganglia.
Farlex Partner Medical Dictionary © Farlex 2012

(krō-maf'in tish'ū)
A cellular tissue, vascular and well supplied with nerves, made up chiefly of chromaffin cells; it is found in the medulla of the suprarenal glands and, in smaller collections, in the paraganglia.
Medical Dictionary for the Health Professions and Nursing © Farlex 2012

(tish'oo) [Fr. tissu, from L. texere, to weave]
A group or collection of similar cells and their intercellular substance that perform a particular function. The four major groups are epithelial, connective, muscular, and nervous tissues.

A form of loose connective tissue consisting of fibroblasts in a matrix of tissue fluid and collagen and elastin fibers. Many white blood cells are present. It is found subcutaneously and beneath the epithelium of all mucous membranes. See: connective tissue for illus Spongy bone with many marrow cavities. It is present at the ends of long bones and in the interior of most flat bones. 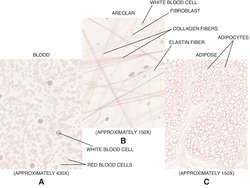 A form of connective tissue in which yellow elastic fibers predominate. It is found in certain ligaments, the walls of blood vessels, esp. the larger arteries, and around the alveoli of the lungs.

Any tissue that arises from the fertilization of an ovum and has not become differentiated or specialized.

Spongy tissue, the spaces of which fill with blood, causing it to harden and expand. It is found in the penis, clitoris, and nipples.

Tissue from which gelatin may be obtained by treating it with hot water.

A group of epithelial cells capable of producing secretions.

The newly formed vascular and connective tissue produced in the early stages of wound healing.

In dentistry, the term used to denote any of the three calcified tissue components of the tooth: enamel, dentin, and cementum.

Tissues that are identical in structure.

Tissue composed of undifferentiated cells as in embryonic tissue.

Connective tissue that forms a network with the cellular portions of an organ.

Aggregates of lymphatic tissue found in the spleen and lymph nodes.

Collections of lymphocytes in all stages of development found in the spleen, thymus, lymph nodes, lymph nodules of the digestive tract (tonsils, Peyer's patches), and the respiratory, urinary, and reproductive tracts.

Abbreviation: MALT
Aggregates of T and B lymphocytes found in all mucous membranes, a line of defense against infection. Examples include Peyer's patches in the small intestine and lymph nodules in the colon, trachea, and bronchi. MALT contains CD4+ and CD8+ T cells and activated B cells and may occasionally undergo malignant transformation into lymphomas.
See: mucosal immune system

The jellylike connective tissue of the umbilical cord.

The bone marrow in which most blood cells are formed.

The neurons and neuroglia of the nervous system.
See: neuron

Firm connective tissue such as bone and cartilage.

Any noncalcified tissue in the body. This term is especially used in relation to muscles, tendons, ligaments, skin, fat, and other connective tissues that are occasionally the source of pain when they are injured. Unlike bones or joints, which can be fractured or dislocated, soft tissues are bruised or inflamed by trauma. In surgery, soft tissues are dissected. By contrast, components of the (hard) bony skeleton are sawed, chiselled, or drilled. Soft tissues include all types of tissue except bone, i.e., all epithelial, muscle, and nerve tissue, as well as connective tissue excluding bone.

Feedback
Flashcards & Bookmarks ?
Please log in or register to use Flashcards and Bookmarks. You can also log in with
Flashcards ?
My bookmarks ?
+ Add current page to bookmarks
Mentioned in ?
References in periodicals archive ?
Pheochromocytomas are tumours of adrenal gland or extra-adrenal chromaffin tissues discovered in 0.1% of patients with hypertension.1 About 4% patients with incidentally discovered adrenal nodules are found to have pheochromocytoma.3 An overwhelming majority of these tumours are benign with malignancy reported in approximately 10% of cases at diagnosis.
Acute cardiomyopathy and multiorgan failure in a patient with pheochromocytoma and neurofibromatosis type 1
The diagnosis of malignant PPGL requires finding this tumor in sites that do not normally contain chromaffin tissues (e.g., liver, bone, lung, omemtum, or lymph nodes).
Pheochromocytoma
Expression of phenylethanolamine N-methyltranspherase in rat sympathetic ganglia and extra-adrenal chromaffin tissue. Dev.
Analisis morfometrico y estereologico del ganglio cervical superior de Rattus norvegicus sometido a tratamiento cronico con cortisol
The area known as the organ of Zuckerkandl (aorticosympathetic group) encompasses all extra-adrenal chromaffin tissue near the origin of the inferior mesenteric artery and the aortic bifurcation.
A retroperitoneal mass in a 44-year-old woman with recurrent myocardial infarctions. (Pathologic Quiz Case)