[klor-ak´ne]
an acneiform eruption, caused by exposure to chlorine compounds.

(klōr-ak'nē),
An acnelike eruption due to occupational contact, by inhalation or ingestion or through the skin, with certain chlorinated compounds (naphthalenes and diphenyls) used as insulators, insecticides, fungicides, and herbicides, including Agent Orange; keratinous plugs (comedones) form in the pilosebaceous orifices, and variously sized small papules (2 to 4 mm) develop.
Synonym(s): tar acne

An acneiform eruption of blackheads, cysts and pustules on the cheeks, behind the ears, in axilla and the groin, linked to exposure to halogenated aromatic compounds (e.g., chlorinated dioxins and dibenzofurans, and herbicides such as Agent Orange). 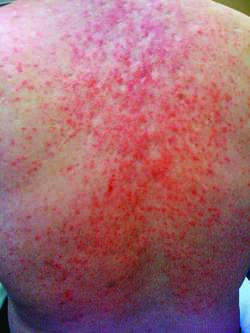 CHLORACNE: In a Vietnam veteran who was exposed to Agent Orange

(klor-ăk′nē)
Generalized acne that usually occurs after industrial exposure to chemicals such as polychlorinated biphenyls (PCBs) or dioxin.
See: illustration