[kap]
1. a covering.
2. a maximum budgetary limit.
cervical cap a contraceptive device similar to the diaphragm but much smaller, consisting of a cup that fits directly over the cervix. It is only 60 per cent effective for women who have already given birth. 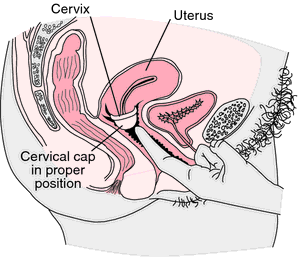 The cervical cap is inserted much like the diaphragm. The woman should check to be certain that it is placed over the cervix. From McKinney et al., 2000.
cradle cap an oily yellowish crust that sometimes appears on the scalp of an infant, caused by excessive secretion by the sebaceous glands in the scalp. Treatment of mild cases consists of daily shampoo with mild soap. It can be loosened with an application of mineral oil or baby oil prior to shampooing. Called also milk crust and crusta lactea.
Miller-Keane Encyclopedia and Dictionary of Medicine, Nursing, and Allied Health, Seventh Edition. © 2003 by Saunders, an imprint of Elsevier, Inc. All rights reserved.

n.
A small, rubber, cup-shaped contraceptive device that fits over the uterine cervix to prevent the entry of sperm.
The American Heritage® Medical Dictionary Copyright © 2007, 2004 by Houghton Mifflin Company. Published by Houghton Mifflin Company. All rights reserved.
A barrier-type contraceptive consisting of a semirigid plastic cap that fits tightly over the uterine cervix, holding spermicide against it; CCs are functionally similar to diaphragms, but can be left in place for longer periods; CCs must be fitted, and they may not work on all women, due to cystocele or short anterior vaginal wall
Segen's Medical Dictionary. © 2012 Farlex, Inc. All rights reserved.

(sĕrvi-kăl kap)
Contraceptive diaphragm that fits over the cervix uteri.
Medical Dictionary for the Health Professions and Nursing © Farlex 2012

Feedback
Flashcards & Bookmarks ?
Please log in or register to use Flashcards and Bookmarks. You can also log in with
Flashcards ?
My bookmarks ?
+ Add current page to bookmarks
Mentioned in ?
References in periodicals archive ?
If you want to use a diaphragm or cervical cap, wait until after your sixth postpartum week; diaphragms and cervical caps need to be fitted after you completely heal, and it's not advisable to use them until you've stopped bleeding.
Contraception
When used with a female mechanical barrier method (for example a cervical cap or diaphragm) N-9 is more effective than when used alone.
WHO/CONRAD technical consultation on nonoxynol-9, World Health Organization, Geneva, 9-10 October 2001: summary report *
The number of prescriptions filled or refilled (scripts) and the number of devices purchased (for the other reversible medical methods--diaphragms, cervical caps, injectables, implants and IUDs) were estimated based on the number of privately insured women using each of these methods relative to the number using oral contraceptives, adjusted for the number of units of each method needed to equal one year of use.
Cost to employer health plans of covering contraceptives summary, methodology and background
The Food and Drug Administration approved marketing of the cervical cap in May 1988 after a National Institutes of Health study and other reports demonstrated its effectiveness in preventing pregnancy.
Preventing pregnancy with the cervical cap
BARRIER METHODS: DIAPHRAGM, CERVICAL CAP, FEMALE & MALE CONDOM, SPERMICIDES, SPONGE
Birth control options: the Cedar River Clinic's Birth Control Chart
Kaiser Family Foundation mistook the diaphragm and cervical cap as preventive of STD.
Teens largely misunderstand contraception
More than one in four didn't know that oral contraceptives offered no protection against sexually transmitted diseases, and a majority mistook the diaphragm and the cervical cap as preventive of STDs.
Contraception misperception
Just consider--Mirena, the intrauterine system; Ortho Evera, the contraceptive patch; NuvaRing, the contraceptive ring; Implanon, the progesterone implant; Lea's Shield, the cervical cap; and Essure, the female sterilization device.
Contraceptive choice: responsibility of both women and men. (From the Editor)
The FemCap is a new silicone vaginal contraceptive device, somewhat like a cervical cap, that fits over the cervix.
Current contraceptive research. (Special Report)
Why was there such concern about the safety of the cervical cap, which could have been studied from decades of use in Europe?
Birth control, culture and the control of women
The success of this product is the result of Rinovum having provided the first take-home true aid in conception for consumers that is a safe, easy way to perform cervical cap insemination, an established conception technique previously available only by prescription and in a doctor's office.
Rinovum offers family planning option
The cervical cap is smaller and more rigid and fits over the cervix, where it's held in place by suction.
Which birth control method is best for you? IF A BABY IS NOT ON YOUR "TO-DO" LIST JUST NOW, CONTRACEPTION IS A MUST. HERE, DR MIRIAM STOPPARD LOOKS AT THE VARIETY OF METHODS ON OFFER