[ser´ĕ-brum]
the main portion of the brain, occupying the upper part of the cranial cavity; its two cerebral hemispheres, united by the corpus callosum, form the largest part of the central nervous system in humans. The term is sometimes extended to refer to the postembryonic forebrain and midbrain together or to the entire brain.
Miller-Keane Encyclopedia and Dictionary of Medicine, Nursing, and Allied Health, Seventh Edition. © 2003 by Saunders, an imprint of Elsevier, Inc. All rights reserved.

(ser'ĕ-brŭm, sĕ-rē'brŭm; -bră; -brŭmz), [TA] Although the pronunciation of this word with stress on the first syllable is classically correct, the second syllable is often stressed in the U.S.
Term originally referring to the largest portion of the brain, including practically all parts within the skull except the medulla, pons, and cerebellum; it now usually refers only to those parts derived from the telencephalon and includes mainly the cerebral hemispheres (cerebral cortex and basal nuclei, also called basal ganglia).
[L., brain]
Farlex Partner Medical Dictionary © Farlex 2012

(sĕr′ə-brəm, sə-rē′-)
n. pl. cere·brums or cere·bra (-brə)
The large rounded structure of the brain occupying most of the cranial cavity, divided into two cerebral hemispheres that are joined at the bottom by the corpus callosum. It controls and integrates motor, sensory, and higher mental functions, such as thought, reason, emotion, and memory.
The American Heritage® Medical Dictionary Copyright © 2007, 2004 by Houghton Mifflin Company. Published by Houghton Mifflin Company. All rights reserved.

The epicentre of the central nervous system, which is located within the cranial vault and divided into the right and left hemispheres. The brain functions as a primary receiver, organiser and distributor of information for the body; it is the centre of thought and emotion, co-ordinates and controls bodily activities and interprets sensory visual, auditory, olfactory, tactile and other information.
Segen's Medical Dictionary. © 2012 Farlex, Inc. All rights reserved.

, pl. cerebra (ser'ĕ-brŭm, -bră) [TA]
Originally referred to the largest portion of the brain; it now usually refers only to the parts derived from the telencephalon and includes mainly the cerebral hemispheres (cerebral cortex and basal ganglia).
[L., brain]
Medical Dictionary for the Health Professions and Nursing © Farlex 2012 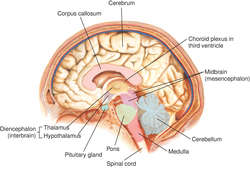 CEREBRUM)
The largest part of the brain, consisting of two hemispheres separated by a deep longitudinal fissure. The hemispheres are united by three commissures—the corpus callosum and the anterior and posterior hippocampal commissures. The surface of each hemisphere is thrown into numerous folds or convolutions called gyri, which are separated by furrows called fissures or sulci.

The cerebrum develops from the telencephalon, the most anterior portion of the prosencephalon or forebrain.

Each cerebral hemisphere consists of three primary portions—the rhinencephalon or olfactory lobe, the corpus striatum, and the pallium or cerebral cortex. The cortex is a layer of gray matter that forms the surface of each hemisphere. The part in the rhinencephalon (phylogenetically the oldest) is called the archipallium; the larger nonolfactory cortex is called the neopallium. The cerebrum contains two cavities, the lateral ventricles (right and left) and the rostral portion of the third ventricle. The white matter of each hemisphere consists of three kinds of myelinated fibers: commissural fibers, which pass from one hemisphere to the other; projection fibers, which convey impulses to and from the cortex; and association fibers, which connect various parts of the cortex within one hemisphere.

Lobes: The principal lobes are the frontal, parietal, occipital, and temporal lobes and the central (the insula or island of Reil). Basal ganglia: Masses of gray matter are deeply embedded within each hemisphere. They are the caudate, lentiform, and amygdaloid nuclei and the claustrum. Fissures and sulci: These include the lateral cerebral fissure (of Sylvius), the central sulcus (of Rolando), the parieto-occipital fissure, the calcarine fissure, the cingulate sulcus, the collateral fissure, the sulcus circularis, and the longitudinal cerebral fissure. Gyri: These include the superior, middle, and inferior frontal gyri, the anterior and posterior central gyri, the superior, middle, and inferior temporal gyri, and the cingulate, lingual, fusiform, and hippocampal gyri.

The cerebrum is concerned with sensations (the interpretation of sensory impulses) and all voluntary muscular activities. It is the seat of consciousness and the center of the higher mental faculties such as memory, learning, reasoning, judgment, intelligence, and the emotions. See: illustration

The largest, and most highly developed, part of the brain. It contains the neural structures for memory and personality, cerebration, volition, speech, vision, hearing, voluntary movement, all bodily sensation, smell, taste and other functions.
Collins Dictionary of Medicine © Robert M. Youngson 2004, 2005

that part of the forebrain which expands to form the CEREBRAL HEMISPHERES, found in all vertebrates except fishes.
Collins Dictionary of Biology, 3rd ed. © W. G. Hale, V. A. Saunders, J. P. Margham 2005

Feedback
Flashcards & Bookmarks ?
Please log in or register to use Flashcards and Bookmarks. You can also log in with
Flashcards ?
My bookmarks ?
+ Add current page to bookmarks
Mentioned in ?
References in periodicals archive ?
Linear dimensions (greatest lengths and breadths) of OBC and the cerebrum are presented in Table II.
A Gross Morphometric Study of Olfactory Brain Components in the Rufous Sengi (Elephantulus rufescens)/Estudio Morfometrico de los Componentes Olfativo del Cerebro en el Rufo Sengi (Elephantulus rufescens)
molmol on Nrf2 and HO-1 expression in the cerebrum, Western blotting was used as we previously reported [48].
Commiphora molmol Modulates Glutamate-Nitric Oxide-cGMP and Nrf2/ARE/HO-1 Pathways and Attenuates Oxidative Stress and Hematological Alterations in Hyperammonemic Rats
Strong immuno-reactivity in hippocampus followed by cerebellum and cerebrum suggested that the intense staining was directly correlated with the amount of rabies virus antigens present in the brain tissues (Jogai et al., 2000).
IMMUNOPATHOLOGICAL STUDIES OF CANINE RABIES IN FAISALABAD, PAKISTAN
Just below the cerebrum is the cerebellum (sehr-uh-BELL-um).
The amazing brain
Instead, stick with one tablet twice daily of Arnica 30c, along with Cerebrum take 10 drops twice daily before meals to help improve memory and stamina.
I'm in my early 20s and I still have acne; DR YVONNE CASEY'S COMPLEMENTARY MEDICINE
Three brain regions are activated when you read--all within the left hemisphere of your cerebrum, the largest area of your brain, also known as your "gray matter." The cerebrum's left hemisphere helps you read and understand language.
l learning disorders: life: dyslexia can make reading seem impossible. Find out how one teen overcame this learning disorder
On day 20, rats were sacrificed and serum NO levels, placental weight, fetal body weight, fetal cerebrum weight and the thickness of the cerebral cortex were analyzed.
The herbal medicine Toki-shakuyaku-san improves the hypertension and intrauterine growth retardation in preeclampsia rats induced by [N.sub.[omega]]-nitro-L-arginine methyl ester
bicuspid carotid cerebrum hyoid incus lacrimal mandible masseter maxilla occipital parietal scapula stapes tarsus temporal thyroid
All I want for Christmas is a Tulip Time trip!
Heartlands isn't going to set the film world or your cerebrum alight but it's still well worth a watch.
FRIDAY LIVE: This green and pleasant land
When investigators in the 18th century showed that rabbits continue to breathe after their cerebrum and cerebellum are removed, researchers began to concentrate on the brainstem.
Breathtaking science: biologists home in on the brain area that drives respiration
The biggest part of the brain is the cerebrum. This is divided into right and left hemispheres which control opposite sides of the body.
Your awesome body: the brain
This essay is adapted from an article that originally appeared in Cerebrum: The Dana Forum on Brain Science.
Science and Self-doubt