(sen'tĕr) [TA]
1. The middle point of a body.
2. A center of any kind, especially an anatomic center.
Synonym(s): centrum [TA] , centre.
3. A group of nerve cells governing a specific function.
4. A health care or therapeutic facility performing a particular function or service for people in the surrounding area.
Synonym(s): centre.
[L. centrum; G. kentron]
Medical Dictionary for the Health Professions and Nursing © Farlex 2012

(sent'er) [L. centrum, center fr Gr. kentron, point, needle, pivot]
1. The middle point of a body.
2. A group of nerve cells within the central nervous system that controls a specific activity or function.

The hearing center in the brain, located in the temporal lobe of the cerebrum.

A center for daytime supervision of adults. These centers provide supervised social, recreational, and health-related activities, usually in a group setting. The centers permit caregivers a respite and free them for other activities (work, play, appointments, socialization) during the day.

An outpatient surgical center for cardioversions, endoscopies, and other relatively minor operations that do not require prolonged confinement in a hospital.

A cluster of brainstem neurons, located in the lower pons, that regulate breathing by prolonging inhalation.

The center for hearing in the anterior gyri of the transverse temporal gyri.
See: auditory area

The center in the brain or spinal cord that regulates any of the activities under the control of the autonomic nervous system. Most centers are located in the hypothalamus, medulla oblongata, and spinal cord.

An alternative nonhospital facility that provides family-oriented maternity care for women judged to be at low risk of experiencing obstetrical complications.

A communications center that manages incoming and outgoing telephone calls with customers and clients. In health care, the center may help to manage appointments and messages or may provide patients with information about illnesses, health care resources, services provided, or self-management of disease.

The center in the medulla oblongata that gives rise to impulses that speed up the heart rate. Impulses reach the heart by way of sympathetic fibers.

The center in the medulla oblongata that gives rise to impulses that decrease the heart rate. Impulses reach the heart by way of the vagus (parasympathetic) nerves.

The center of cartilage formation.

The center in the spinal cord that transmits sympathetic impulses that dilate the pupils of the eyes.

A place for the care of preschool children when their parents are for any reason unable to care for them. Initially, such facilities were open during normal working hours, but many now offer early drop-off and late pickup.

A group of structures in the brain that controls swallowing. These structures are located in the medulla oblongata and in the inferior pons.

1. An area in the floor of the fourth ventricle of the brain.
2. A health care facility that provides specialized care to patients with diabetes mellitus.

The ossification center of the temporal bone, forming the upper and posterior part of the auditory capsule.

An area in the ventrolateral nucleus of the hypothalamus that originates signals to the cerebral cortex that stimulate eating.
See: satiety center; set point weight

A collection of B cells undergoing proliferation within the follicle of a lymph node or other lymphoid tissue after antigen stimulation.

Either of two centers, a heat loss and a heat production center, located in the hypothalamus. They regulate body temperature.

A center in any portion of the brain, in contrast to one in the spinal cord.

A community facility that coordinates services for the disabled, including counseling, training, rehabilitation, assistance with devices, and respite care.

The respiratory center, located in the rostral half of the reticular formation overlying the olivary nuclei, that generates impulses that cause contraction of the diaphragm and external intercostal muscles.

A center in the brainstem or spinal cord. 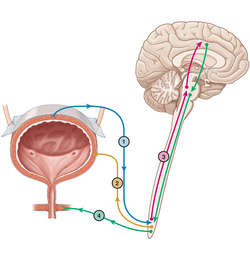 A center that controls the reflexes of the urinary bladder. These are located in the second to fourth and fourth to sixth sacral segments of the cord. Higher centers are present in the medulla oblongata, hypothalamus, and cerebrum.
See: illustration

An area in the frontal lobe in which impulses for voluntary movements originate.

An area in the central nervous system or in a ganglion that is responsible for certain functions; examples include the motor areas in the frontal lobes of the cerebrum.

1. An embryonic group of cells that induces the development of another structure.
2. A region in an ovum that is responsible for the mode of development of the fertilized ovum.

The site or sites in bones where calcification begins and bone replaces fibrous connective tissue or cartilage. The region of bone formation at the center of the body of a long bone is called the primary (diaphyseal) ossification center. Most secondary ossification centers are found in the epiphyses.

The axis on which the tube head and cassette of a panoramic x-ray machine rotate.

The center in the pons that rhythmically inhibits inspiration.

, poison center
A facility meeting the staffing and equipment standards of the American Association of Poison Control Centers and recognized to be able to give information about poisoning or treatment to patients suffering from poisoning. A poison information center consists of specially trained staff and a reference library but does not have treatment facilities. More than 400 poison centers are scattered throughout the U.S., offering 24-hr service. They are commonly associated with or are part of large hospitals or medical schools. A government agency (the Bureau of Drugs Division of the Poison Control Branch of the Food and Drug Administration, U.S, Department of Health and Human Services) is also active in poison control programs and in coordinating the efforts of individual centers. In the U.S., all poison control centers can be reached by calling 1-800-222-1222.

Any of the centers of the cerebral cortex concerned with voluntary muscular contractions.

A region within the brain or spinal cord where connections (synapses) are made between afferent and efferent neurons of a reflex arc.

A region in the medulla oblongata of the brainstem that regulates movements of respiration. This area consists of an inspiratory center and an expiratory center. The pons contains the apneustic center and the pneumotaxic center.

An area in the ventromedial hypothalamus that modulates the stimulus to eat by sending inhibitory impulses, following a meal, to the feeding center. Blood levels of nutrients and gastrointestinal hormones influence its activity.

A community building or meeting room where older adults gather for education, recreation, and services and activities that reflect their interests, enhance their dignity, support their independence, and encourage their involvement with the community. There are approx. 15,000 centers across the U.S., serving close to 10 million older adults annually. Most are supported by government and local nonprofit organizations. Since 1965, the Older Americans Act has provided some funding support to over 6000 senior centers through service contracts for program activities.

A tertiary care hospital that specializes in the care of patients with acute neurological dysfunction, esp. the administration of thrombolytic drugs to appropriately selected patients with acute ischemic stroke; the management of patient blood pressure, glucose levels, and electrolytes; early mobilization of patients; and the prevention of complications of stroke, including deep venous thrombosis, depression, malnutrition, and pressure ulcers.

A health care facility for preventing suicide by counseling and crisis intervention.

Any of the principal centers controlling perspiration located in the hypothalamus; secondary centers are present in the spinal cord.

A center in the hypothalamus that regulates heat production and heat loss, esp. the latter, so that a normal body temperature is maintained. It is influenced by nerve impulses from cutaneous receptors and by the temperature of the blood flowing through it. Synonym: temperature center

The center in the medulla oblongata that brings about the constriction of blood vessels.

The center in the medulla oblongata that brings about the dilation of blood vessels.

The center that controls the diameter of blood vessels; the vasoconstrictor and vasodilator centers.

A center in the occipital lobes of the cerebrum that receives visual information transmitted from the retina.

Any of the centers in the medulla concerned with respiration, heart rate, or blood pressure.
Medical Dictionary, © 2009 Farlex and Partners

(sen'tĕr) [TA]
1. The middle point of a body; loosely, the interior of a body, especially an anatomic center.
2. A group of nerve cells governing a specific function.
[L. centrum; G. kentron]
Medical Dictionary for the Dental Professions © Farlex 2012

A. here is a quote from the National Fibromyalgia Association site:

"Little research has been conducted that measures the prevalence of fibromyalgia, and estimates vary widely as to the proportion of male versus female patients. A 1999 epidemiology study conducted in London found a female to male ratio of roughly three to one. However, a 2001 review of the research literature in Current Rheumatology Reports stated the ratio was nine to one."

Q. Do you know where can I find alcoholism treatment centers in Forest Grove, Pennsylvania? My stepmother is asking for my help to find an alcoholism treatment center where she can admit her daughter. Sabina, my stepsister has been addicted to alcohol ever since our dad died. Though we weren't very close, I still want her back to her normal state for she's still my sister. Please help me.

A. Look in the phone book for AA or Alcoholics Anonymous and call and you will find the best answer for your particular questions. Don't wait.

Q. What happens in rehab centers? How do they “cure” alcoholics and drug addicts?

A. REHAB;for alcoholics are the same as rehabs for drugs addicted people--alcohol is a drug,people learn how to deal with ther disease,they learn how to ask for help when they fell like drinking,they learn how to go to meetings everyday,they learn how to stay away from people places and things that remind them of drinking(bars)(friends).rehabs DO NOT CURE YOU they teach you how to cure yourself or stay away from alcohol/drugs---mrfoot56---peace
More discussions about center
This content is provided by iMedix and is subject to iMedix Terms. The Questions and Answers are not endorsed or recommended and are made available by patients, not doctors.