[ton´sil]
1. a small, rounded mass of tissue.
2. one of the fleshy masses of lymphoid tissue at the back of the throat. adj., adj ton´sillar.

There are three different kinds of tonsils: the palatine tonsils are a pair of oval-shaped structures about the size of almonds, partially embedded in the mucous membrane, one on each side of the back of the throat. The lingual tonsils are below the palatine tonsils at the base of the tongue. The pharyngeal tonsils, or adenoids, are on the upper rear wall of the mouth cavity; they are of fair size in childhood but usually shrink after puberty. The tonsils are part of the lymphatic system and help to filter the circulating lymph of bacteria and any other foreign material that may enter the body, especially through the mouth and nose. In the process of fighting infection the palatine tonsils and the adenoids sometimes become enlarged and inflamed (see tonsillitis).
tonsil of cerebellum a rounded mass forming part of the cerebellum on its inferior surface.

(ton'sil),
1. Intramucosal collection of lymphocytes or aggregated lymphoid tissue closely associated with the overlying epithelium, including the pharyngeal tonsil (adenoid), palatine tonsil, and lingual tonsil, that collectively form a lymphoepithelial ring in the pharynx.
2. Synonym(s): palatine tonsil
3. An anatomic structure resembling the palatine tonsil in form.
[L. tonsilla, a stake, in pl. the tonsils]

(tŏn′səl)
n.
A small oral mass of lymphoid tissue, especially either of two such masses embedded in the lateral walls of the opening between the mouth and the pharynx, of uncertain function, but believed to help protect the body from respiratory infections.
ton′sil·lar adj.

(ton'sil) [L. tonsilla, almond]
1. A mass of lymphoid tissue in the mucous membranes of the pharynx and base of the tongue. The free surface of each tonsil is covered with stratified squamous epithelium that forms deep indentations, or crypts, extending into the substance of the tonsil. The palatine tonsils, pharyngeal tonsils (adenoids), and lingual tonsils form a ring of immunologically active tissue. 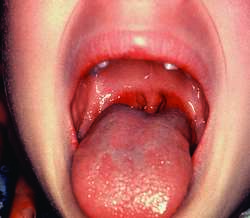 INFLAMED TONSILS: Source: Centers for Disease Control and Prevention
2. A rounded mass on the inferior surface of the cerebellum lying lateral to the uvula.

Infection of the Tonsils

Tonsils detect and respond to pathogens entering the body through the mouth and nose. Inflammation of the tonsils (tonsillitis) occurs during upper respiratory infections caused by common viruses. Beta-hemolytic streptococci or, occasionally, Staphylococcus aureus infections may occur as primary infections or follow viral infections, most commonly in children and immunocompromised adults. Clinically, the patient will have enlarged, reddened, tender glands, often coated with inflammatory exudate, which may form a pseudomembrane. The tonsils may stay enlarged after multiple infections and are sometimes surgically removed (tonsillectomy). See: illustration

Rheumatic fever, an autoimmune inflammatory disease, develops 2 to 3 weeks after streptococcal infections in about 3% of patients; it is believed that antibodies against streptococcal pharyngitis cross-react with antigens in the heart and joints.

One of a pair of cerebellar lobules on either side of the uvula, projecting from the inferior surface of the cerebellum.

A mass of lymphoid tissue located in the root of the tongue.

Lymphoid tissue on the nasal septum.

Two oval masses of lymphoid tissue that lie in the tonsillar fossa on each side of the oral pharynx between the glossopalatine and pharyngopalatine arches. They are commonly known as the tonsils. Synonym: faucial tonsil

Lymphoid tissue on the roof of the posterior superior wall of the nasopharynx. It is commonly called adenoids.
See: adenoid

Lymphoid tissue located in the mucous membrane of the tube connecting the middle ear to the nasopharynx.

1. An oval mass of lymphoid tissue, of variable size, situated on the back of the throat on either side of the soft palate.
2. Any bodily structure resembling the palatine tonsil.

one of the two large outgrowths at the back of the human oral cavity which have a lymphatic function. The tissue can become infected, resulting in considerable soreness and general ill-health. The removal of children's tonsils by surgery (tonsillectomy) used to be common, but is less popular nowadays.

Q. how do i cure tonsil stones (tonsiloth)?

A. There are very little literature about this subject, but I heard about treatment in which the crypts (deep and narrow grooves on the tongue in which the stones form) are burned with laser.

As far as I know these stones don't cause damage by themselves so it's not such a common treatment.

You may read more here:
http://en.wikipedia.org/wiki/Tonsillolith

Q. When should the tonsils and/or adenoids should be removed?

A. Currently the tonsillectomy is recommended in the presence of 6 episodes of throat infection (Group A strep pharyngitis) in one year or 3-4 episodes in each of 2years. Adenoidectomy may be recommended when tympanostomy tube surgery (http://en.wikipedia.org/wiki/Tympanostomy_tube) failed to prevent ear infection.

Another thing to consider is the presence of oral breathing - the constant use of the mouth for breathing in small children may lead to malformation of the facial bones that would necessitate more extensive surgeries later in life.
More discussions about tonsil