[TA]
the space within the thoracic walls, bounded below by the diaphragm and above by the base of the neck or superior thoracic aperture.
Synonym(s): cavitas thoracica/thoracis [TA], cavum thoracis
Farlex Partner Medical Dictionary © Farlex 2012

(thōr-as'ik kav'i-tē) [TA]
The space within the thoracic walls, bounded below by the diaphragm and above by the neck.
Medical Dictionary for the Health Professions and Nursing © Farlex 2012 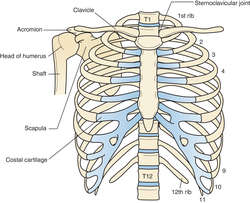 The part of the ventral cavity above the diaphragm, the domed muscle that separates it from the abdominal cavity; it is enclosed by the chest wall. The thoracic viscera include the pleural membranes that surround the lungs, the mediastinum between the lungs, which contains the heart and pericardial membranes, the thoracic aorta, pulmonary artery and veins, vena cavae, thymus gland, lymph nodes, trachea, bronchi, esophagus, and thoracic duct. See: illustration
See also: cavity
Medical Dictionary, © 2009 Farlex and Partners