(fle)
An insect of the order Siphonaptera. Fleas are wingless, suck blood, and have legs adapted for jumping. Usually they are parasitic on warm-blooded animals, including humans. Fleas of the genus Xenopsylla transmit the plague bacillus (Yersinia pestis) from rats to humans. Fleas may transmit other diseases such as tularemia, endemic typhus, and brucellosis. They are intermediate hosts for cat and dog tapeworms. 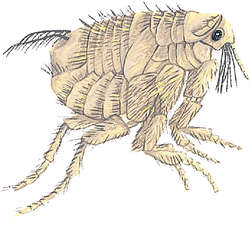 Feedback
Flashcards & Bookmarks ?
Please log in or register to use Flashcards and Bookmarks. You can also log in with
Flashcards ?
My bookmarks ?
+ Add current page to bookmarks
Mentioned in ?
References in periodicals archive ?
* Treat all the pets in the house--despite their name, cat fleas infest different animals
Your Role as Flea Fighter: The tiny cat flea can put up a big battle
Meola, "Toxicity and Histopathology of the Growth Regulator Pyriproxyfen to Adults and Eggs of the Cat Flea (Siphonaptera: Pulicidae)," Journal of Medical Entomology, vol.
Virulence of Aerial Conidia of Beauveria bassiana Produced under LED Light to Ctenocephalides felis (Cat Flea)
typhi in the cytoplasm of midgut cells in cat fleas obtained from El Labs, a biological laboratory supply company in Soquel, California.
Recognizing reemerging and recently described rickettsial infections in the United States
SAN FRANCISCO -- Eradicating cat fleas with one of the newer antiflea treatments is probably a highly effective way to prevent cat-scratch disease, according to Dr.
Flea Elimination May Curb Cat Scratch Disease
Cat fleas, for example, turn up on cats, dogs, rats, squirrels, rabbits, chickens, and humans.
Flea bites
Some dog and cat flea treatments, particularly those bought from pet shops or supermarkets, contain a chemical called permethrin.
Pet SOS
At first, I thought I had been bitten by a cat flea but my wife Maria inspected the damage and said, "That looks like shingles."
I thought Shingles was in Abersoch ..
The master of the high jump would be the cat flea which is capable of jumping 130 times its own height - a huge 34cm.
Your questions answered
The most common flea in this country is the cat flea, Ctenocephalides felis.
RECORD PETS; Fighting back against fleas
(Do not put borax on a dog.) In the meantime, I dusted the dogs with a 2% rotenone dust (used for cat flea powder or as garden insecticide).
Natural ingredients can be powerful
Although high temperatures and humidity are most favorable to the cat flea from June to August, it breeds in the U.S.
Indoor cats aren't safe from flea bites: their saliva contains 20 potential allergens
Studies on the growth of Bartonella henselae in the cat flea (Siphonaptera: Pulicidae).
Bats as reservoir hosts of human bacterial pathogen, Bartonella mayotimonensis