[kahr´pus]
the joint between the arm and hand, made up of eight bones; the wrist. 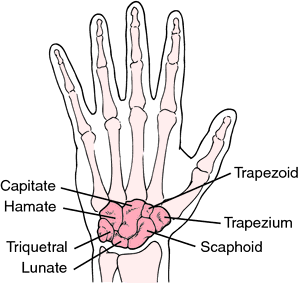 Carpus, viewed from the dorsal aspect. The eighth bone, the pisiform, is palmar to the triquetral bone. From Dorland's, 2000.
(See also table of bones.)
Miller-Keane Encyclopedia and Dictionary of Medicine, Nursing, and Allied Health, Seventh Edition. © 2003 by Saunders, an imprint of Elsevier, Inc. All rights reserved.

(kahr'păl bōnz) [TA]
Eight bones arranged in two rows that articulate proximally with the radius and indirectly with the ulna, and distally with the five metacarpal bones.
Synonym(s): carpus (2) [TA] .

The wrist or the bones of the wrist.
Collins Dictionary of Medicine © Robert M. Youngson 2004, 2005

that part of the forelimb of TETRAPODS which contains the CARPALS.
Collins Dictionary of Biology, 3rd ed. © W. G. Hale, V. A. Saunders, J. P. Margham 2005

Feedback
Flashcards & Bookmarks ?
Please log in or register to use Flashcards and Bookmarks. You can also log in with
Flashcards ?
My bookmarks ?
+ Add current page to bookmarks
Mentioned in ?
References in periodicals archive ?
For measurement of the carpus, the body of the plastic goniometer was positioned over the joint and the arms were aligned with the distal diaphysis of the ulna and the mid-diaphysis of the major metacarpal bone (Fig 1).
Each sensor end block was positioned overlying and parallel with the distal diaphysis of the ulna and the mid-diaphysis of the major metacarpal bone for measurement of the carpus; and overlying and parallel with the distal diaphysis of the humerus and proximal diaphysis of the ulna for measurement of the elbow (Fig 2).
Evaluation of Goniometry and Electrogoniometry of Carpus and Elbow Joints in the Barred Owl (Strix varia)
PALMAR SURFACE: In the palmar region, with the carpus flexed and the transducer positioned transversely, the palmar intercarpal ligament (PIL) is observed superficially and just below the skin.
Didatic approach of ultrasonographic examination for evaluation of the carpal joint in horses/Abordagem didatica do exame ultrassonografico da articulacao do carpo em equinos
Basis shorter than carpus and propodus combined, l/w ratio 4.6, with 1 dorsoproximal simple and 1 setulated seta.
A new polymorphic species of Leptochelia (Crustacea: Tanaidacea) from Guinea Bissau, West Africa, with comments on genetic variation within Leptochelia
The outcome of an orthopaedic consultation and a comprehensive examination localized the pain to the radial aspect of the distal carpus; no pain was elicited on palpation of the metacarpal shafts or bases, or distal radius or ulna.
Isolated trapezoid fractures: a case report with compilation of the literature
Autotransplantation of fourth walking leg tissues (dactyl + ischium + merus/ carpus joint) regenerated one complete walking leg [ILLUSTRATION FOR FIGURE 2I OMITTED] and three incomplete walking legs that contained only distal segments (dactyl or dactyl + manus) of the fourth walking leg.
Limb regeneration in the eye sockets of crabs
The lateral radiographic image (Figs 1 and 2) revealed a soft tissue swelling around the left carpus and the radiolucency noted, consistent with a nondisplaced oblique fracture of the extensor process of the carpometacarpus.
What is your diagnosis?
In the proximal part of the styloid process to cranial a parastyloid process is projected, the articular disc for the carpus is attached to it and it fixes with the radius.
Anatomic Description of the Ulna of the White-Footed Tamarin (Saguinus leucopus Gunther, 1876)/ Descripcion Anatomica de la Ulna del Titi Gris (Saguinus leucopus Gunther, 1876)
Entre os animais portadores de DA, 66,9% apresentaram carpus valgus e 23,1% carpus varus, sendo que todos os muares apresentavam o mesmo tipo de DA em ambos os membros.
Acquired carpal angular limb deformities in mules: diagnosis, incidence and treatment/Deformidade angular adquirida no carpo de muares: diagnostico, incidencia e tratamento
The cause of hyperextension injury is typically a single traumatic event or repeated hyperextension of the carpus. Jumping off an elevated surface (out windows, off a roof, out of a pick-up truck, off a deck etc) or hitting the wrist against a solid surface (such as in fly ball) are the primary causes of this injury.
Surgical and physiotherapeutic management of ankylozed knee in a dog
The dorsal carpal ligament formed by the fibrous layer of the joint capsule and represented extensor retinaculum surrounded the extensor tendon on the dorsal aspect of the carpus which blends on each side with the collateral ligaments (Fig.
The Carpal Joint of the Donkey (Equus asinus): Morphological Investigation/Articulacion del Carpo del Asno (Equus asinus): Investigacion Morfologica