[leg]
1. that section of the lower limb between the knee and ankle; called also crus.
2. in common usage, the entire lower limb (in which case, the part below the knee is called the lower leg).
3. any of the four limbs of a quadruped.
bayonet leg ankylosis of the knee after backward displacement of the tibia and fibula.
bow leg see bowleg.
milk leg phlegmasia alba dolens.
restless l's restless legs syndrome.

(leg),
1. The segment of the inferior limb between the knee and the ankle.
2. A structure resembling a leg.
3. Colloquially, the entire inferior limb.
Synonym(s): crus (1) [TA]

(lĕg)
n.
1.
a. One of the limbs or appendages that an animal uses for locomotion or support.
b. One of the lower or hind limbs in humans and other primates.
c. The part of the limb between the knee and foot in vertebrates.
d. The back part of the hindquarter of a meat animal.
2. A supporting part resembling a leg in shape or function.

(leg)
1. The segment of the inferior limb between the knee and the ankle; commonly used to mean the entire inferior limb.
2. A structure resembling a leg.
Synonym(s): crus (1) [TA] . 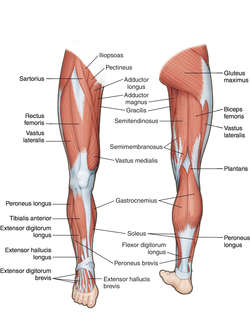 MUSCLES OF THE LEG: Anterior view

MUSCLES OF THE LEG: Anterior view
In common usage, the entire lower limb, or from hip to ankle; anatomically, only the lower leg, from knee to ankle, the tibia and fibula. See: illustration

Elephantiasis of the legs.

An uncorrected posterior displacement of the knee bones, followed by ankylosis at the joint.

(leg)
1. [TA] Segment of inferior limb between knee and ankle.
2. A structure resembling a leg.
3. Colloquially, the entire inferior limb.

Q. HOW CAN YOU STOP LEAKING LEGS CAUSED BY EDEOMA AND WHAT CAN WE USE TO COVER THE LEG TO STOP HIS TROUSERS RUBBI MY SON IS VERY OVER WEIGHT AND HAS VERY BAD LEGS WHICH LEAK WATER ALL DAY HE IS A TAXI DRIVER WITH HIS OWN BUSSINESS HE TAKES ANTIBIOTICS TO STOP INFECTIONS BUT FINDS HIS LEGS GET SOCKED WHAT DRESSING COULD HE USE

A. from your question it seems to me that your son needs to take care of his problem,what does his DR say? wrapping his legs up my not be the right answer,because that fluid has to go somewhere? antibiotics are good,but sooner or later infection can take over,once his body adjust to them,in other words he cannot take them forever.right now trying to cover up the symtoms of his problems is not the right thing to do. OBESITY,is what your sons diag is the complications of obesity are;hypertension(high blood pressure)--stokes are twice as likely to accur in obese people. coronary heart disease is more common,particularly in obese men,under the age of 40yrs. diabetes mellitus,increased rick of cancer of the colon,rectum cancer,prostrate cancer joint and arthritis problems,that are agrravated by obesity.(hips)(knees)(back).some people who have been seriously obese for much of there lives can lose weight without regaining it. as when trying to give up smoking or alcohol,the essential elem

Q. How to prevent leg cramps? Every night I get terrible leg cramps that wake me up from my sleep. This only started happening during my pregnancy. How can I stop it from happening?

A. You can try to prevent night cramps by wearing socks to bed or by pressing your foot against the bed board. If the painful cramps continue, ask your doctor about calcium or magnesium supplements as they can sometimes help.

Q. Why do you have to amputate legs in Diabetic patients? And how can I avoid that? I’ll appreciate an honest answer.

A. Here is a very detailed information about that, it has even some videos that gives an idea about how it happens:
http://yourtotalhealth.ivillage.com/foot-leg-amputation-diabetes.html
there’s a link there to prevention too.
More discussions about leg

Feedback
Flashcards & Bookmarks ?
Please log in or register to use Flashcards and Bookmarks. You can also log in with
Flashcards ?
My bookmarks ?
+ Add current page to bookmarks
TheFreeDictionary presents:
Write what you mean clearly and correctly.
Mentioned in ?
References in periodicals archive ?
If children do not outgrow knock knees or bow legs, it can affect the child's activity level, which is why parents should keep an eye on the progress of each condition."
Common orthopaedic conditions in children are part of growth
There was a total of 24 cases, which included 11 babies aged between one year and 18 months who had bow legs.
Victorian slum disease rickets reappears in Midland children
Garrincha had bow legs, a legacy of childhood polio, but used his ungainly appearance and pace to exciting effect to outwit opposing defenders.
WORLD CUP CLASSICS; The Little Bird just wouldn't be grounded
RICKETS, the childhood disease which causes bow legs and soft bones, is back on the increase in Britain.
Warning over rickets
The bandy bandit was caught out when security film of raids on jewellery shops showed his bow legs.
Bandy bandit walked into trouble on video
Rickets stunts growth and produces bow legs. It's caused by chronic lack of vitamin D and lack of exposure to sunlight, and all but died out in the welfare state.
MORE SUN AND GAMES
A study has found that nearly 20 per cent of youngsters are at risk of developing bow legs and other bone problems simply because they don't get enough sunlight.
HOME KIDS IN RICKETS ALERT
ANGELA REPLIES: Bow legs are so common in children starting to walk that it is usually regarded as normal.
ASK ANGELA; THE AGONY AUNT WITH A HEART