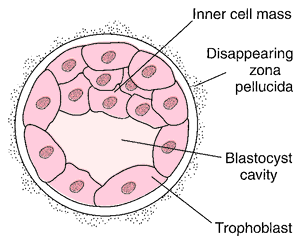 Feedback
Flashcards & Bookmarks ?
Please log in or register to use Flashcards and Bookmarks. You can also log in with
Flashcards ?
My bookmarks ?
+ Add current page to bookmarks
Mentioned in ?
References in periodicals archive ?
All of the embryos were cultured until the blastocyst stage (Figure 1).
The Frequency of Chromosomal Euploidy Among 3PN Embryos
Researchers take blastocysts, the clusters of cells formed several days after egg fertilization, from mutant animals missing specific organs and inject them with stem cells from a normal donor, not necessarily of the same species.
Researchers Close In On Made-To-Order Human Kidneys
PGS can be used to screen embryo biopsies for aneuploidy before transplantation, and thus promote better pregnancy outcomes from IVF therapy.[14],[15] While embryo biopsies can be performed at the zygote (via the removal of 1-2 polar bodies), cleavage (via the removal of 1-2 blastomeres from a 6-8-cell embryo), and/or blastocyst (via the removal of 5-10 TE cells) stage of development,[16] PGS is currently predominantly conducted using blastocysts, since they exhibit both a low-mosaic rate and high developmental potential, and facilitate ICM evaluation.[17],[18] Specific indications for PGS include infertility at an advanced maternal age (>35 years), previous unsuccessful IVF treatments (i.e.
Overall Blastocyst Quality, Trophectoderm Grade, and Inner Cell Mass Grade Predict Pregnancy Outcome in Euploid Blastocyst Transfer Cycles
Table II.- Effect of sheep follicular fluid on maturation rate, cleavage rate and blastocyst rate of sheep embryos.
Effects of Follicular Fluid on Developmental Competence and Gene Expression of in vitro Fertilized Sheep Embryos
The diameter of each blastocyst was measured using a lens micrometer attached to an inverted light microscope (x320).
Low incubation temperature successfully supports the in vitro bovine oocyte maturation and subsequent development of embryos
The results of the present study showed that freezing reduces the expression of EGFR in both 2-cell and blastocyst experiment groups.
Assessment of EGFR Gene Expression Following Vitrification of 2-cell and Blastocyst Mouse Embryos
The implementation of this innovative strategy, which is a simultaneous transfer of two embryos at different developmental stages, combines the advantages of blastocyst and cleavage stage transfer [20].
Successful Pregnancy following Mixed Double Embryo Transfer in a Patient with Variable Window of Implantation
(2007) showed that parylene coating of microfluidic systems made of PDMS, which made the coating pinhole free, suppressed the increase of osmolality of the culture medium, and significantly improved blastocyst development of mouse embryos compared to the identical system with no parylene [8].
In Vitro Culture of Single Bovine Embryos with Microwell Plates Made of Poly(dimethylsiloxane) Cured under Low Pressure
EPSCs are the first that can produce all three types of blastocyst stem cells, which gives them much greater potential for development.
Research, Therapies Could Benefit From New Type Of Stem Cell line
Considering the complete automatization of the process, it takes 24h for the full procedure, meaning that the biopsy can be done on the third cultivation day and blastocyst embryo transfer can be performed on the fifth cultivation day without cryopreservation required [16].
DETECTION OF HUMAN EMBRYO ANEUPLOIDY IN THE PROCEDURE OF IN VITRO FERTILIZATION AFTER PREIMPLANTATION GENETIC SCREENING USING ARRAY COMPARATIVE GENOMIC HYBRIDIZATION/DETEKCIJA ANEUPLOIDIJA U HUMANIM EMBRIONIMA U POSTUPKU IN VITRO FERTILIZACIJE NAKON PREIPLANTACIONOG GENETICKOG SKRININGA ARRAY KOMPARATIVNOM GENOMSKOM HIBRIDIZACIJOM
Keywords: Blastocyst, embryo transfer, in vitro fertilization, intracytoplasmic sperm injection
Day 3 embryo transfer versus day 5 blastocyst transfers: A prospective randomized controlled trial/Ucuncu gun embriyo transferlerinin 5. gun blastokist transferleriyle karsilastirilmasi: Prospektif, randomize, kontrollu bir calisma