[mel″ah-no´mah]
a tumor arising from the melanocytic system of the skin and other organs. When used alone, the term refers to malignant melanoma.
acral-lentiginous melanoma an uncommon type of melanoma, although it is the most common type seen in nonwhite individuals, occurring chiefly on the palms and soles, and sometimes involving mucosal surfaces, such as the vulva or vagina. The characteristic lesion is an irregular, enlarging black macule, which has a prolonged noninvasive stage.
juvenile melanoma spindle and epithelioid cell nevus.
lenti´go malig´na melanoma a cutaneous malignant melanoma found most often on the sun-exposed areas of the skin, especially the face. It begins as a circumscribed macular patch of mottled pigmentation, showing shades of dark brown, tan, or black (lentigo maligna or melanotic freckle of Hutchinson), and enlarges by lateral growth before dermal invasion occurs. This type seems to be the least aggressive form of malignant melanoma.
malignant melanoma a malignant skin tumor, usually developing from a nevus and consisting of dark masses of cells with a marked tendency to metastasis. It is not common, but its incidence is increasing and it is the most aggressive type of skin cancer. It arises from pigment- (melanin-) producing cells and varies in course and prognosis according to type; types include superficial spreading melanoma, nodular malignant melanoma, and lentigo maligna melanoma. In general, the superficial lesions can be cured by surgical excision of the mole and adjacent tissues. Deeper lesions tend to metastasize rapidly through the lymphatic and circulatory systems. In some cases the condition has a genetic component. Early detection and skin protection are key in its control.
Miller-Keane Encyclopedia and Dictionary of Medicine, Nursing, and Allied Health, Seventh Edition. © 2003 by Saunders, an imprint of Elsevier, Inc. All rights reserved.

(mel'ă-nō'mă), Avoid the redundant phrase malignant melanoma.
A malignant neoplasm, derived from cells that are capable of forming melanin, arising most commonly in the skin of any part of the body, or in the eye, and, rarely, in the mucous membranes of the genitalia, anus, oral cavity, or other sites; occurs mostly in adults and may originate de novo or from a pigmented nevus or lentigo maligna. In the early phases, the cutaneous form is characterized by proliferation of cells at the dermal-epidermal junction, that soon invade adjacent tissues. The cells vary in amount and pigmentation of cytoplasm; the nuclei are relatively large and frequently bizarre in shape, with prominent acidophilic nucleoli; mitotic figures tend to be numerous. Prognosis correlates with the depth of skin invasion. Melanomas frequently metastasize widely; regional lymph nodes, skin, liver, lungs, and brain are likely to be involved. Intense, intermittent sun exposure, especially of fair-skinned children, increases the risk of melanoma later in life.
Synonym(s): malignant melanoma
[melano- + G. -ōma, tumor]
Farlex Partner Medical Dictionary © Farlex 2012

Amelanotic melanoma
Rare, poorly differentiated, and occurs in those with a previous pigmented melanoma; since the Fontana-Masson stain is rarely positive in amelanotic melanoma, special studies are necessary, including immunoperoxidase staining with antibodies to the S-100 antigen and ultrastructural examination for presence of premelanosomes.

Superficial spreading melanoma
70% of cases; affects ages 30 to 60, especially female in lower legs or trunk, as a flat lesion (radial growth phase) that may be present for months to years; average 5-year survival 75%; aetiologically linked to recreational actinic exposure.

(mel'ă-nō'mă)
A malignant neoplasm, derived from cells that are capable of forming melanin, arising most commonly in the skin or in the eye, and, rarely, in the mucous membranes of the genitalia, anus, oral cavity, or other sites; occurs mostly in adults and may originate de novo or from a pigmented nevus or lentigo maligna. Melanomas frequently metastasize widely; regional lymph nodes, skin, liver, lungs, and brain are likely to be involved.
Medical Dictionary for the Health Professions and Nursing © Farlex 2012 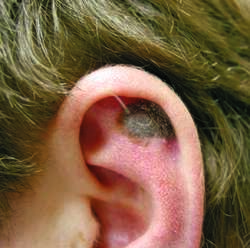 MELANOMA
A malignant tumor of darkly pigmented cells (melanocytes) that often arises in a brown or black mole. The tumor can spread aggressively throughout the body (e.g., to the brain and other internal organs). The incidence of the disease is rising rapidly in the US, esp. among people over 60. In 2008, the American Cancer Society estimated that 62,480 Americans would be diagnosed with melanoma and that more than 8,400 would die from the disease. More than 90% of melanomas develop on the skin; about 5% occur in the eye, and 2.5% occur on mucous membranes. See: illustration

The likelihood of long-term survival depends on the depth of the lesion (thicker lesions are more hazardous), whether it is ulcerated, the histological type (nodular and acral lentiginous melanomas are more dangerous than superficial spreading or lentigo malignant melanomas), the patient's age (older patients do more poorly), and gender (men tend to have a worse prognosis than women). See: ABCD; skin cancer

Excessive exposure to ultraviolet light, esp. sunlight, contributes to the development of melanoma, as does a family history of the disease. It is more common in fair-skinned than dark-skinned people and more common in people who have many moles on the skin than in those who have few. Total body skin examinations should be performed periodically on high-risk patients. On average, consistent screening identifies melanomas at an earlier stage (when they are thinner, or localized, rather than after they have spread) than those found on routine examination.

People spending considerable time outside should wear protective clothing to shield against ultraviolet radiation and use sunscreens (at least SPF15) on exposed skin.

Common melanoma sites are the back, shoulders, head and neck (men), the legs (women), and the backs. A skin biopsy and histologic examination can distinguish malignant melanoma from a benign nevus, seborrheic keratosis, or pigmented basal cell epithelioma; it also determines tumor thickness and tumor stage. Staging is based on the TNM system and Clark’s levels system, which classifies tumor progression according to skin layer penetration. Once diagnosed, patients need physical, psychological, and social assessment and care. Treatment options should be explained.

Melanomas are treated with surgery to remove the primary cancer and adjuvant therapies (chemotherapy and biotherapy) to reduce the risk of metastasis. Closure of a wide resection around an excised tumor may require skin grafting. Vaccines have been developed against melanoma; they appear to improve prognosis in affected patients.

After surgery, dressings are inspected for drainage and signs of infection, and the patient is taught about prevention and signs to report. The patient should be taught that close follow-up care will be needed to detect recurrences at an early stage, and that this must continue for years (13% of recurrences develop more than 5 yrs after the primary lesion). When therapy fails, the patient and family will need referrals for palliative (hospice) care and may also require social services and spiritual care. 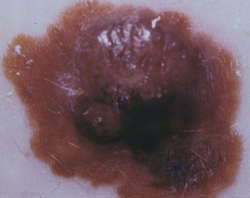 A rare type of malignant melanoma in which the typical melanotic pigmentation may be absent. It often occurs on the head or neck. Microscopically, the tumor cells are spindle-shaped. Local recurrences after surgical excision are common, as are metastases, esp. to the lungs.
illustration

A superficial melanoma that has not yet invaded deep layers of the skin or spread to local or distant tissues.

The lesion should be removed by an experienced surgeon.

Patients diagnosed with melanoma in situ need careful follow-up examinations in case the tumor recurs, spreads, or is associated with other skin cancers.

The most dangerous form of skin cancer. It should not be treated with cryotherapy, but should be removed surgically instead.
Mentioned in: Cryotherapy, Sunscreens
Gale Encyclopedia of Medicine. Copyright 2008 The Gale Group, Inc. All rights reserved.

Tumour derived from cells that are capable of forming melanin.
choroidal melanoma The most common primary malignant tumour in the eye in adults. It appears under ophthalmoscopic examination as a pigmented, elevated mass, usually brown in colour and sometimes with orange pigment (lipofuscin). The tumour may cause a decrease in vision or brief 'balls of light' moving cross the visual field, or be asymptomatic, depending on its size or location. The condition is typically unilateral. Differential diagnosis with retinal detachment or choroidal naevus is essential. Treatment may include radiotherapy or photocoagulation, or enucleation if the melanoma is large and vision irreversibly lost. Syn. malignant melanoma of the choroid.
iris melanoma A pigmented lesion, which is easily seen on the surface of the iris. It alters the colour of the iris and may distort the shape of the pupil. A dilated episcleral vessel running towards the tumour may be present. There may be a localized cataract where the tumour is in contact with the lens and secondary glaucoma may develop if the tumour has spread to the angle of the anterior chamber. The tumour arises from the iris stroma and is composed of epitheloid or spindle cells, or a mixture of both. It is almost always unilateral and most commonly found in white patients with light irides. It is thought to originate from a previous pigmented naevus. If the tumour is found to enlarge it will usually be excised surgically. (Fig. M7) See iris naevus.
uveal melanoma Tumour which may be located in the choroid, the ciliary body or the iris. Choroidal melanomas make up about 85% of the total, ciliary body about 10% and iris about 5%. Although uveal melanomas can occur at any age, the majority of patients are beyond the age of 40 years. Uveal melanomas can metastasize, especially choroidal melanomas. Diagnosis is best achieved with a B-scan ultrasound examination. The patient must be referred to an ocular oncologist without delay. See ultrasonography.

(mel'ă-nō'mă)
Malignant neoplasm, derived from cells capable of forming melanin, arising in skin of any part of the body, or in the eye, and, rarely, in mucous membranes of the genitalia, anus, oral cavity, or other sites.
Medical Dictionary for the Dental Professions © Farlex 2012