[bath]
1. a medium, e.g., water, vapor, sand, or mud, with which the body is washed or in which the body is wholly or partially immersed for therapeutic or cleansing purposes; application of such a medium to the body.
2. the equipment or apparatus in which a body or object may be immersed.
bed bath the cleansing of a patient in bed. A complete bed bath indicates that someone must totally wash a patient, as is done with an unconscious patient. A partial bed bath is one in which the patient is not totally dependent but is given a basin, soap, and water, as well as any assistance needed to maintain good hygiene.
bath blanket a flannel covering used to prevent chilling when administering a bed bath.
colloid bath a medicated bath prepared by adding soothing agents to the bath water such as gelatin, starch, or bran in order to relieve skin irritation and itching. The patient is dried by patting rather than rubbing the skin. Care must be taken to avoid chilling.
contrast bath alternate immersion of a part in hot water and cold water.
cool bath one in water from 18° to 24°C (65° to 75°F).
emollient bath a bath in a soothing and softening liquid, used in various skin disorders.
lukewarm bath warm bath.
oatmeal bath a colloid bath containing oatmeal, used for treatment of dermatoses to soothe the skin and relieve itching.
paraffin bath the dipping of a limb into a warm solution of paraffin, or the brushing of paraffin onto the skin, to provide pain relief and increase mobility.
sitz bath immersion of only the hips and buttocks, done to relieve pain and discomfort following rectal surgery, cystoscopy, or vaginal surgery; sitz baths also may be ordered for patients with cystitis or infections in the pelvic cavity. Temperature for a hot sitz bath is started at 35°C (95°F) and gradually increased to 40 to 43°C (104° to 110°F). The patient must be watched for fatigue and faintness, and an attendant must remain within calling distance. Cool compresses to the head or cool drinks during the bath promote comfort and relieve faintness. 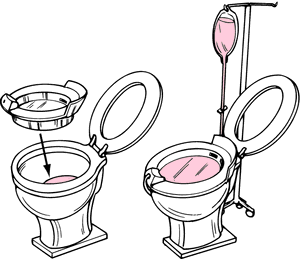 Disposable sitz bath. From Lammon et al., 1995.
sponge bath one in which the patient's body is not immersed but is wiped with a wet cloth or sponge; this is most often done for reduction of body temperature in presence of fever, in which case the water used is cool.
tepid bath one in water 24° to 33°C (75° to 92°F).
warm bath one in water just under body temperature, 33° to 37°C (92° to 98°F).
whirlpool bath one in which the water is kept in constant motion by mechanical means and has a massaging action that can promote improved circulation and relaxation; often used in the treatment of soft tissue injuries and management of open wounds such as burns.

(bath),
1. Immersion of the body or any of its parts in water or any other yielding or fluid medium, or application of such medium in any form to the body or any of its parts.
2. Apparatus used in giving a bath of any form, qualified according to the medium used, the temperature of the medium, the form in which the medium is applied, the medicament added to the medium, or according to the part bathed.
3. Fluid used for maintenance of metabolic activities or growth of living organisms, for example, cells derived from body tissue.
[A.S. baeth]

Alternative
A general term for the immersion of the body in water and varying other substances at various temperatures for varying periods of time.

Vox populi
(1) An exposure or immersion the body or body parts to water or vapour for cleanliness, comfort or health. For examples: cold or hot bath; medicated bath; steam bath; hip bath; to take a bath.
(2) A place or container wherein a person immerses him or herself in water, as in a bathtub.
(3) A building containing a suite/suites for bathing, as in a bathhouse.

(bath)
1. Immersion of the body or any of its parts in water or any other yielding or fluid medium, or application of such medium in any form to the body or any of its parts. May be used for cleansing or therapy.
2. Apparatus used in giving a bath of any form.
3. Fluid used for maintenance of metabolic activities or growth of living organisms, e.g., cells derived from body tissue.
[A.S. baeth]

Feedback
Flashcards & Bookmarks ?
Please log in or register to use Flashcards and Bookmarks. You can also log in with
Flashcards ?
My bookmarks ?
+ Add current page to bookmarks
TheFreeDictionary presents:
Write what you mean clearly and correctly.
Mentioned in ?
References in classic literature ?
This satisfied the parish officers presently, and I lay in with as much credit as I could have done if I had really been my Lady Cleve, and was assisted in my travail by three or four of the best citizens' wives of Bath who lived in the neighbourhood, which, however, made me a little the more expensive to him.
I was brought to bed of a fine boy indeed, and a charming child it was; and when he heard of it he wrote me a very kind, obliging letter about it, and then told me, he thought it would look better for me to come away for London as soon as I was up and well; that he had provided apartments for me at Hammersmith, as if I came thither only from London; and that after a little while I should go back to the Bath, and he would go with me.
This letter forced an answer from him, by which, though I found I was to be abandoned, yet I found he had sent a letter to me some time before, desiring me to go down to the Bath again.
I found it so here, though good manners and justice in this gentleman kept him from carrying it on to any extreme but the short history of his part in this affair was thus: he perceived by my last letter, and by all the rest, which he went for after, that I was not gone to Bath, that his first letter had not come to my hand; upon which he write me this following:--
I wish you would think of going back to the Bath. I enclose you here a bill for #50 for clearing yourself at your lodgings, and carrying you down, and hope it will be no surprise to you to add, that on this account only, and not for any offence given me on your side, I can see you no more.
Under these reflections I continued very pensive and sad for near month, and did not go down to the Bath, having no inclination to be with the woman whom I was with before; lest, as I thought, she should prompt me to some wicked course of life again, as she had done; and besides, I was very loth she should know I was cast off as above.
I sent my gentleman a short letter, therefore, that I had obeyed his orders in all things but that of going back to the Bath, which I could not think of for many reasons; that however parting from him was a wound to me that I could never recover, yet that I was fully satisfied his reflections were just, and would be very far from desiring to obstruct his reformation or repentance.
View in context
"Bath is a charming place, sir; there are so many good shops here.
View in context
PS15, www.made.com BEACH HUT BATH MAT: The cute beach hut bath mat absorbs up to four times its own weight in water and dries super fast.
Top 10 BATH MATS; Take-a-break LIFESTYLE, PUZZLES, BRAINTEASERS, STARS & CARTOONS
[USPRwire, Mon Aug 26 2019] The use of bath and shower toiletries forms a crucial part of body hygiene and hair care.
Bath & Shower Toiletries Market Key Facts and Forecast Predictions Presented Until 2022
[ClickPress, Tue Aug 27 2019] The use of bath and shower toiletries forms a crucial part of body hygiene and hair care.
Bath & Shower Toiletries Market Key Facts and Forecast Predictions Presented Until 2022
Baby baths are a crucial piece of equipment every parent should invest in to ease some of the stress and to ensure bath times are fun again.
Best baby bathtubs 2019 suitable for newborns and older babies; Rub a dub dub - it's time to find a suitable baby tub! Some of them fold, some tell us the temperature, find the right one for your baby here