[kath´ĕ-ter]
a tubular, flexible instrument, passed through body channels for withdrawal of fluids from (or introduction of fluids into) a body cavity. 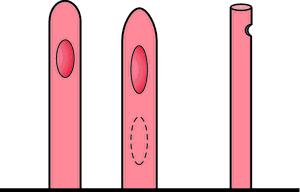 Straight catheters. May have one or two eyes, a round tip, or a “whistle” tip. These catheters are not self-retaining.
acorn-tipped catheter one used in ureteropyelography to occlude the ureteral orifice and prevent backflow from the ureter during and following the injection of an opaque medium.
Amplatz coronary catheter a J-shaped angiographic catheter used as an alternative to a Judkins coronary catheter in coronary arteriography.
angiographic catheter one through which a contrast medium is injected for visualization of the vascular system of an organ. Such catheters may have preformed ends to facilitate selective locating (as in a renal or coronary vessel) from a remote entry site. They may be named according to the site of entry and destination, such as femoral-renal and brachial-coronary.
arterial catheter one inserted into an artery, used as part of a catheter-transducer-monitor system to continuously observe the blood pressure of critically ill patients. An arterial catheter also may be inserted for x-ray studies of the arterial system and for delivery of chemotherapeutic agents directly into the arterial supply of malignant tumors.
atherectomy catheter a catheter containing a rotating cutter and a collecting chamber for debris, used for atherectomy and endarterectomy; it is inserted percutaneously under radiographic guidance.
balloon catheter (balloon-tip catheter) a catheter with a balloon at the tip that may be inflated or deflated while the catheter is in place to create, enlarge, or occlude a passageway; see also balloon angioplasty. The pressure-sensitive balloon may be used to facilitate hemodynamic monitoring.
Braasch bulb catheter a bulb-tipped ureteral catheter used for dilation and determination of the inner diameter of the ureter.
Brockenbrough transseptal catheter a specialized cardiac catheter with a curved steel inner needle that can puncture the interatrial septum; used to catheterize the left ventricle when the aortic valve cannot be crossed in a retrograde approach.
Broviac catheter a central venous catheter similar to the Hickman catheter but with a smaller lumen.
cardiac catheter a long, fine catheter especially designed for passage into the chambers of the heart, usually through a peripheral blood vessel under fluoroscopic control. See also cardiac catheterization.
Castillo catheter a cardiac catheter similar to an Amplatz coronary catheter in shape and use, but shorter and introduced via the brachial artery.
central venous catheter a long, fine catheter inserted via a large vein into the superior vena cava or right atrium to administer parenteral fluids (as in parenteral nutrition), antibiotics, or other therapeutic agents; it can also be used for measurement of central venous pressure and for temporary hemodialysis. See also central venous catheterization.
condom catheter an external urinary collection device that fits over the penis like a condom; used in the management of urinary incontinence.
conical catheter a ureteral catheter that has a cone-shaped tip designed to dilate the lumen.
Cournand catheter a cardiac catheter with a single end hole; used for pressure measurement, usually in the right heart.
DeLee catheter a catheter used to suction meconium and amniotic debris from the nasopharynx and oropharynx of neonates.
de Pezzer catheter a self-retaining urethral catheter with a bulbous end.
directional atherectomy catheter a type of atherectomy catheter whose direction can be shifted to shave off additional plaque.
double-channel catheter (double-lumen catheter) (dual-lumen catheter) a catheter with two channels, one for injection and the other for removal of fluids; called also two-way catheter.
elbowed catheter a catheter bent at an angle near the beak, used in cases of enlarged prostate. Called also prostatic catheter.
electrode catheter a cardiac catheter containing one or more electrodes; it may be used to pace the heart or to deliver high-energy shocks.
end-hole catheter a cardiac catheter with a hole in the tip, through which a guidewire may be passed or pressure monitored.
eustachian catheter one for inflating the eustachian tube.
female catheter a short urethral catheter for passage through the female urethra.
femoral catheter a central venous catheter inserted through the femoral vein.
fluid-filled catheter an intravascular catheter connected by a saline-filled tube to an external pressure transducer; used to measure intravascular pressure.
Fogarty catheter a type of balloon-tip catheter used to remove thrombi and emboli from blood vessels.
Foley catheter an indwelling catheter retained in the bladder by a balloon inflated with air or liquid; see illustration. 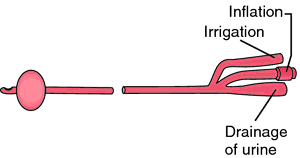 Three-way Foley catheter. Three separate lumens are incorporated within the round shaft of the catheter for drainage of urine, inflation, and introduction of irrigating solutions into the bladder.
Gensini coronary catheter a catheter used for coronary arteriography, having an end-hole to accommodate a guidewire or monitor pressure as well as side holes for rapid injection of large volumes of contrast material.
Groshong catheter a single or double lumen cardiac catheter inserted into the right atrium with an external port. Unlike the Hickman and Broviac catheters, this type has a valve at the distal end, eliminating the need for clamping and preventing blood from entering it when not in use.
Gruentzig balloon catheter a flexible balloon catheter with a short guidewire fixed to the tip, used for dilation of arterial stenoses; the balloon is made of low-compliance plastic to reduce the risk of arterial rupture.
hemodialysis catheter a catheter used on a temporary basis for vascular access for hemodialysis; usually some type of central venous catheter.
Hickman catheter a type of central venous catheter used for long term administration of substances via the venous system, such as antibiotics, total parenteral nutrition, or chemotherapeutic agents; it can be used for continuous or intermittent administration and may have either a single or a double lumen.
indwelling catheter a urethral catheter designed to be held in place to drain urine from the bladder.
internal jugular catheter a central venous catheter inserted through the internal jugular vein.
Judkins coronary catheter a preformed J-shaped angiographic catheter used in coronary arteriography to cannulate and deliver contrast material to one of the coronary arteries via a percutaneous femoral route.
left coronary catheter one designed for coronary arteriography of the left coronary artery.
Malecot catheter
1. a two- or four-winged female catheter.
2. a tube with an expanded tip that is used for gastrostomy feedings.
manometer-tipped catheter one with a small pressure transducer on its tip; used in measuring intravascular or intracardiac pressure.
multipurpose catheter
1. a catheter with several functions or applications.
2. a catheter for coronary angiography that is shaped so that it can be used in either coronary artery.
nasal catheter one made of flexible rubber or plastic with several holes near the end; used for the administration of oxygen. Called also oropharyngeal catheter.
NIH catheter one used for coronary arteriography; it has a closed end and several side holes for rapid injection of large volumes of contrast material.
olive-tip catheter a ureteral catheter with an olive-shaped end, used to dilate a constricted ureteral orifice; larger sizes are also used for dilating or calibrating the diameter of urethral strictures.
oropharyngeal catheter nasal catheter.
pacing catheter a cardiac catheter containing one or more electrodes on pacing wires; used as a temporary cardiac pacing lead.
Pezzer's catheter de Pezzer catheter.
pigtail catheter an angiographic catheter ending in a tightly curled tip that resembles the tail of a pig.
preformed catheter a preshaped catheter designed to require less operator manipulation but usually restricted to a single function.
prostatic catheter elbowed catheter.
right coronary catheter one designed for coronary arteriography of the right coronary artery.
Robinson catheter a straight urethral catheter with two to six openings to allow drainage, especially useful in the presence of blood clots which may occlude one or more openings.
self-retaining catheter a urethral catheter constructed to be retained in the bladder and urethra; see Foley catheter and indwelling catheter.
snare catheter one designed to remove intracardiac catheter fragments or pacing leads introduced iatrogenically.
Sones coronary catheter a woven Dacron or polyurethane catheter used in coronary arteriography to cannulate and deliver contrast material to the coronary arteries via the brachial artery.
subclavian catheter a central venous catheter inserted through the subclavian vein.
Swan-Ganz catheter see swan-ganz catheter.
Tenckhoff catheter a cuffed silicone catheter that is permanently inserted into the abdominal cavity for infusion of dialyzing solution in patients undergoing peritoneal dialysis.
Texas catheter trademark for a commercially made condom catheter.
thermodilution catheter a catheter used in thermodilution for introduction of the cold liquid indicator into the cardiovascular system.
toposcopic catheter a miniature catheter that can pass through narrow, tortuous vessels to convey chemotherapy directly to brain tumors.
tracheal catheter one with small holes at the end, especially designed for removal of secretions during tracheal suctioning.
transhepatic biliary catheter biliary c.
transluminal endarterectomy catheter a type of atherectomy catheter with a conical cutting window, inserted through the lumen of the vessel; debris is collected in a special vacuum bottle.
transtracheal catheter a catheter inserted into the trachea through a tracheostomy for patients who cannot tolerate an oral or nasal cannula.
two-way catheter double-lumen catheter.
ureteral catheter a long, small gauge catheter designed for insertion directly into a ureter, either through the urethra and bladder or posteriorly via the kidney.
urethral catheter any of various types of catheters designed for insertion via the urethra into the urinary bladder. See also catheterization.
whistle-tip catheter a urethral catheter with a terminal opening as well as a lateral one.
winged catheter a urethral catheter that has winglike projections on the end to retain it in the bladder.
Miller-Keane Encyclopedia and Dictionary of Medicine, Nursing, and Allied Health, Seventh Edition. © 2003 by Saunders, an imprint of Elsevier, Inc. All rights reserved.

a single- or double-lumen tube with a balloon at its tip that can be inflated or deflated without removal after installation; the balloon can be inflated to facilitate passage of the tube through a blood vessel (propelled by the bloodstream) or to occlude the vessel in which the tube alone would allow free flow; such catheters are used to enter the pulmonary artery to facilitate hemodynamic measurements.
See also: Swan-Ganz catheter.
Farlex Partner Medical Dictionary © Farlex 2012

(bă-lūn'tip kath'ĕ-tĕr)
1. A single- or double-lumen tube with a balloon at its tip that can be inflated or deflated without removal after installation; the balloon may be inflated to facilitate the passage of the tube through a blood vessel (propelled by the bloodstream) or to occlude the vessel in which the tube alone would allow free flow; such catheters are used to enter the pulmonary artery to facilitate hemodynamic measurements.
See also: Swan-Ganz catheter
2. A tube with an inflatable balloon at its tip used to enter arteries and then removed while inflated to withdraw clots (embolectomy catheter).
3. Synonym(s): Fogarty catheter.
Medical Dictionary for the Health Professions and Nursing © Farlex 2012

(bă-lūn'tip kath'ĕ-tĕr)
1. A single- or double-lumen tube with a balloon at its tip that can be inflated or deflated without removal after installation; the balloon may be inflated to facilitate the passage of the tube through a blood vessel (propelled by the bloodstream) or to occlude the vessel in which the tube alone would allow free flow; such catheters are used to enter the pulmonary artery to facilitate hemodynamic measurements.
See also: Swan-Ganz catheter
2. A tube with an inflatable balloon at its tip used to enter arteries and then removed while inflated to withdraw clots (embolectomy catheter)
3. Synonym(s): Fogarty catheter.
Medical Dictionary for the Dental Professions © Farlex 2012