[re″kom-bĭ-na´shun]
1. the reunion, in the same or different arrangement, of formerly united elements that have been separated.
2. in genetics, the process that creates new combinations of genes by shuffling the linear order of the DNA, such as occurs naturally by crossing over of homologous chromosomes during meiosis or of homologous DNA sequences in somatic cells during mitosis, or occurs in vitro when DNA or RNA is manipulated for genetic engineering.
bacterial recombination in bacterial genetics, the process of producing a new gene by any of several processes, e.g., the sexual union of two parents, molecular crossing over between two DNA chains, or transformation.
Miller-Keane Encyclopedia and Dictionary of Medicine, Nursing, and Allied Health, Seventh Edition. © 2003 by Saunders, an imprint of Elsevier, Inc. All rights reserved.

(rē′kŏm-bə-nā′shən)
n.
The natural or artificial rearrangement of genetic material in living organisms or viruses, especially the creation in offspring of sexually reproducing parents of new combinations of genes through the process of crossing over during meiosis.
The American Heritage® Medical Dictionary Copyright © 2007, 2004 by Houghton Mifflin Company. Published by Houghton Mifflin Company. All rights reserved.

(rē-kom'bi-nā'shŭn)
1. The process of reuniting of parts that had become separated.
2. The reversal of coupling phase in meiosis as gauged by the resulting phenotype.
See also: recombinant
Medical Dictionary for the Health Professions and Nursing © Farlex 2012

The formation in offspring of a combination of two or more genes that differs from the arrangement of these genes in either parent. This is the result of the exchange of segments of DNA during the germ cell divisions that resulted in the formation of paternal sperms and maternal ova.
Collins Dictionary of Medicine © Robert M. Youngson 2004, 2005 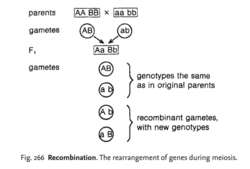 Fig. 266 Recombination . The rearrangement of genes during meiosis.