[fi″brĭ-la´shun]
1. a small, local, involuntary, muscular contraction, due to spontaneous activation of single muscle cells or muscle fibers.
2. the quality of being made up of fibrils.
3. the initial degenerative changes in osteoarthritis, marked by softening of the articular cartilage and development of vertical clefts between groups of cartilage cells. 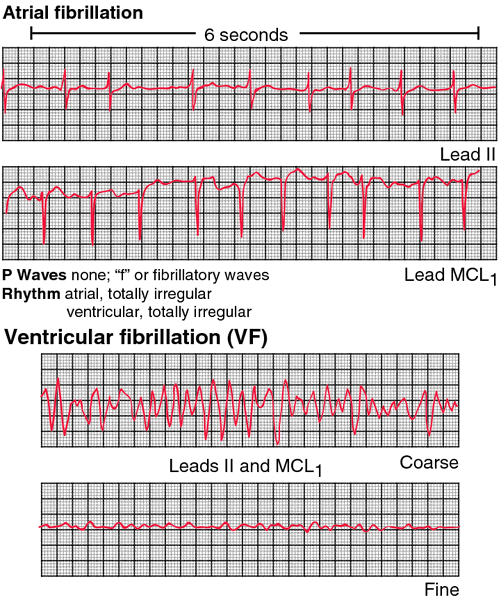 Fibrillation on an electrocardiographic tracing. From Fenstermacher and Hudson, 1995.
atrial fibrillation a reentrant cardiac arrhythmia marked by rapid randomized contractions of the atrial myocardium, causing a totally irregular rapid atrial rate. It is recognizable on an electrocardiogram by the absence of P waves and an irregular ventricular response. It may be controlled by drug therapy or cardioversion.
ventricular fibrillation a cardiac arrhythmia marked by fibrillary contractions of the ventricular muscle due to rapid repetitive excitation of myocardial fibers with ineffectual ventricular contraction; on the surface electrocardiogram it is characterized by lack of identifiable QRS complexes. This is a frequent cause of cardiac arrest. An apparatus called a defibrillator is used to alleviate it by delivering an electric shock to the heart muscle; this depolarizes the myocardium and ends the irregular contractions so that the heart can resume normal, regular contractions.
Miller-Keane Encyclopedia and Dictionary of Medicine, Nursing, and Allied Health, Seventh Edition. © 2003 by Saunders, an imprint of Elsevier, Inc. All rights reserved.

, auricular fibrillation
fibrillation in which the normal rhythmic contractions of the cardiac atria are replaced by rapid irregular twitchings of the muscular wall; the ventricles respond irregularly to the dysrhythmic bombardment from the atria.
Synonym(s): ataxia cordis
Farlex Partner Medical Dictionary © Farlex 2012

, auricular fibrillation (ā'trē-ăl fib'ri-lā'shŭn, aw-rik'yū-lăr)
Fibrillation in which the normal rhythmic contractions of the cardiac atria are replaced by rapid irregular twitchings of the muscular wall; the ventricles respond irregularly to the dysrhythmic bombardment from the atria.
Medical Dictionary for the Health Professions and Nursing © Farlex 2012

A heart defect involving the upper chambers in which the rate at which they contract is chaotically irregular both in force and speed. It may be caused by heart muscle damage from RHEUMATIC FEVER or ATHEROSCLEROSIS or by thyroid overactivity. A new focus in the muscle may set up its own rhythm and this may compete with the normal rhythm. Only some of the irregular beats are transmitted down to the lower chambers (ventricles) and the pulse is correspondingly irregular. Atrial fibrillation is common and accounts for one third of all strokes in people over 65 years of age. A rare familial form has been recognized. Treatment by radio frequency ablation using a catheter in a pulmonary vein is usually effective in controlling the disorder. Fibrillation of recent onset can usually be stopped by a single oral dose of flecainide or propafenone.
Collins Dictionary of Medicine © Robert M. Youngson 2004, 2005

A disorder of the heart beat associated with a higher risk of stroke. In this disorder, the upper chambers (atria) of the heart do not completely empty when the heart beats, which can allow blood clots to form.
Mentioned in: Arterial Embolism, Cardioversion, Carotid Sinus Massage, Stroke, Tricuspid Valve Insufficiency, Ventricular Fibrillation
Gale Encyclopedia of Medicine. Copyright 2008 The Gale Group, Inc. All rights reserved.

, auricular fibrillation (ā'trē-ăl fib'ri-lā'shŭn, aw-rik'yū-lăr)
Fibrillation in which normal rhythmic contractions of the cardiac atria are replaced by rapid irregular twitchings of the muscular wall.
Medical Dictionary for the Dental Professions © Farlex 2012