Astrocyte in association with a blood vessel. From Dorland's, 2000.
Miller-Keane Encyclopedia and Dictionary of Medicine, Nursing, and Allied Health, Seventh Edition. © 2003 by Saunders, an imprint of Elsevier, Inc. All rights reserved. 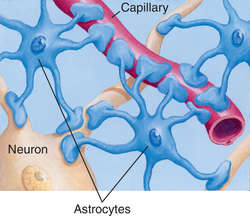 (as'tro-sit?) [ astro- + -cyte, cell]
A common, asterisk-shaped glial cell with many radiating cell processes. Astrocytes are neuroectodermal cells that begin as radial glia that later mature into multipolar cells. Astrocytes are spread homogeneously throughout the central nervous system and each astocyte occupies its own compartment of neuropil. The cell processes of an astrocyte are covered with "leaflets" of cytoplasm that contact axons, synaptic structures, blood vessels, and neighboring glia. Touching astrocytes are electrically coupled and can propagate calcium potentials and within its microdomain of neuropil, each astrocyte regulates the extracellular concentration of certain molecules, including neurotransmitters. In areas of injury, astrocytes can proliferate.
Synonym: astroglial cell See: illustrationastrocytic (as?tro-sit'ik), adjective
Medical Dictionary, © 2009 Farlex and Partners