Interneuron, internuncial neuron A nerve cell confined to the CNS, which conveys impulses in an arc from sensory to motor neurons
McGraw-Hill Concise Dictionary of Modern Medicine. © 2002 by The McGraw-Hill Companies, Inc. 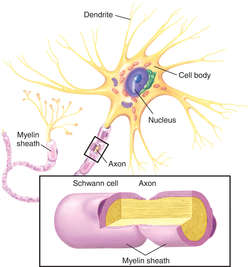 A motor neuron (actually an interneuron) found completely within the central nervous system that synapses with or regulates the actions of lower motor neurons in the spinal cord and cranial nerves. Lesions of these neurons produce spastic paralysis in the muscles they innervate. Synonym: upper motoneuron
Medical Dictionary, © 2009 Farlex and Partners