any method in which the specimen for biopsy is removed by aspirating it through an appropriate needle or trocar that pierces the skin, or the external surface of an organ, and into the underlying tissue to be examined.
Synonym(s): aspiration biopsy
Farlex Partner Medical Dictionary © Farlex 2012

(nē'dĕl bī'op-sē)
Any method in which the specimen for biopsy is removed by aspirating it through an appropriate needle or trocar that pierces the skin, or the external surface of an organ.
Synonym(s): aspiration biopsy.
Medical Dictionary for the Health Professions and Nursing © Farlex 2012 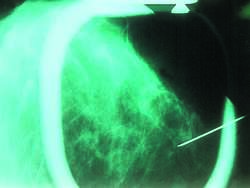 The removal of cells in fluid or tissue from a mass or cyst using a needle for microscopic examination and diagnosis.
Mentioned in: Breast Cancer
Gale Encyclopedia of Medicine. Copyright 2008 The Gale Group, Inc. All rights reserved.

(nē'dĕl bī'op-sē)
Method in which the specimen for biopsy is removed by aspirating it through an appropriate needle or trocar that pierces the skin.
Synonym(s): aspiration biopsy.
Medical Dictionary for the Dental Professions © Farlex 2012