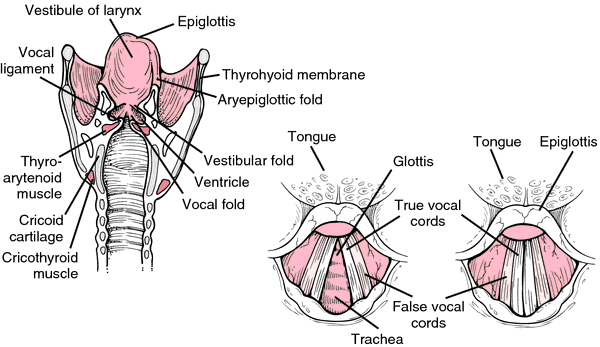 Larynx.
artificial larynx an electromechanical device that enables a person after laryngectomy to produce speech. When the device is placed against the region of the laryngectomy a buzzing sound is made that can be converted into simulated speech by movements of the lips, tongue, and glottis. Called also electrolarynx.
Miller-Keane Encyclopedia and Dictionary of Medicine, Nursing, and Allied Health, Seventh Edition. © 2003 by Saunders, an imprint of Elsevier, Inc. All rights reserved.

(ahr'ti-fish'ăl lar'ingks)
Mechanical device used to create alaryngeal speech. The most common types are battery powered and provide a buzzing sound source; the vibrating source is placed against the neck or in the oral cavity through a tube, and speech is articulated normally. Pneumatic assistive listening devices use expired air from the trachea to create vibration, which is relayed to the oral cavity by a tube.
Synonym(s): electrolarynx.
Medical Dictionary for the Health Professions and Nursing © Farlex 2012

Feedback
Flashcards & Bookmarks ?
Please log in or register to use Flashcards and Bookmarks. You can also log in with
Flashcards ?
My bookmarks ?
+ Add current page to bookmarks
Mentioned in ?
References in periodicals archive ?
An experimental study of artificial larynx and esophageal speech.
Monaural performance intensity functions of average esophageal speech
Sixty-three percent (n=39) of the subjects were esophageal speakers, twenty-six percent (n=16) were tracheoesophageal speakers and eleven percent (n=7) were artificial larynx speakers.
A Comparison of Older and Younger Individuals Living after the Surgical Treatment of Laryngeal Cancer
There were handsets with volume controls, visual lamps to denote line ringing, the Artificial Larynx for speaking, and switchboards with Braille inserts.
New options ease calling for hearing-impaired