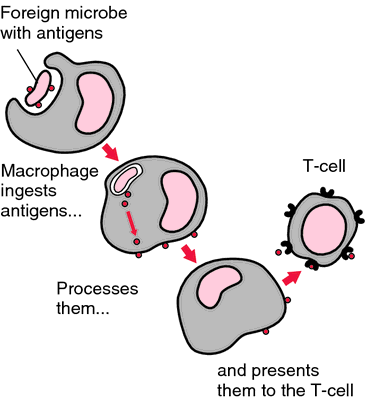 A macrophage ingests an antigen. From Polaski and Tatro, 1996.
alveolar m's rounded, granular, mononuclear phagocytes within the alveoli of the lungs that ingest inhaled particulate matter.
armed m's those capable of inducing cytotoxicity as a consequence of antigen binding by cytophilic antibodies on their surfaces or by factors derived from T lymphocytes.

(mak'rō-fāj), Avoid the mispronunciation mak'ro-fahzh.
Any mononuclear, actively phagocytic cell arising from monocytic stem cells in the bone marrow; these cells are widely distributed in the body and vary in morphology and motility, although most are large, long-lived cells with nearly round nuclei and abundant endocytic vacuoles, endosomes, lysosomes, and phagolysosomes. Phagocytic activity is typically mediated by serum recognition factors, including certain immunoglobulins and components of the complement system, but also may be nonspecific for some inert materials and bacteria, as in the case of alveolar macrophages; macrophages also are involved in cell-mediated immune responses, participate in presenting antigens to lymphocytes, secrete a variety of immunoregulatory molecules, and interact with natural killer cells.
Synonym(s): macrophagocyte, rhagiocrine cell
[macro- + G. phagō, to eat]

(măk′rə-fāj′)
n.
Any of the large phagocytic cells of the reticuloendothelial system.
mac′ro·phag′ic (-făj′ĭk) adj.

(mak'rō-fāj)
Any mononuclear, actively phagocytic cell arising from monocytic stem cells in bone marrow; these cells are widely distributed and vary in morphology and motility; most are large, long-lived cells with nearly round nuclei and abundant endocytic vacuoles, lysosomes, and phagolysosomes. Phagocytic activity is typically mediated by serum recognition factors, including certain immunoglobulins and components of the complement system, but also may be nonspecific for some inert materials and bacteria, as in the case of alveolar macrophages; macrophages also are involved in both the production of antibodies and in cell-mediated immune responses, participate in presenting antigens to lymphocytes, and secrete a variety of immunoregulatory molecules.
[macro- + G. phagō, to eat] An important cell in the immune system. Macrophages are scavenging cells, large PHAGOCYTES derived from blood MONOCYTES, and are found all over the body, especially in the liver, lymph nodes, spleen and bone marrow. Some are stationary within the tissues (fixed macrophages), others are free and move about, being attracted to sites of infection. Connective tissue (fixed) macrophages are called histiocytes; those in the liver are called Kupffer cells; and those in the nervous system are called microglial cells. Macrophages are AMOEBOID and ingest foreign material and bacteria, which they destroy. In order to bring about an immune response, most ANTIGENS must first be processed by macrophages so that their antigenic elements can be presented to LYMPHOCYTES on the macrophage surfaces. The term derives from the Greek macros , large and phageo to eat.

a type of scavenger cell that is widely distributed in large numbers in vertebrate tissues and which is derived from MONOCYTE blood cells. Its function is to remove debris, which it engulfs by PHAGOCYTOSIS, and it is capable of movement by means of PSEUDOPODIA. Macrophages occur in connective tissue, lymph and blood, and one of their important roles is the digestion of old and damaged red blood cells in the spleen. Some macrophages are free-moving, others are located in fixed locations (e.g. KUPFFER CELLS), the whole arrangement forming the RETICULOENDOTHELIAL SYSTEM.

A large white blood cell, found primarily in the bloodstream and connective tissue, that helps the body fight off infections by ingesting the disease-causing organism. HIV can infect and kill macrophages.
Mentioned in: AIDS, AIDS Tests, Echinacea, Leishmaniasis