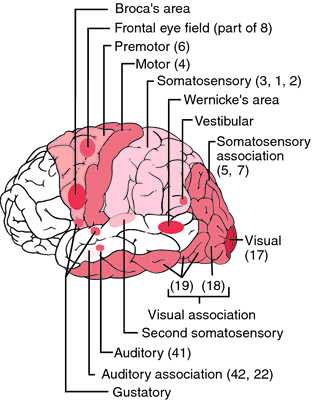 A zone or region.

(ār'ē-ă)
1. Any circumscribed surface or space.
2. All of the part supplied by a given artery or nerve.
3. A part of an organ having a special function, as the motor area of the brain.
See also: regio, region, space, spatium, zone
[L. a courtyard]
Medical Dictionary for the Health Professions and Nursing © Farlex 2012

1. Any limited surface or space.
2.
A part of the brain or retina having a particular function.
Brodmann's area's Areas of the cerebral cortex defined by Brodmann and numbered from 1 to 52. Areas 17, 18 and 19 represent the visual area and visual association areas in each cerebral cortex.
area centralis See macula lutea.
area of comfort Zone of comfort. See Percival criterion.
extrastriate visual area See visual association areas.
fusion area See Panum's area.
Panum's area An area in the retina of one eye, any point of which, when stimulated simultaneously with a single point in the retina of the other eye, will give rise to a single percept. Its diameter in the fovea is about 5 minutes of arc and increases towards the periphery (Fig. A17). Syn. fusion area. See retinal disparity; horopter; retinal corresponding points; Panum's fusional space.
rod-free area See foveola.
striate area See visual area.
visual area 1. Any region of the brain in which visual information is processed. 2. This is Brodmann's area 17 in each occipital lobe. It contains six layers of cells numbered 1 to 6 from top, layer 4 being subdivided into three sublayers 4A, 4B and 4C. Layer 4C receives inputs from the photoreceptors in the retina via the lateral geniculate bodies. There are also some afferents to layers 1 and 6. The primary visual area is identified by a white striation (line of Gennari) on each side of the calcarine fissure. This white line appears in the middle of the fourth layer of the visual cortex and is composed of fibres from the optic radiations. Syn. primary visual area; primary visual cortex; striate area; striate cortex; V1; visual cortex. 3. It also refers to all parts of each occipital lobe related to visual functions. Syn. prestriate cortex. See cortical column; occipital cortex; calcarine fissure; lateral geniculate bodies; cortical magnification.
visual association area's They are the parastriate area (Brodmann's area 18) and the peristriate area (Brodmann's area 19) of the occipital cortex surrounding the visual area. Areas 18 and 19 are subdivided into multiple zones (called V2, V3, V4, V5, V6, etc.). They receive projections from the striate cortex. They are also connected to other areas of the cortex and via the corpus callosum with areas 18 and 19 of the opposite hemisphere and receive feedback information. It has been shown that V4 and the inferotemporal cortex or IT (components of the ventral or temporal cortex) receive substantial input from the parvocellular pathway. V5 (also called middle temporal cortex or MT, a component of dorsal or parietal cortex) receives input from the magnocellular pathway. Processing that occurs in the visual association areas helps to interpret the message that reaches the visual area and to recall memories of previous visual experiences (Fig. A18). Syn. extrastriate visual area; extrastriate cortex; prestriate cortex (these terms actually represent all the regions outside the striate cortex where visual processing takes place); secondary visual cortex. See agnosia; magnetic resonance imaging fMRI; prosopagnosia; magnocellular visual system; parvocellular visual system. 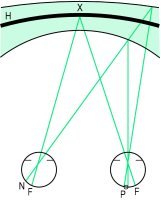 Fig. A17 The eyes are fixating X on the horopter H. Stimulation of point N in the left retina and of any point within Panum's area P of the right retina gives rise to a perception of singleness and stereopsis 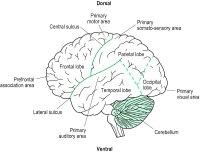 Fig. A18 Lateral surface of the human cortex showing some of the primary areas. Association areas occupy very large portions of the cortex beyond the primary areas. From the primary visual area information is passed onto the surrounding association areas terminating in the inferior temporal (IT) lobe specialized for object identification (ventral pathway or 'what' system), and the other in the parietal lobe or more precisely near the junction of the temporal, parietal and occipital lobes (referred to as MT) specialized for object localization (dorsal pathway or 'where' system). Integration of information from these pathways is likely further processed ultimately in the frontal lobe
Millodot: Dictionary of Optometry and Visual Science, 7th edition. © 2009 Butterworth-Heinemann

(ār'ē-ă)
1. [TA] Any circumscribed surface or space.
2. All of the part supplied by a given artery or nerve.
3. A part of an organ having a special function, as the motor area of the brain.
See also: region, space, zone
[L. a courtyard]
Medical Dictionary for the Dental Professions © Farlex 2012

Q. I have this blackhead on my cheek area for about a year..,How do I remove it?

A. This type of blackhead you are describing sounds like comedonal (non-inflammatory) acne, as opposed to acne that is inflammatory or severe inflammatory (which usually will not remain for a year on the skin). There are many basic local treatments which can be found at pharmacies over-the-counter. Whether it is gel or cream (which are rubbed into the pores over the affected region), bar soaps or washes - it is important to keep the skin clean of bacteria, that may worsen blackheads.

A. Did they biopsied the lumps? Are they sure they are cancerous? If so that means it might got metastasized, the cancerous cells can move around in the blood stream and then just start “hook” on an organ and continue multiplying. That is a malignant and dangerous situation.

You can read more here (http://www.nlm.nih.gov/medlineplus/ency/article/003111.htm), and consulting a doctor may also be wise.
More discussions about area
This content is provided by iMedix and is subject to iMedix Terms. The Questions and Answers are not endorsed or recommended and are made available by patients, not doctors.