[a-or´tik]
pertaining to the aorta.
aortic arch syndrome any of a group of disorders adding to occlusion of the arteries arising from the aortic arch; such occlusion may be caused by atherosclerosis, arterial embolism, or other conditions. See also pulseless disease.
aortic septal defect a congenital anomaly in which there is abnormal communication between the ascending aorta and the pulmonary artery just above the semilunar valves.
Miller-Keane Encyclopedia and Dictionary of Medicine, Nursing, and Allied Health, Seventh Edition. © 2003 by Saunders, an imprint of Elsevier, Inc. All rights reserved.

(ā-ōr'tik),
Relating to the aorta or the aortic orifice of the left ventricle of the heart.
Synonym(s): aortal
Farlex Partner Medical Dictionary © Farlex 2012

(ā-ōr'tik)
Relating to the aorta or the aortic orifice of the left ventricle of the heart.
Synonym(s): aortal.
Medical Dictionary for the Health Professions and Nursing © Farlex 2012 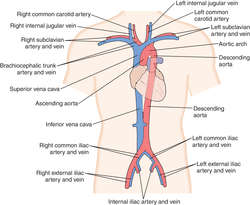 MAIN PARTS OF AORTA
The main trunk of the arterial system of the body. aortic (ā-or′tĭk), adjective

The aorta is about 3 cm in diameter at its origin in the upper surface of the left ventricle. It passes upward as the ascending aorta, turns backward and to the left (arch of the aorta) at about the level of the fourth thoracic vertebra, and then passes downward as the thoracic aorta to the diaphragm, and below the diaphragm as the abdominal aorta. The latter terminates at its division into the two common iliac arteries. At the junction of the aorta and the left ventricle is the aortic semilunar valve, which contains three cusps. This valve opens when the ventricle contracts and is closed by the backup of blood when the ventricle relaxes. See: illustration

The divisions of the aorta are as follows:

A. there are several explanations for the enlargement of the heart that occurs due to Aortic stenosis. the most reasonable is that the mechanical power that the heart uses makes it bigger. it easy to see it here: http://www.marvistavet.com/assets/images/aortic_stenosis.gif
this is called Left Ventricular Hypertrophy or LVH in abbreviations.
this is a classic LVH E.C.G.
http://www.frca.co.uk/images_main/resources/ECG/ECGresource39.jpg

A. Alcohol changes blood pressure and speed of the heart- that is not a good idea if you have an Aortic stenosis. Could probably makes things worst. I would avoid alcohol… but he should ask GP.

A. Today there are "mobile" testing centers that charge to use ultrasound technology to detect such things as AAA. I would highly recommend it only because it can act as a preventative measure. I am 50 years old and just suffered a ruptured AAA that very nearly killed me. I was the fortunate one. This very possibly could have detected it before it actually ruptured. You may want to check in your local areas for these mobile testing centers.
More discussions about aortic
This content is provided by iMedix and is subject to iMedix Terms. The Questions and Answers are not endorsed or recommended and are made available by patients, not doctors.

Feedback
Flashcards & Bookmarks ?
Please log in or register to use Flashcards and Bookmarks. You can also log in with
Flashcards ?
My bookmarks ?
+ Add current page to bookmarks
Mentioned in ?
References in periodicals archive ?
The commercialization of innovative grafts such as fenestrated aortic stent grafts has further broadened the treatment options for aortic aneurysm, thereby increasing the market for aortic stent grafts.
Aortic Stent Graft Market - Global Outlook and Forecast 2019-2024
Prolonged hemorrhagic shock caused by ruptured type B aortic dissection may lead to multiple organ dysfunctions including gastrointestinal bleeding, acute kidney injury, maldigestion, and even hypoxic encephalopathy.
Acute Type B aortic dissection with right hemothorax
The company added that the LOTUS Edge valve system is the only US FDA-approved aortic valve that gives physicians the option to reposition and completely recapture the valve once it has been fully deployed.
Boston Scientific awarded US FDA approval for LOTUS Edge Aortic Valve System for safe and effective treatment of severe aortic stenosis
It is less invasive than other treatment options for aortic dissection repair and offers quicker recovery times for patients.
Cooper surgeon serves as primary investigator for new aortic dissection device
Surgical aortic valve replacements have been performed for decades, and in multiple previous studies in intermediate-risk TAVR patients, data demonstrated that complication rates are equivalent or better for TAVR than for intermediate-risk surgical aortic valve replacement patients.
What's New with TAVR?
Thoracoabdominal aortic aneurysms can occur anywhere from the left subclavian artery to the bifurcation of iliac arteries.
Thoracoabdominal Aortic Aneurysm Repair: What Should the Anaesthetist Know?
The study's primary endpoint during the follow-up was the composite of aortic disease-related death, aortic dissection, paraplegia, myocardial ischemia, renal insufficiency, and other aortic complications.
Correlation between Sex and Prognosis of Acute Aortic Dissection in the Chinese Population
IMH may progress to classic acute aortic dissection (AAD) in 28% to 47% of patients, and this carries an associated risk of rupture in 20% to 45% of cases.
CT imaging of complications of aortic intramural hematoma: a pictorial essay
In addition, being older or having high levels of bad cholesterol also increased the risk of abdominal aortic aneurysm, the researchers noted.
Smoking may cause artery explosion : study
Comparative effectiveness of the treatments for thoracic aortic transection [corrected].
Rare Case of Both Left Atrial and Ventricular Compression by Dissecting Aortic Aneurysm
Recent reports have also emphasized the important role of immunoglobulin E (IgE) that activates CD4+ T cells, mast cells, and macrophages, which contribute to aortic aneurysm pathogenesis (3).
Aortic aneurysm and dissection in systemic lupus erythematosus-pathophysiologic and therapeutic considerations
"Ciprofloxacin should be used with caution in patients with aortic dilatation, as well as in those at high risk for AAD," the authors write.
Ciprofloxacin May Up Likelihood of Aortic Dissection, Rupture; Increased susceptibility observed in mouse model of sporadic aortic aneurysm and dissection