[glaw-, glou-ko´mah]
a group of diseases of the eye characterized by increased intraocular pressure, resulting in pathological changes in the optic disk and typical visual field defects, and eventually blindness if it is not treated successfully. adj., adj glauco´matous. Glaucoma strikes more than 2 per cent of all those over 40 years of age in the United States. It rarely occurs in anyone under 40. The cause is unknown, but there is a hereditary tendency toward the development of most common forms of glaucoma. Early detection and treatment are essential to prevention of permanent loss of vision. Any person over 40 with a family history of glaucoma should have his intraocular pressure checked once a year.

The normal eye is filled with aqueous humor in an amount carefully regulated to maintain the shape of the eyeball. In glaucoma, the balance of this fluid is disturbed; fluid is formed more rapidly than it leaves the eye, and pressure builds up. The increased pressure damages the retina and disturbs the vision, such as by loss of side vision. If not relieved by proper treatment, the pressure will eventually damage the optic nerve, interrupting the flow of impulses and causing blindness.
Classification. Glaucoma can be divided into three major types: adult primary glaucoma, secondary glaucoma, and congenital glaucoma. The most common type of adult primary glaucoma is open-angle glaucoma, in which there are “open” chamber angles but there is resistance to the outward flow of aqueous humor. This type of glaucoma, also called chronic simple glaucoma, is characterized by very few symptoms in the early stages; thus, many people have the disease without knowing it. There may be some hazy vision and mild discomfort in the eye and later there is a barely noticed loss of peripheral vision. As the disease progresses there is reduced visual acuity and greatly increased intraocular pressure that can cause the appearance of colored rings or halos around bright objects.

Another form of adult primary glaucoma is angle-closure glaucoma (narrow angle glaucoma), which can be either acute or chronic. In this type of glaucoma the chamber angle is narrowed or completely closed because of forward displacement of the final roll and root of the iris against the cornea. This closure obstructs the flow of aqueous humor from the eyeball and permits a buildup of pressure.

Secondary glaucoma occurs as a result of a variety of disorders, such as uveitis, neoplastic disease, trauma, and degenerative changes in the eye.

Congenital glaucoma is due to the defective development of the structures in and around the anterior chamber of the eye and results in impairment of the aqueous humor.
Treatment. Open-angle glaucoma is treated medically through the use of beta-adrenergic blocking agents such as timolol, miotics to facilitate aqueous outflow, and carbonic anhydrase inhibitors to reduce the rate at which aqueous humor is produced. Patients must be informed about this problem and made to understand that they must continue the prescribed medications for the rest of their lives. An alternative treatment is laser photocoagulation of the angle.

Iridotomy involves perforation of the root of the iris, which provides an additional route for the escape of excess aqueous from the posterior to the anterior chambers and the trabecular meshwork.

In trabeculoplasty the spaces of the trabecular meshwork are enlarged by a series of microscopic lesions. Eventually scars form and contract, thus widening the spaces and allowing better aqueous flow.

Laser surgery can be done on an outpatient basis. A local anesthetic is used and patients feel only mild pricking sensations as the laser pulses strike and coagulate tissue. A retrobulbar anesthetic may be used to immobilize the eye during laser surgery.
Patient Care. Early diagnosis and prompt treatment in order to prevent the serious consequences of increased intraocular pressure are a major concern of health care professionals. Screening techniques for early detecting include measurement of intraocular pressure in populations most at risk. Verification of the diagnosis of glaucoma is necessary once suspected cases are found. The general public should be aware of the danger signals of glaucoma and the importance of prompt and diligent treatment. All persons over 40 should have regular testing for glaucoma.

Those most at risk for glaucoma are (1) diabetics, (2) persons with recently controlled hypertension, (3) African Americans (who have an incidence rate of glaucoma-related blindness that is eight times that seen in other ethnic groups), (4) those with a family history of glaucoma, (5) persons with facial hemangiomas or other nevi, and (6) victims of eye injury.

Patients who already have symptoms of glaucoma and are being treated with drugs must be informed about the nature of their eye disorder, the expected effects of each medication, and the importance of faithfully following the regimen of care. Since some patients experience undesirable side effects from these medications, they are told to report them promptly so that the medications can be evaluated by the ophthalmologist.

The combinations of drugs used to treat glaucoma in individual patients can vary considerably. In some cases patients may take as many as four or five drugs. They will need to know about each drug and may need help in devising a schedule for taking them.

Drugs are prescribed either to enhance the outflow of aqueous or to decrease its production, or both. Miotic drugs such as pilocarpine facilitate aqueous outflow by stretching the iris away from the trabecular meshwork. Pilocarpine also constricts the pupil, which reduces visual acuity. epinephrine, acetazolamide, methazolamide, and the beta-adrenergic blocking agenttimolol decrease production of aqueous.

Prescribed eyedrops and oral medications must be taken on an uninterrupted basis. Patients in acute care and long-term care facilities are sometimes allowed to keep their glaucoma medications at their bedsides if they are able to administer the eyedrops and medications themselves. If they are not able to do so, it is imperative that treatment for glaucoma not be neglected while caregivers are focusing their attention on more immediate medical needs of patients.

Care of the patient after laser surgery is relatively simple compared with treatment after more traditional surgery. The patient may experience mild headache and blurred vision for the first 24 hours after surgery and there will be transient distortion of the pupil and a mild iritis. Topical steroids and a cycloplegic to prevent movement of the ciliary muscle may be prescribed. The patient should be told to report any sudden severe eye pain immediately and to keep all appointments for follow-up care. 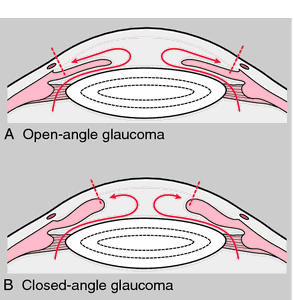 Glaucoma. A, in open-angle glaucoma, the obstruction occurs in the trabecular meshwork. B, in closed-angle glaucoma, the trabecular meshwork is covered by the root of the iris or adhesions between the iris and cornea. From Damjanov, 1996.
(See Atlas 4, Part B).
congenital glaucoma (infantile glaucoma) a congenital type that may be fully developed at birth with enlarged eyes and hazy corneas, or may develop at any time up to two or three years of age.
juvenile glaucoma congenital glaucoma differing from the infantile form in that it occurs in older children and young adults, and there is no gross enlargement of the eyeball.
glaucoma sim´plex glaucoma without pronounced symptoms, but attended with progressive loss of vision.
Miller-Keane Encyclopedia and Dictionary of Medicine, Nursing, and Allied Health, Seventh Edition. © 2003 by Saunders, an imprint of Elsevier, Inc. All rights reserved.