Instrument for measuring aniseikonia. The direct comparison eikonometer (or standard eikonometer) uses as a target a cross with a small white disc at the centre of a black square at its intersection (Fig. E2). Four pairs of opposing arrows are placed four degrees away from the centre of the cross with the even numbered arrows polarized in one direction and the odd numbered ones in the other direction. The subject wears polarizing lenses so that each set of four arrows is seen by one eye. If the subject has aniseikonia, one set of arrows will not appear aligned with the other. Aniseikonia either in one or more meridians can be measured by means of an adjustable magnifying device before one eye. There is also a space eikonometer in which the parts of the target are seen three-dimensionally in space. An office model of this type has been manufactured. The space eikonometer is based on a modification of stereopsis. Aniseikonia will make the target appear tilted. The amount of aniseikonia is indicated by the power of the size lens that swings the target back into a frontoparallel plane. Syn. aniseikometer. See aniseikonic lens; frontoparallel plane. 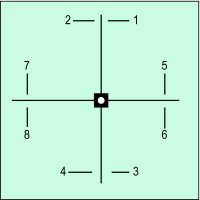