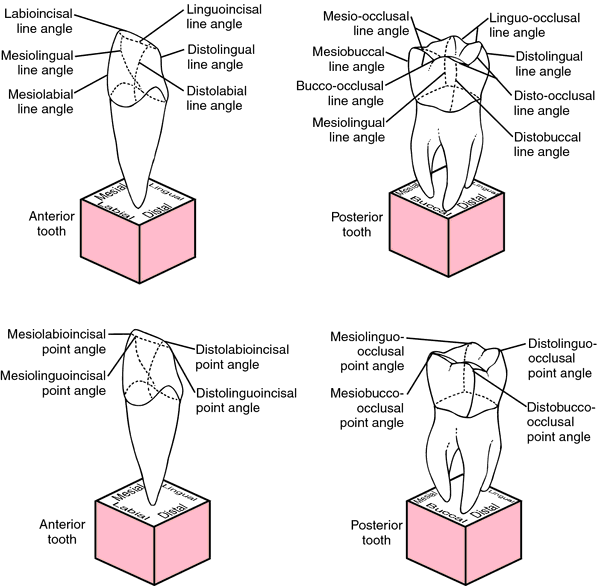 Tooth angles: Top, line angles; Bottom, point angles. From Dorland's, 2000.
(see accompanying illustration).
visual angle the angle between two lines passing from the edges of an object seen, through the nodal point of the eye, to the corresponding edges of the image of the object seen.
Miller-Keane Encyclopedia and Dictionary of Medicine, Nursing, and Allied Health, Seventh Edition. © 2003 by Saunders, an imprint of Elsevier, Inc. All rights reserved.

(ang'gel) [L. angulus, corner, angle]
1. The figure or space outlined by the diverging of two lines from a common point or by the meeting of two planes.
2. A projecting or sharp corner.

The angle formed by the junction of the lateral and posterior borders of the acromion.

The angle formed by intersection of the visual line with the optic axis.

The angle between the horizontal plane and a line drawn through the base of the nasal spine and the middle point of the alveolus of the upper jaw.

The angle between the cornea and iris at the periphery of the anterior chamber of the eye.

The angle formed by the meeting of the axes of the orbits.

The medial inferior corner of the pulmonary cavity bordered by the heart and diaphragm.

The angle in the sagittal plane made at the elbow by extending the long axis of the forearm and the upper arm. This obtuse angle is more pronounced in women than in men. Synonym: carrying angle of arm.

In radiology, angulation of the central ray toward the patient's feet.

The angle formed by two or more walls of a cavity preparation in restorative dentistry.

In radiology, angulation of the central ray toward the patient's head.

The angle formed by intersecting anthropometric lines. It is used in studies of the skull and for the diagnosis of malocclusions of dental, skeletal, and dentoskeletal origin.

The angle formed by the junction of the cerebellum and the pons. Synonym: pontine angle

The angle between the visual axis and the median line when an object is looked at.

The meeting point of the lower border of the false ribs with the axis of the sternum.

The lateral inferior corner of the pulmonary cavity bordered by the ribs and diaphragm.

The angle formed on each side of the trunk by the junction of the last rib with the lumbar vertebrae.

The angle formed by the basifacial and basicranial axes at the midpoint of the sphenoethmoidal suture.

The angle made by lines from the nasal spine and external auditory meatus meeting between the upper middle incisor teeth.

The angle between two lines that join at an angle of almost 180°.

The angle between the line of vision and the optic axis.

The angle between a ray striking a surface and a line drawn perpendicular to the surface at the point of incidence.

angle of inclinication (of the hip)

The angle between the femoral neck and the shaft of the femur. This angle is normally 35° in infancy; with maturation of the skeleton it increases to 45°.
Synonym: cervicofemoral angle

The angle formed where the vertical back edge of the ramus of the mandible meets the horizontal edge along the bottom. Synonym: gonial angle; angle of mandible

The angle between the base of the skull and the pterygoid process.

The angle formed at the opisthion by the intersection of lines from the basion and from the lower border of the orbit.

The angle formed at the anterior nasal spine by the intersection of lines drawn from the auricular point and the glabella.

In dentistry, a wheel containing pieces of wire. It is used for cleaning metal surfaces.

The angle formed by the junction of the rami of the pubic bones.

The angle formed by a refracted ray of light with a line perpendicular to the surface at the refraction point.

The angle formed by articulation of the last lumbar vertebra and the sacrum.

The angle formed by the base of the sacrum and the fifth lumbar vertebra.

The angle formed at the top of the sella turcica by the intersection of lines drawn from the nasal point and the tip of the rostrum of the sphenoid.

The angle formed by the junction of the manubrium and the body of the sternum.

The sharp curve at the duodenojejunal junction.

The angle formed by the junction of the internal jugular and subclavian veins.

The angle between the line of sight and the extremities of the object seen.
Medical Dictionary, © 2009 Farlex and Partners

1. The figure formed by two intersecting lines or planes at one point.
2. The direction from which an object is viewed.
3. The form produced by a change in direction of a line or plane.
angle alpha Angle between the visual axis and the optical axis formed at the first nodal point of the eye. The visual axis usually lies nasal to the optical axis on the plane of the cornea (positive angle alpha). It is, on average, equal to about 5º in the adult eye. If it lies temporal to the optical axis, the angle is denoted negative (Fig. A9). Symbol: α. See angle lambda.
angle of altitude 1. The angle through which the eyes have turned up or down from the primary position by a rotation about the transverse axis (x-axis). 2. The angle between the plane of regard and the subjective horizontal plane. Syn. angle of elevation.
angle of anomaly Angle between the line of visual direction of the fovea and the line of visual direction of the abnormal corresponding point of the same deviated eye. It is usually represented by the difference between the objective and subjective angles of deviation in abnormal retinal correspondence. See line of direction; abnormal retinal correspondence.
angle of the anterior chamber Angle at the periphery of the anterior chamber formed by the root of the iris, the front surface of the ciliary body and the trabecular meshwork. Syn. angle of filtration; drainage angle; irido-corneal angle. See gonioscope; Shaffer and Schwartz van Herick method; Smith's method; shadow test.
apical angle See prism angle.
angle of azimuth The angle through which the eyes have turned right or left from the primary position by a rotation about the vertical axis.
Brewster's angle See angle of polarization.
contact angle Angle formed by a surface and a tangent to a sessile drop of fluid (usually water) at the point where the drop meets the surface. This angle indicates the degree of wettability of that surface. The more wettable (or hydrophilic) the material, the smaller the angle, being equal to 0º for a completely hydrophilic material when water spreads evenly over that surface. Hydrophobic surfaces can have contact angles greater than 90º, e.g. silicone rubber in which the angle is about 120º (Fig. A10). Syn. wetting angle. See sessile drop test.
angle of convergence Angle between the lines of sight of the two eyes which are in a state of convergence. The angle is positive when the lines of sight intersect in front of the eyes, and negative when they intersect behind the eyes. Note: some authors regard the angle of convergence as the rotation of one eye only towards the fixation point, and refer to the angle of convergence of both eyes, defined above, as the total angle of convergence or the total convergence. The total angle of convergence required for binocular fixation of a target is equal to 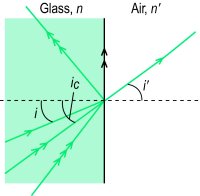 Fig. A11 Critical angle ic and total internal reflection (i, angle of incidence; i′, angle of refraction) 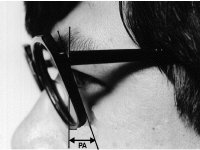 Fig. A13 Ray of non-polarized light AO is incident to the surface at the polarizing angle. Most of the light is transmitted across the surface and partially polarized, the rest being reflected and polarized maximally (i.e

Feedback
Flashcards & Bookmarks ?
Please log in or register to use Flashcards and Bookmarks. You can also log in with
Flashcards ?
My bookmarks ?
+ Add current page to bookmarks
Mentioned in ?
References in periodicals archive ?
The root cause is a construction defect resulting in the failure of the shelf angle iron and not settling of the foundation.
Masonry wall cracks: Shelf angle failure
The Kentucky National Guard airlifts the pieces of angle iron by helicopter to clearings near the cave openings, which are often remote and inaccessible by truck.
Lockout for bats
The antenna holder consisted of two 0.64-centimeters (0.25-inch) angle irons measuring 20.3 centimeters in length, a 7.6-centimeters section of 3.2-centimeters (1.25-inch) pipe, a sheet metal plate (eight by 20 centimeters), and a nut-and-bolt assembly.
An efficient retractable mobile antenna tower for radio-telemetry studies
The first step is cutting pieces of angle iron and 11/4" conduit approximately 8 inches long for use as sleeves or "holsters" to hold the blind frame.
A conduit holster blind: fowler strikes upon perfect design through trial and error
The 5/8" diameter hole goes through each of the two pieces of angle iron at any given spot.
Portable magnetic drill increases holemaking speeds: a welding and fabrication shop had the challenge of drilling the framework for an artificial rock climbing wall. The 75 lb. "portable" magnetic drill caused safety issues and took about 60 min. to complete just one section. But a new, lighter weight drill offers ease of use and speed, reducing drilling time to 20 min
Center the bench top on the cabinet and mark the center and outside angle iron holes on its underside.
A rock-solid workbench: build your own mobile workbench with tons of storage--it'll handle any project you can throw at it
Cut two 24-in pieces of 1/8 x 2-in angle iron. Order by the foot with NSN 9520-00-277-4911.
Protect tow cylinder lines
A base of concrete blocks was laid out to support a framework of three-inch angle iron salvaged from an old roadside billboard demolished in a road widening project.
Rejuvenating a woodshed
Features include a no rattle, 1/8" x 1-1/2" angle iron base frame; removable 2-1/4" square, 1/4" diameter, 23" high wire panels; 3/4" noise-deadening layered wood bottom panel; and a choice of polyurethane, mold-on rubber or full pneumatic (tire and tube) casters (two swivel and two rigid), depending on load capacity.
Wire-Sided Platform Trucks. (New Products)
Construct the vice jaws from angle iron 1/8" or thicker.
More from bill's bench
For the V-block you will need a length of one-half inch angle iron and two lengths of one-half inch square stock.
Give your e-z poker a decorative twist