(an'jē-ō-graf'ik)
Relating to or using angiography.
Medical Dictionary for the Health Professions and Nursing © Farlex 2012

(an″jē-og′ră-fē) [ angio- + -graphy]
1. A description of blood vessels and lymphatics.
2. Diagnostic or therapeutic radiography of the heart and blood vessels with a radiopaque contrast medium. Types include magnetic resonance angiography, interventional radiology, and computed tomography.

Before the procedure: health care professionals explain to the patient how a needle or catheter will be used to penetrate a blood vessel, and that a contrast agent will be injected into it to highlight the course of the vessel (map the vessel) and any abnormalities in it or associated with it. These abnormalities may include widenings and weaknesses in the blood vessels (aneurysms); narrowings of the vessel (stenoses or obstructions); abnormal connections between arteries and veins (fistulae); or unusual networks of vessels (arteriovenous malformations or in some cases, the complex blood supply of malignant tumors). Complications of angiography include damage to the blood vessel or neighboring tissues, bleeding or bruising, cardiac arrhythmias, syncope, infection, or, in very rare instances, death. These potential complications should be fully reviewed with the patient during the informed consent that precedes the procedure.

During the procedure: the patient’s heart rate and rhythm are closely monitored, along with his or her blood pressure, oxygenation, mental status, and in critically ill patients, urinary output. The patient may experience a hot flush during the injection of contrast, palpitations, or other unusual sensations. These sensations should be explained to the patient before they occur to minimize anxiety. Anxiolytics or sedatives may sometimes be administered to patients as needed.

Angiography of the aorta and its branches.

Angiography of the heart and coronary arteries.

Angiography performed after a small tube is placed in a blood vessel and a contrast medium is injected to outline the internal structure of the blood vessel.

Angiography of the vascular system of the brain. 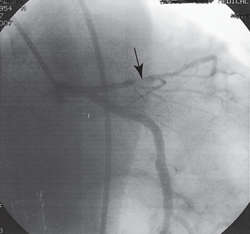 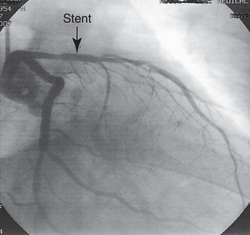 The best contemporary test to assess a patient suspected of having a pulmonary embolism The test uses computed tomographic imaging of the pulmonary arteries to identify blood clots in the right ventricular outflow tracts or the pulmonary arteries. The presence of a clot indicates the need for treatment with anticoagulant drugs. It is used as the generally preferred alternative to invasive pulmonary angiography (which, while accurate, requires right ventricular catheterization), or to ventilation/perfusion scanning of the lungs (which often yields indeterminate results).

Potential hazards of the test include its radiation exposure, its risk for renal failure (esp. in patients with predisposing conditions for kidney injury), and the risk of allergy to the radiological contrast agent used in the test.

Use of a computer to investigate arterial blood circulation. A reference image is obtained by fluoroscopy. Then a contrast medium is injected intravenously. Another image is produced from the fluoroscopic image, after which the computer technique subtracts the image produced by surrounding tissues. The third image is an enhanced view of the arteries. 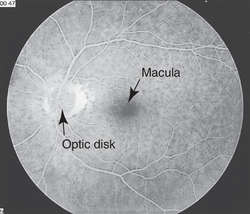 Abbreviation: IVFA
The optimal diagnostic test to evaluate the vascular status of the retina and choroid. Fluorescein dye is injected into an arm vein and sequential photographs are taken of the fundus as the dye circulates at different time intervals.
See: illustration

Abbreviation: MRA
Noninvasive imaging of blood vessels by magnetic resonance imaging. The technique does not expose patients to ionizing radiation and avoids catheterization of the vessels. It has been used to study aneurysms, blockages, and other diseases of the carotid, coronary, femoral, iliac, and renal arteries. Studies may be done with or without contrast agents.

A laser imaging test to identify abnormal blood vessels in the choroidal layer beneath the retina. These abnormal vessels may leak, causing central visual field loss in age-related macular degeneration.

Angiography of the pulmonary vessels (e.g., in the diagnosis of pulmonary embolism).

Angiography in which a catheter is introduced directly into the vessel to be visualized.
Medical Dictionary, © 2009 Farlex and Partners

Feedback
Flashcards & Bookmarks ?
Please log in or register to use Flashcards and Bookmarks. You can also log in with
Flashcards ?
My bookmarks ?
+ Add current page to bookmarks
Mentioned in ?
References in periodicals archive ?
The comparison of the two groups was done on the basis of their gender, presence of co-morbids such as diabetes and hypertension, obesity, dyslipidemia, family history of ischemic heart disease, smoking, and angiographic characteristic of coronary artery disease.
DIFFERENCES IN ANGIOGRAPHIC CHARACTERISTICS OF YOUNG AND THE ELDERLY PATIENTS UNDERGOING PRIMARY PERCUTANEOUS CORONARY INTERVENTION IN AFIC
According to follow-up angiography grading, CAD patients were categorized into the low-score group (angiographic grade 0 or 1, n = 12) and high-score group (angiographic grade 2 or 3, n = 18).
Correlation between Therapeutic Efficacy of [CD34.sup.+] Cell Treatment and Directed In Vivo Angiogenesis in Patients with End-Stage Diffuse Coronary Artery Disease
Therefore, the choice of medical treatment, percutaneous coronary intervention (PCI) or coronary artery bypass grafting (CABG) is largely dictated by the clinical presentation and the degree of compromise to coronary flow on angiographic study.
Spontaneous coronary artery dissection: an under-recognized cause of acute coronary syndromes
the vast majority of pMI had an identifiable angiographic complication and only 21% of the peri-PCI MI did not have an identifiable cause.
Consensus or Controversy?: Evolution of Criteria for Myocardial Infarction After Percutaneous Coronary Intervention
The Beacon Tip Angiographic Catheters have been found to exhibit tip splitting or separation, which has resulted in 42 Medical Device Reports.
Cook Medical Expands Angiographic Catheters Recall
Twelve patients showed progressive thrombosis of their aneurysms, so further intervention was not deemed necessary; 6 patients had residual necks that were thought to be stable compared with their original angiographic picture, and 3 patients developed more residual filling of the aneurysm, in 2 cases to less than 90% so the aneurysm had to be recoiled.
Endovascular cerebral aneurysm treatment: long-term outcomes
The angiographic prevalence of myocardial bridging in man.
Bridge over troubled coronary artery/ muscular bridge causing non-ST-segment elevation myocardial infarction/Tehlikedeki koroner arterin koprusu/ST-elevasyonsuz miyokard infarktusune neden olan miyokardiyal kopruleme
This multi-center, prospective trial will assess the safety and effectiveness of the Genous Bio-engineered R stent in conjunction with optimal statin therapy and will include angiographic follow up at six and 18 months.
FOLLOW UP WITH GENOUS STENT CONFIRMS VASCULAR HEALING
And there have been no prior studies at all relating fish intake to angiographic measurement of coronary luminal narrowing in postmenopausal women with established coronary disease, according to Dr.
Fish consumption may slow increase in stenosis: women with coronary artery disease
(3) Compression of the external carotid artery in patients with similar clinical findings has also been seen on angiographic imaging.
Eagle's syndrome. (Imaging Clinic)
"If you just do angiographic studies [to map the progressive deposition of arterial plaque], it might take only two years."
'Hearty' vitamins; sparing arteries with megadose supplements